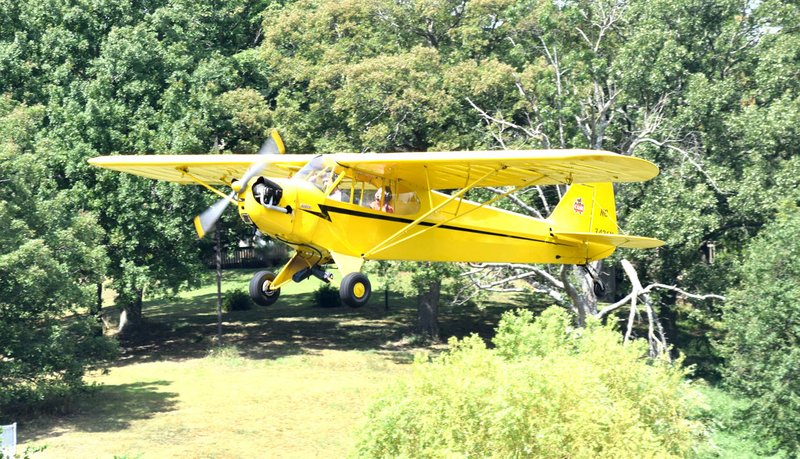 Photo by Mike Eckels One of the most iconic aircraft of the 1940s, a Piper Cub, performed a series of touch and go landings at Crystal Lake Airport on Aug. 16, 2016. Governor Asa Hutchinson proclaimed the month of February &#8220;General Aviation Appreciation Month&#8221; in Arkansas.

DECATUR — In the 114 years since Orville and Wilbur Wright made their historic heavier-than-air powered flight in 1903, general aviation has evolved into one of the fastest growing industries worldwide. Because of the impact that this industry has made on today's modern society, Arkansas Governor Asa Hutchinson proclaimed the month of February "General Aviation Appreciation Month."

"General aviation is a critical tool that supports Arkansas farms, businesses and communities," said Selena Shilad, executive director of the Alliance for Aviation Across America. "We thank Governor Hutchinson for issuing this proclamation and recognizing general aviation's role in connecting communities across the state."

In 1505, famed renaissance artist Leonardo da Vinci wrote a set of studies, "Codex on the Flight of Birds," after observing the flight characteristics of birds near his workshop in Milan, Italy. His studies helped define the modern theory of flight still in use today. Da Vinci's ground-breaking work allowed mankind to break barriers, rise to new heights, cover vast distances and bring the world closer together than ever before.

The general aviation community, made up of civil aircraft used by private, business and instructional pilots, has grown from a largely unregulated mode of transportation during the early decades of the 20th century to a thriving $219 billion industry in 2015. In Arkansas alone, general aviation generates more than $494 million annually.

"Using business aviation, companies in Arkansas can more effectively manage their daily operations, reach their customers, transport essential supplies and engage new marketplaces," said Ed Bolen, president and CEO of the National Business Aviation Association. "We thank the governor for this proclamation and look forward to working with him on issues critical to business aviation."

In 2015 there were 362,000 general aviation aircraft worldwide. Of that number, 204,000 aircraft were based in this country. In order to accommodate this many aircraft, more than 5,000 public use airports are in place throughout the United States.

Arkansas has 100 public-use airports of varying sizes which make up the infrastructure of this states' transportation system. Small landing strips like Decatur's Crystal Lake to larger facilities like Drake Field in Fayetteville and Adams Field in Little Rock all make up this vast network of airports in the state.

According to the Arkansas State Airport System Plan, more than 77 percent of all annual aircraft operations (a single take-off or landing is considered one operation) in the state are attributable to general aviation. But more than flight time, general aviation can help stimulate local economies and generate tax revenues in fuel sales, rental cars, hotels, restaurants and tourism across the state.

"General aviation businesses are critical to the economy of Arkansas, supporting jobs and providing resources to communities across the state," said Martin Hiller, president of the National Air Transportation Association.