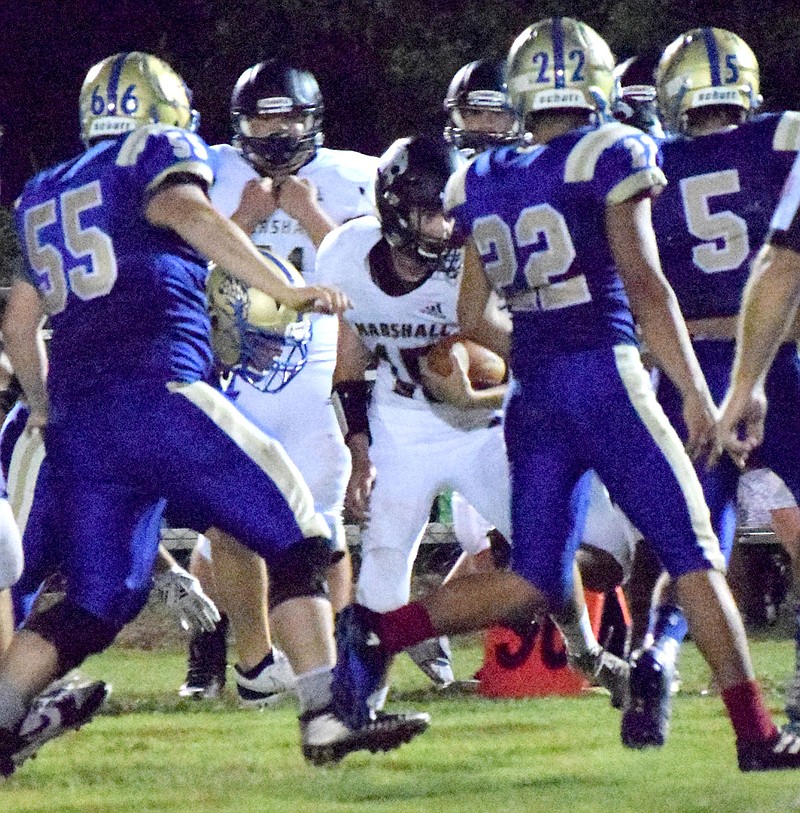 Westside Eagle Observer/MIKE ECKELS Bobcat running back Colton Sutterfield (15) finds a pack of Bulldogs ready to take him down during the Friday night Decatur-Marshall eight-man football contest at Bulldogs Stadium in Decatur. A pair of touchdowns in the final two minutes of the game gave the Bobcats the win 54-40 over the Bulldogs.

DECATUR -- In their first meeting since the expansion of the eight-man football league in early May, the Marshall Bobcats traveled to Decatur to take on the Bulldogs in Decatur's first home varsity game of the 2020 season. It was an action-packed night for fans on both sides of the bleachers as the contest netted a total of 94 points by the end of the 48-minute contest. But in the end, a pair of touchdowns late in the fourth quarter gave the Bobcats the game by 12.

The contest remained scoreless for the first seven and half minutes. Then, with 4:25 left in the quarter, a pitchout from Bobcat quarterback Hunter House to DaGyn Williams at the Decatur 6-yard line crossed the goal line for the first touchdown of the night. A quarterback keeper by Hunter resulted in a two-point conversion, giving Marshall the first lead of the game, 8-0.

On Marshall's next series, the Bobcats began a march down the field for what looked like their second touchdown. But Decatur's Bryson Funk had other ideas as he intercepted Hunter's pass to Caleb Barnes near the Decatur 10-yard line, resulting in a 45 yard run by Funk. Unfortunately, the Bulldogs were unable to utilize the possession and Marshall's lead remained.

Toward the end of the first quarter, Funk was able to connect with one of his running backs for the first six points of the night for the Bulldogs. Decatur's conversion attempt failed, enabling Marshall to hold on to a slim two-point lead.

Shortly after the start of the second quarter, Williams found the end zone for both a touchdown and conversion, boosting the Bobcats score to 16-6.

At the 7:27 mark, Funk found a hole at the Marshall 20-yard line and scrambled in for the Bulldogs' second touchdown. A quick pass from Funk to wide receiver Zac Luker resulted in a successful two-point conversion, bringing Decatur back to within two points of the Bobcats, 16-14.

A short time later, Funk found one of his running backs for the Bulldogs' go-ahead touchdown. The conversion failed to cross the goal line, giving the Bulldogs their first lead of the night, 20-16.

With a little over four minutes left in the first half, the Bobcats marched the ball downfield to the 2-yard line. Hunter handed off to Williams who stumbled over a crowd of players for the touchdown and regain the lead by two. Hunter was able to move the ball into the end zone for the conversion, making it a 24-20 contest going into the halftime break.

Shortly after the start of the third quarter, Hunter handed off to Williams. William broke several Bulldog tackles, finding the corner of the goal line for his fourth touchdown for the night. The conversion was good, extending Marshall's lead to 14.

Marshall broke the tie on its next possession with a pass from Hunter to Colton Sutterfield. The conversion was good, putting the Bobcats out in front by eight.

With less than two minutes left in the game, Marshall was able to make two back-to-back touchdowns and conversions and take the lead for good. In a game that yielded 94 total points, the Marshall Bobcats claimed the victory over the Decatur Bulldogs, 54-40. 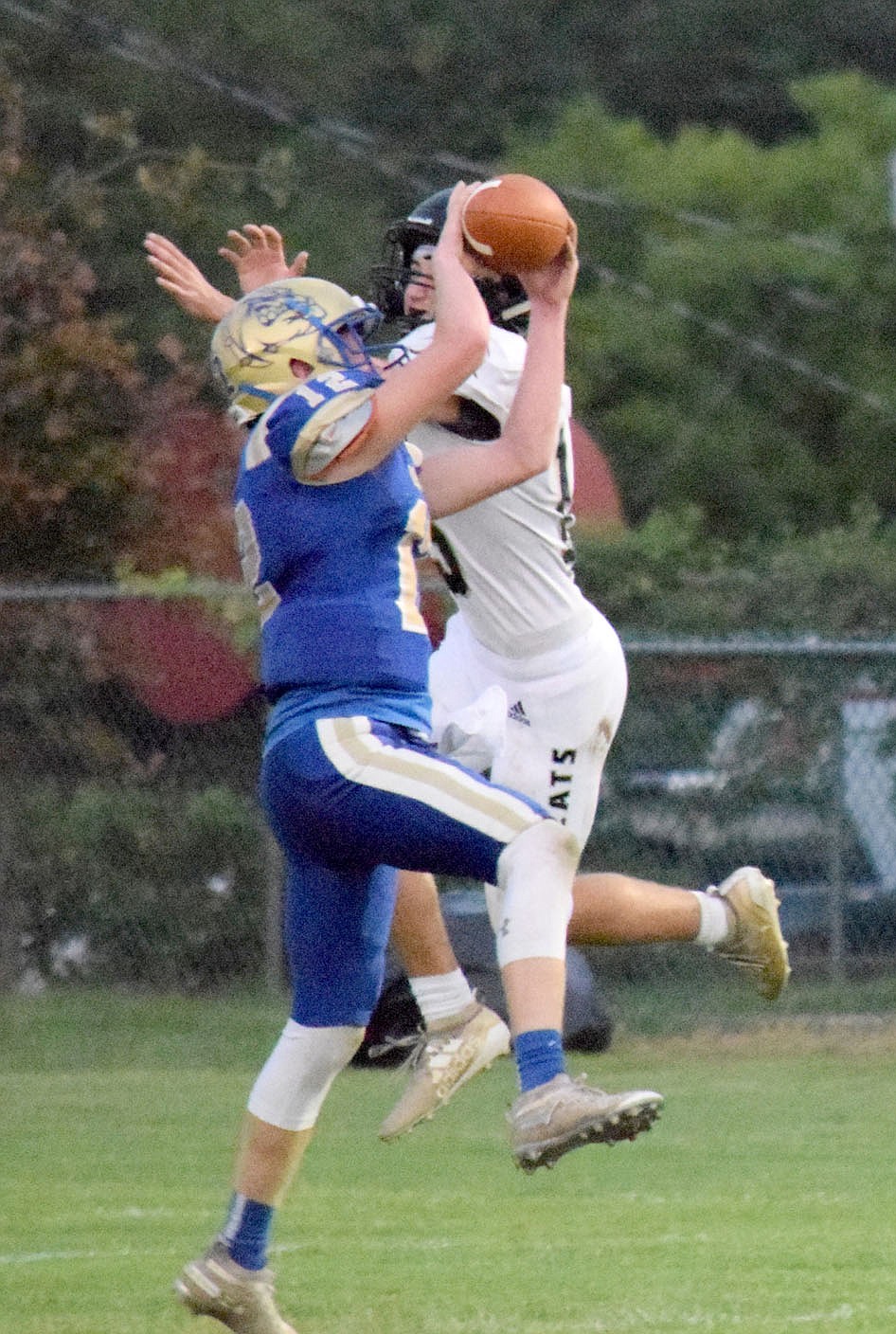 Westside Eagle Observer/MIKE ECKELS Bryson Funk (Decatur 12) intercepts a pass meant for Bobcat running back Colton Sutterfield during the second quarter of the Decatur-Marshall eight-man football game in Decatur Friday night. Funk fought his way to the 50 yard line before the Bobcats brought him down. 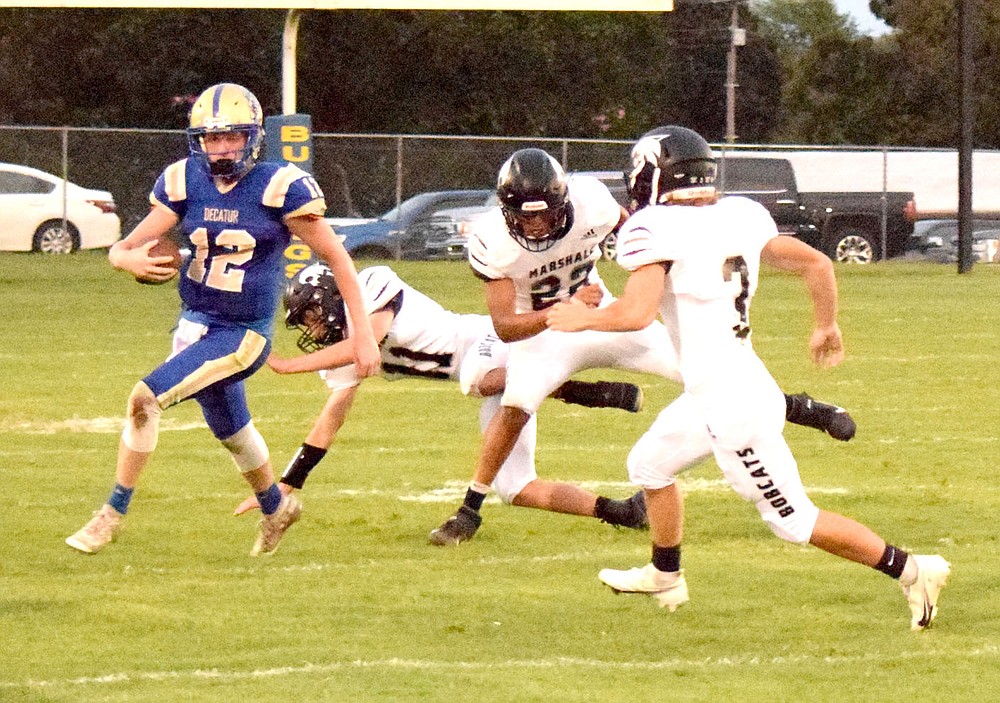 Westside Eagle Observer/MIKE ECKELS Bulldog Bryson Funk (12) managed to break Caleb Barnes (Bobcats 11) and CaGyn Williams tackles and scrabbled along the sideline for a five yard gain before Treyton Blair (3) pushes him out-of-bounds. The Friday night contest in Bulldogs Stadium marked the first home game of 2020 and the first time Decatur and Marshall played each other. 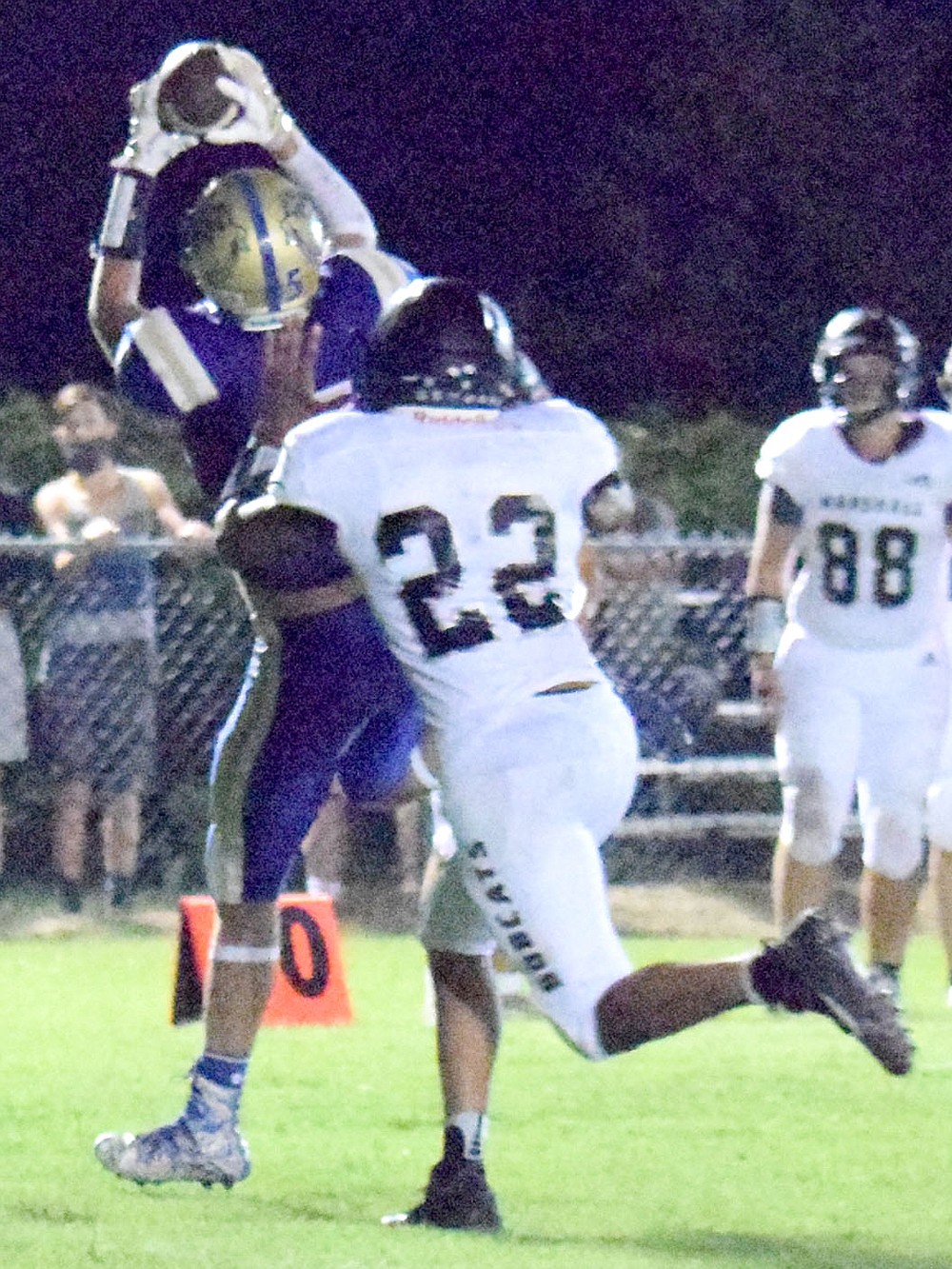 Westside Eagle Observer/MIKE ECKELS Zac Lucker (Decatur 5) catches a pass from Bryson Funk as DaGyn Williams (Marshall 22) reaches out for a tackle during the third quarter of the Decatur-Marshall football contest at Bulldog Stadium in Decatur Friday night. The Marshall Bobcats claimed the victory over the Decatur Bulldogs 54-40.