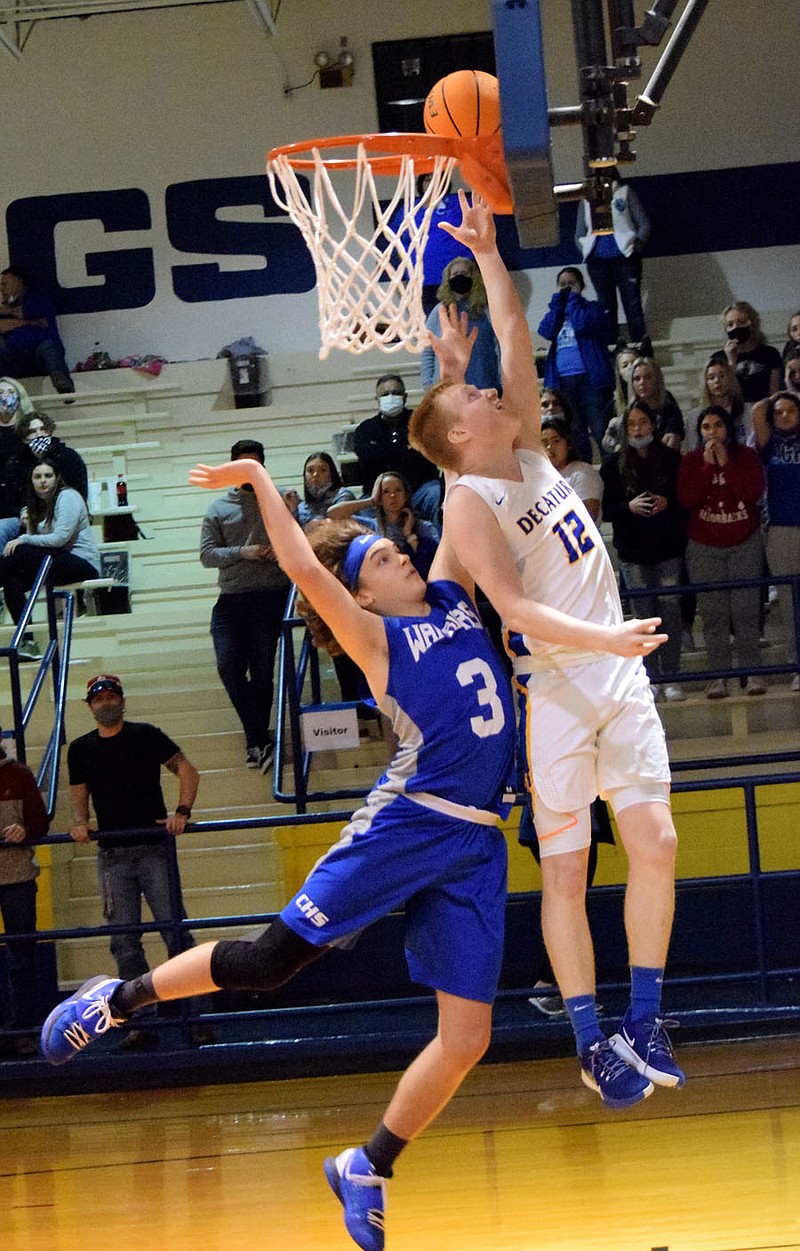 Westside Eagle Observer/MIKE ECKELS Bulldog Bryson Funk (12) gets serious air time as he goes for a layup while Hutson Adams (Warriors 3) follows during the Decatur-Cotter varsity basketball contest at Peterson Gym in Decatur Friday night. Funk made his shot for two of his 14 total points as the Bulldogs defeated the Warriors in overtime 53-45.

DECATUR -- Peterson Gym erupted in thunderous ovation as the Decatur varsity boys broke its five-game losing streak with an overtime victory over the Cotter Warriors in a conference showdown Friday night. The outcome of the game hinged on the final seconds of the four-minute overtime.

The contest was very evenly matched with three of the four quarters ending in a tie in the final 30 seconds.

The first three minutes of the first quarter, the game remained scoreless with neither team able to get the ball through the net. At the 4:44 mark, Kevin Garcia put up a jumper for the first field goal of the contest and the early lead for the Bulldogs. Garcia added another field goal to give the Bulldogs a 4-0 lead at the 2:30 mark. A layup by Hayden Hutson with a little over a minute left in the quarter put the Warriors on the scoreboard. Enrique Rubi added a layup for another two points for the Bulldogs. Up 6-4 with two seconds left, Cotter put up a jumper that hit its mark as time ran out and the game was tied six all.

As the second quarter was about to get underway, two banks of lights shut down, leaving the north side of the court in darkness. The game was delayed for 10 minutes while Doug Holly, maintenance and transportation supervisor, worked to fix the problems. One bank of lights over the court worked while the second one kept tripping the breakers. Coaches and officials decided that there was enough light to continue the contest.

Decatur went on a seven-point run during the first 90 seconds of the second quarter and, by the halfway point, led Cotter 17-13. But a short run by the Warriors tied the contest at 19 going into the halftime break.

A minute into the final eight minutes, two short plays by the Warriors cut the Bulldog lead to two. Decatur picked up the pace and extended its lead back to seven with three minutes left, but the Warriors went on a run and, at the 1:36 mark, tied the game at 37. The Bulldogs and the Warriors traded field goals in the final 30 seconds and the fourth quarter ended with yet another tie, 39 all, sending the contest into a four-minute overtime.

The tipoff went to Cotter. The Warriors took the ball down and within 30 seconds had built a five-point lead on two consecutive short plays. A series of fouls by the Warriors gave the Bulldogs back the lead.

With less than 30 seconds left in overtime and the Warriors down by three, Decatur was fouled, sending the Cotter coach off the bench to question the officials' call. As things began to heat up, officials called a pair of back-to-back technicals on the Cotter coach and he was ejected from the contest. This sent team cocaptain Bryson Funk to the line for four free throws. Funk hit two of the four, which extended Decatur's lead to five. With seven seconds left to play, Christian Ramirez was fouled, giving him a chance to put the game away for the Bulldogs. He hit both shots and the Decatur Bulldogs took the conference win, 52-45, over the Cotter Warriors.

Leading the way in the Decatur Bulldog victory were Bryson Funk and Kevin Garcia with 14 points each, followed by Christian Ramirez with 10 points. Other Bulldogs contributing to the victory included Enrique Rubi with six, Trevor Girdner with five and Deegan Brooks with four.

For the Cotter Warriors, two players were in double figures for the night. Hayden Hutson led the way with 20 points, followed by teammate Hutson Adams with 15. Rounding out the Warrior scoring efforts were Colton Jones with five, Logan Principato, Jeffery Hays and Justin Martian, each with two points. 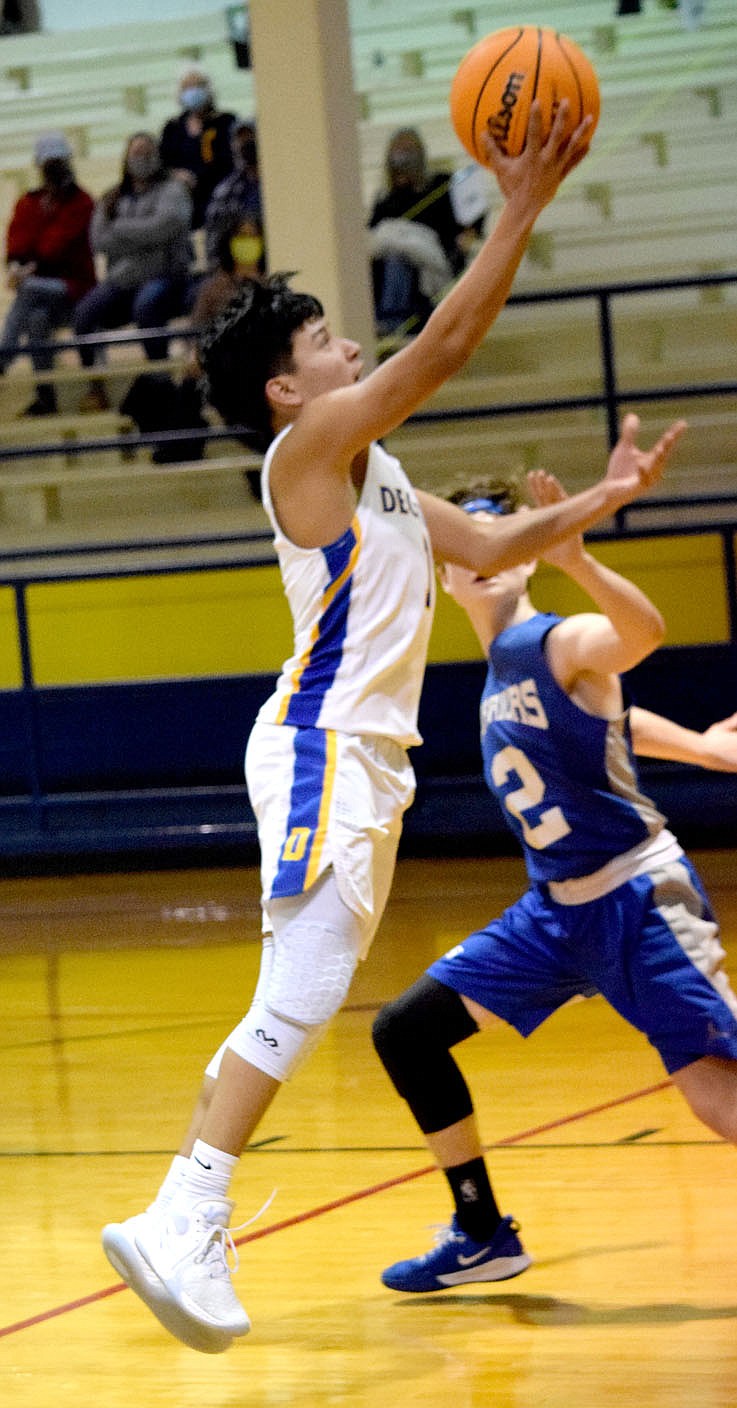 Westside Eagle Observer/MIKE ECKELS Enrique Rubi (left) goes in for a layup as Hutson Adams (Warrior 3) tries for a block during the Decatur-Cotter varsity matchup at Peterson Gym Friday night. The Bulldogs defeated the Warriors in overtime 53-45 for the first conference win of 2021. 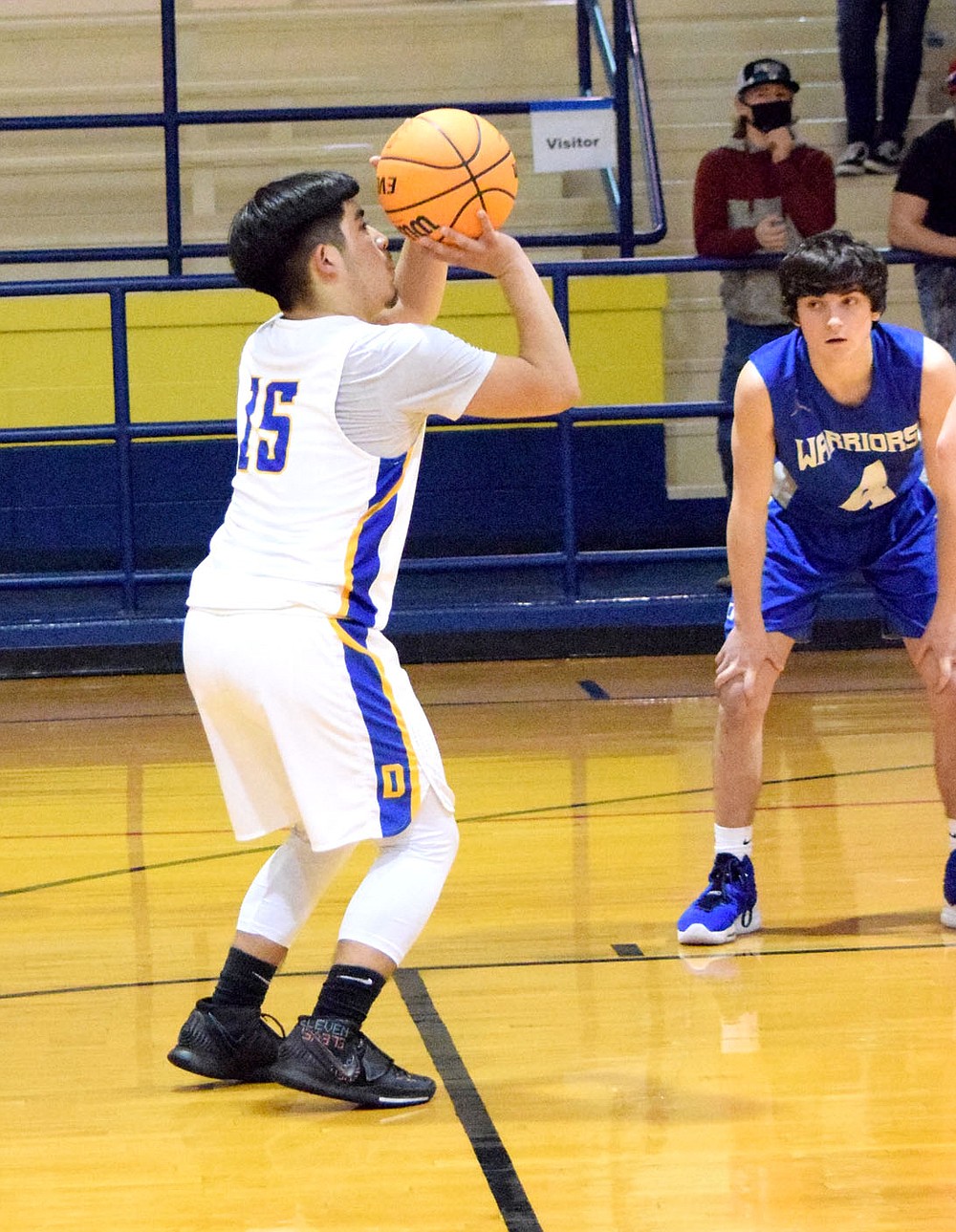 Westside Eagle Observer/MIKE ECKELS During the final minute of overtime in the Friday night Decatur-Cotter conference showdown in Decatur, Christian Ramirez (15) puts up a free throw which eventually hit its mark for two. Ramirez' shot contributed to the Bulldogs 53-45 win over the Warriors. 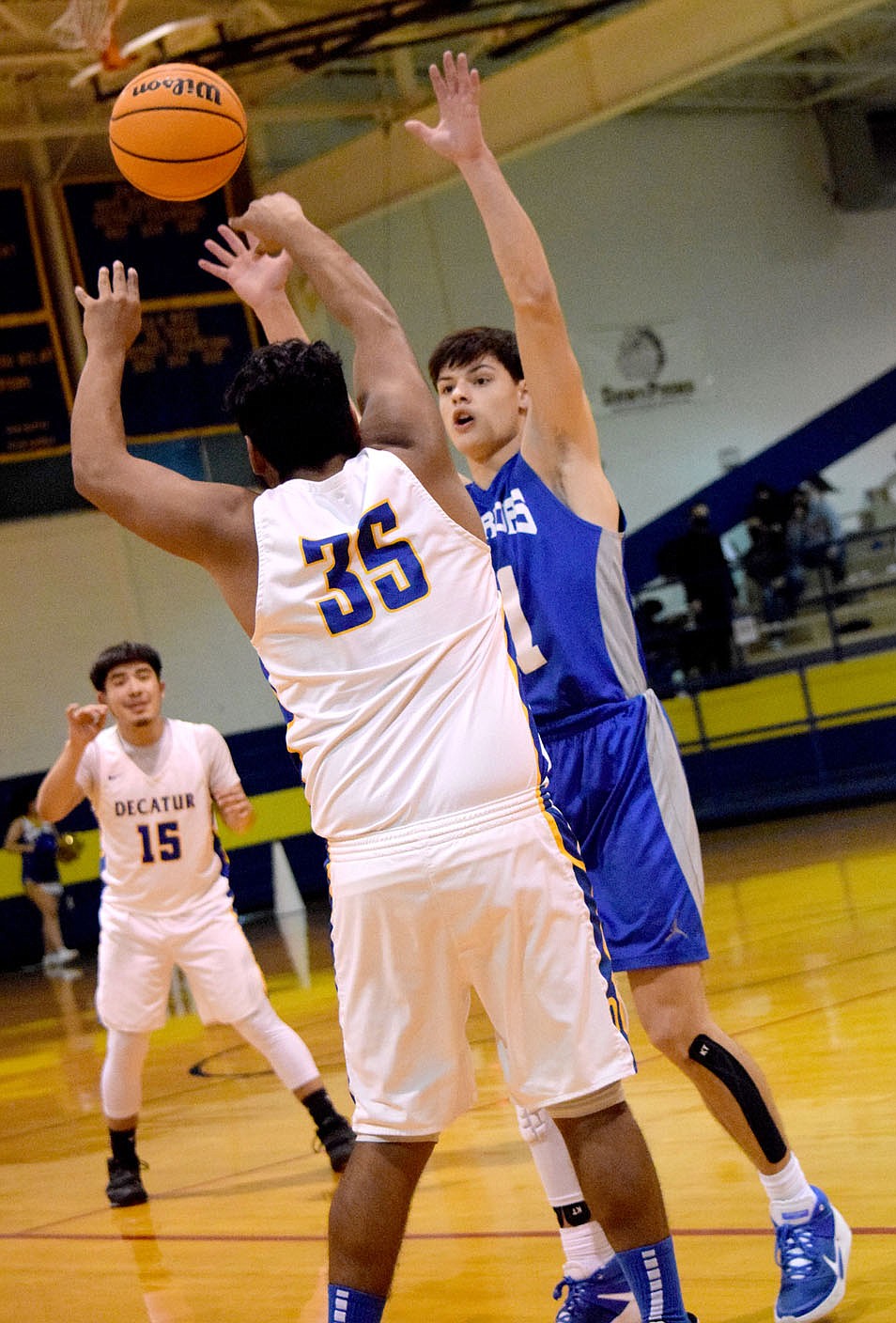 Westside Eagle Observer/MIKE ECKELS With his way to the basket blocked by Warrior Hayden Hutson (11), Carlos Hernandez (Decatur 35) decides to pass to Christian Ramirez (Decatur 15) during the fourth quarter of the Decatur-Cotter conference showdown in Decatur Friday night.