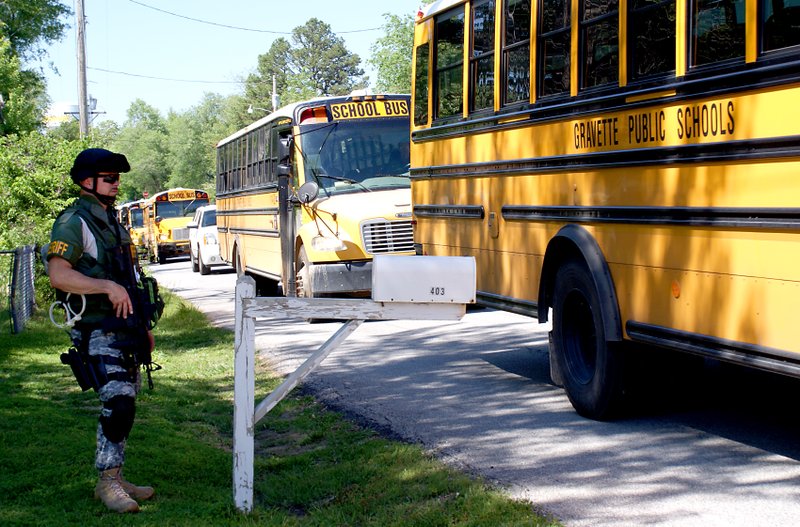 A SWAT Team member from the Benton County Sheriff's Office stands guard as school buses go by on Sixth Street S.E. to pick up children from the middle school and elementary school. Gravette schools were on lockdown following a shooting two blocks to the west on Dallas Street.

Update: Deputy Keshia Guyll, spokeswoman for the Benton County Sheriff's Office, said the man who was shot had actually stolen a gun and accidentally shot himself trying to hide the gun. He then concocted a story about a home invasion to try to cover up the incident, Guyll said.

Anthony Oliver, 25, faces felony charges of communicating a false alarm, residential burglary, theft of property and filing a false police report, all felonies, according to the Benton County Jail website.

Gravette police, assisted by Benton County Sheriff's Office and other law enforcement agencies are looking for a man who apparently shot someone in the leg in the area of the 300 S.E. block of Dallas Street in Gravette at about 2 p.m. Tuesday.

Deputy Keshia Guyll, spokeswoman for the Benton County Sheriff's Office, said a man was shot in the leg during an apparent burglary attempt. The shooter was described as a young man with scraggly blond hair wearing a black shirt and grey shorts. Police have not released the name or condition of the person who was shot.

As a safety precaution, the Gravette schools, located about two blocks to the east, were put on lock down, but let out Tuesday afternoon. The Benton County SWAT Team also responded. Police made sure students were safe when school let out, standing guard and even escorting some students all the way home. 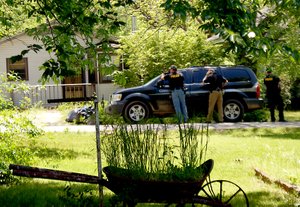 Photo by Dodie Evans
Deputies and officers responded to a reported shooting Tuesday in Gravette.

Correction: A previous version of this story misspelled Keshia Guyll's first name. The error has been corrected.