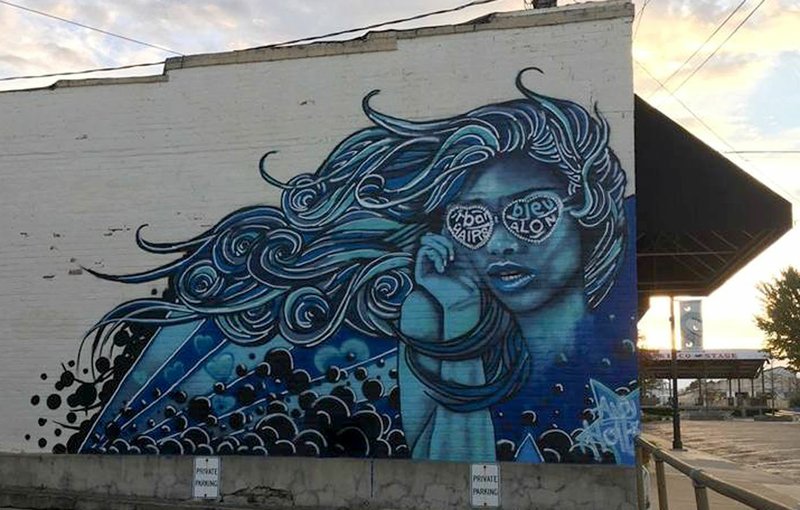 Photo by Arletta Wallace This mural, &quot;Bleu Girl&quot;, painted on the side of the Urban Bleu Hair Salon building in historic downtown Rogers, was created by Gravette artists Andy and Holly Wallace. The mural, completed in just under 12 hours on Oct. 9, was created to fulfill the salon owner&#8217;s specific vision. The Wallaces hope to see more wall murals coming soon to northwest Arkansas.

GRAVETTE — Gravette artists Andy and Holly Wallace were recently commissioned to complete a wall mural on the side of a business building in historic downtown Rogers. The couple's art work, called "Bleu Girl" was created for the Urban Bleu Hair Salon at 113 W. Elm Street. They completed the mural project in a little less than 12 hours on Sunday, Oct. 9. Andy also made a video of the mural process and currently has just under 1,000 views.

Andy and Holly are encouraged about the art installations being done in the downtown Fort Smith area and hope to see more of these coming to northwest Arkansas. Andy had done one mural in Springdale years ago but none since. He and Holly are both practicing Arkansas state licensed tattoo artists and plan to do their mural painting on the side.

Andy's mother, Arletta Wallace of Gravette, said she was a witness to the "Bleu Girl" mural development and she was very proud of the two young artists. The art behind this mural was extensively researched, Arletta said, and the couple were very dedicated to creating this customer's specific "vision."

"As far as actually placing this vision on the 'canvas,' Holly is methodical and focused. She takes time with her application, ensuring every shadow and highlight is perfect. Andy, on the other hand, is quick and effective. He sees the images in his head and attacks the canvas with creative frenzy. Given, these are two very different methods of creative application, but together they are artistic genius. I can appreciate the manner in which they collaborate and I hope there are many more of these murals throughout northwest Arkansas for us to enjoy!"