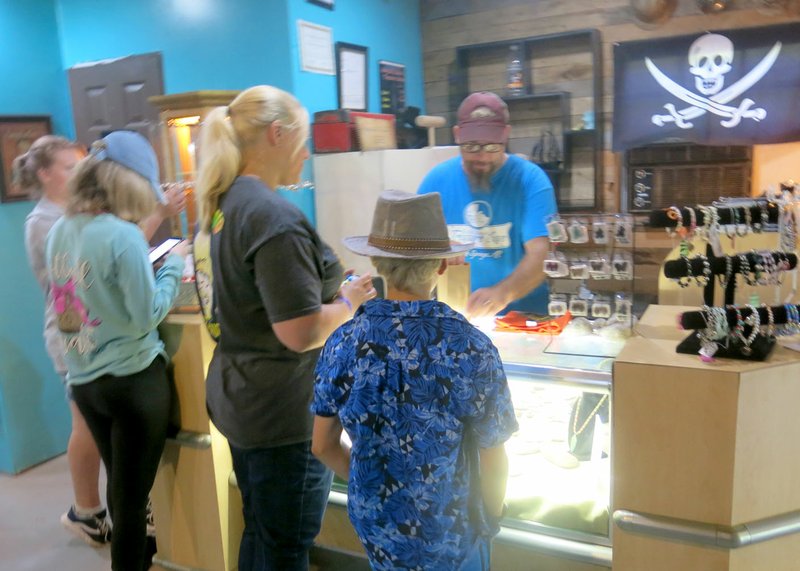 Photo by Susan Holland Paul Linscott, owner of the Old Spanish Treasure Cave with his wife Tracy, assists shoppers in the gift shop at the cave. Students from Arkansas Connections Academy and their families enjoyed a field trip to the cave to open their school year and several purchased souvenirs from the rock shop as mementoes of the occasion.

SULPHUR SPRINGS -- A group of more than 40 students from Arkansas Connections Academy, a virtual school for students from across the state, opened their school year with a trip to the Old Spanish Treasure Cave Friday, Sept. 14. Students and family members gathered at the cave where they heard a brief talk from Paul Linscott, owner of the cave, along with his wife Tracy, outlining the cave rules.

Linscott cautioned the students not to touch anything inside the cave, explaining that it might upset the cave's delicate ecological balance. He asked the visitors to "take nothing but photos, leave nothing but footprints and kill nothing but time" inside the cave. Then the crowd broke up into two groups for tours of the cave.

Linscott conducted one of the tours, while tour guide Hannah Holt escorted the second group, informing visitors about the history and geology of the cave. They were able to visit the "council room" where early explorers likely camped and see a number of interesting formations, including one that has been named "the Titanic" because of its resemblance to a ship's hull. Other intriguing sights include rails that have been uncovered, which carried the ore carts when George W. Dunbar, owner of the cave in the 1890s, and fellow treasure seekers were excavating in the cave, and the natural chimney, which allowed smoke to escape and was reportedly the means by which the original Spanish conquistadors who buried the treasure were discovered and killed by marauding Indians.

The old log cabin, which now serves as the cave's mini-museum and gift shop, was built by Todd Setser around 1860 and housed most of the treasure hunters during Dunbar's era. Dunbar, however, convinced that they were about to find the treasure, started sleeping in the cave, developed pneumonia from breathing the mine dust and fumes from the oil lamps of the day and died.

Online education has become an option for families in search of more flexibility. A brick and mortar school setting may not work for them or they are simply interested in a different education option. One parent who made the trip to Gravette admitted that she had enrolled her student in online instruction because her son was being bullied in his traditional classroom.

Arkansas Connections Academy is a free virtual public school for students in kindergarten through 12th grade. It operates statewide and serves students from all over Arkansas. It is just like a traditional brick and mortar school. The only difference is that the students attend from home or wherever they are accessing the school via the Internet. Students on the cave tour included some from the nearby towns of Rogers and Siloam Springs and others from as far away as Quitman and Little Rock.

The setting at Arkansas Connections Academy is a teacher-directed environment with real, live, local, certified teachers who put together lesson plans, deliver instruction and assign grades. The school uses the highest quality curriculum and students receive textbooks and all other learning materials (including science kits and PE equipment such as jump ropes) at no cost.

Each student is given his or her own lesson plan. At the beginning of the year, they are tested and given their curriculum based on their test results. This allows students to be taught to their own needs and abilities. A student who excels in math can be doing eighth-grade work but, if they struggle in another subject, they may be on a sixth-grade level in it.

Students can participate in clubs and sports, write for the student newspaper and go on field trips just as they would in a traditional setting. Since it is a public school, the same requirements exist as far as immunizations required and vacation days and the students receive a diploma upon graduation.

This is very different from homeschooling. Rather, it is a home-based learning environment. At Arkansas Connections Academy, the parents are not teachers; they are learning coaches. They do not purchase the curriculum and come up with lesson plans. All that is done by the teachers at the school.