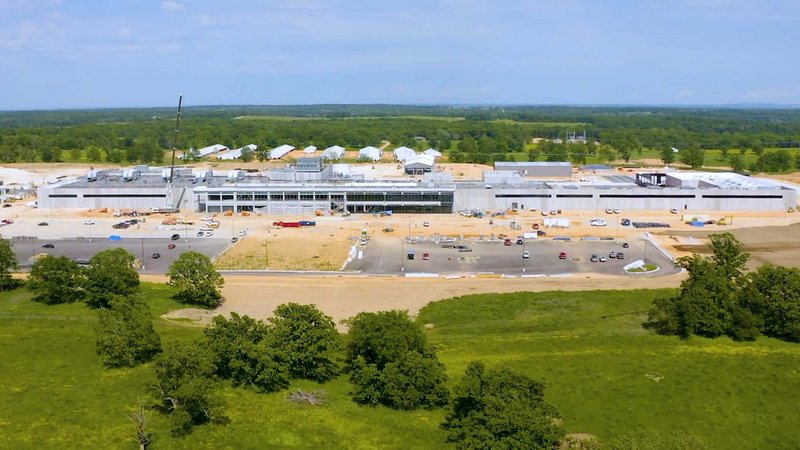 On Tuesday, local officials and members of the media joined company executives for a tour of the 315,000-square-foot plant, located on an 870-acre piece of land between Gentry and Decatur along Arkansas Highway 59.

The Siloam Springs-based company announced plans for the new facility in October 2017 and a dedication ceremony took place in June 2018.

When it opens, the facility will harvest live chickens from around 300 independent family farmers to produce fresh and frozen chicken products, according to Donny Epp, senior director of communications for the company. It will replace the current processing facility in Decatur.

"This will be the best top-end plant that I've ever seen," said Russell Tooley, chief administrative officer for Simmons Foods. "It's world class. It's not just good for western Benton County, not just good for Arkansas. I think it will really set the tone in the industry for what 'good' looks like."

The processing plant is expected to create 1,500 jobs, Epp said. The 800 employees who currently work at Simmons' Decatur plant will transition to the new facility when it opens, and it is expected to reach a capacity of 2,300 jobs in the next three years, he said.

The new jobs will have an estimated annual payroll impact of $86 million, Epp said. On average, employees will earn $16 an hour with pay ranging from $13 to $25 an hour, he said.

The facility was created with Simmons' team members in mind, according to Jeff Norman, senior director of operations.

"We want it to be a good place for our team members to come and be proud to go to work," he said.

The facility features a 17,000-square-foot break room filled with natural light from a two-story glass curtain, he said. When it's completed, the area will feel more like a coffee shop than an industrial break room. Inside the plant, employees will work in a controlled climate of 72 degrees and lines will be slower, he said.

To fill the 1,500 jobs, Simmons has opened a hiring center in Siloam Springs where prospective employees can go through the hiring process in as little as 40 minutes and walk out with a job, Tooley said.

The processing facility will also increase the need for live chickens by 28 percent, which will increase the number of chicken houses, Epp said. Most of the farm growth will take place in the tri-state area -- Arkansas, Oklahoma and Missouri, Norman said.

"About 50 percent of new construction is happening with existing farmers, so we're growing with existing partners in that area," Epp said. "They are very excited about the opportunity to grow their family-owned businesses along with us."

Even though it won't open for several months, the facility already has an economic impact from the approximately 50 contractors and about 500 employees who are working on the construction, Norman said.

Benton County Judge Barry Moehring said the facility will have a "huge impact" on the county's economy.

"On the west side (of Benton County) this will really be a catalyst for economic development," he said. "It's going to bring additional jobs -- good jobs, high paying jobs -- which is going to impact the economy here and it has a multiplier effect that spreads across retail, across housing, across the school districts, so this is nothing but an upside for Western Benton County, it's a great deal."

The annual impact of utility services to Gentry and Decatur is expected to be $2 million to each town, a fact sheet from Simmons states.

The city of Decatur is providing wastewater services to the plant, according to Decatur Mayor Bob Tharp. Decatur's wastewater plant was recently remodeled with state-of-the-art technology and is ready to provide services to the facility, he said.

The city will be keeping a close eye on numbers as it loses the real estate taxes and water sales from the current plant, but the upside is the increase in wastewater use, he said.

"On Decatur's side, from an economic standpoint, we're ready to go," he said.

The city of Gentry is working on a partnership with Simmons to provide water services to the facility, said Gentry Mayor Kevin Johnston.

The city will be upgrading its water lines and tower whether or not it partners with Simmons, so city officials are looking for the most efficient way to provide services to all their customers, he said.

Johnston said his city is already getting a taste of economic impact, including a movement toward an increase in housing.

"It's a blessing that we're not getting the 1,500 jobs all at once," Johnston said. "It gives us the opportunity to grow and kind of control some of that growth to produce the amenities on our end that we're going to need to help attract the best employees for Simmons and all the other employers as well."