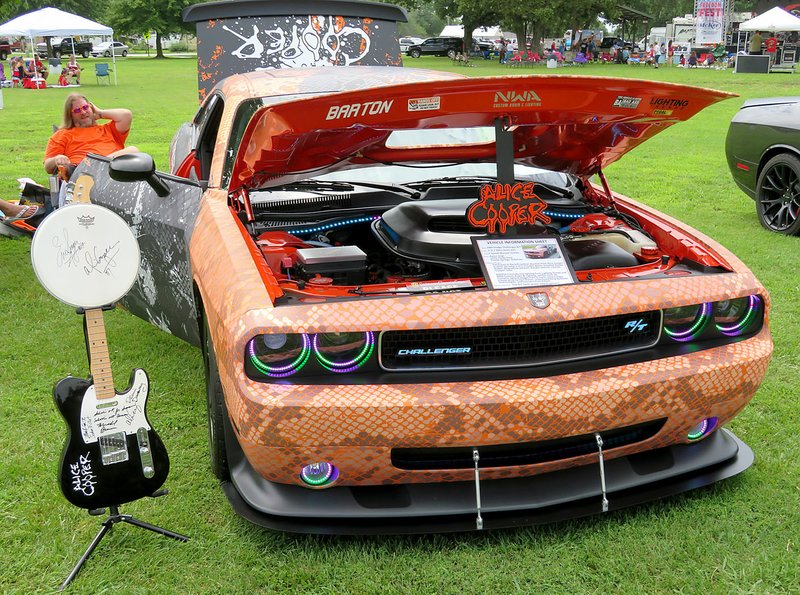 Westside Eagle Observer/RANDY MOLL Cars and trucks of all makes and models were on display at Gentry's annual Freedom Festival on Thursday.

GENTRY -- Once again, the July 4 Freedom Festival in Gentry brought thousands to the city park to celebrate the Independence Day holiday. The crowd continued to grow all day and, by evening, the entire park, as well as surrounding streets and sidewalks, was filled with area residents and many visitors who came out to hear the music and watch one of the best fireworks displays in the region.

The anthem was again sung at dusk, just prior to the spectacular fireworks display over the park. And the fireworks display, set off by members of the Gentry Volunteer Fire Department, continued for nearly 20 minutes as those in attendance cheered the loud booms and the display of brilliant colors in the night sky.

The day included pageants for the selection of 2019 Little Miss Gentry, Little Mister Gentry and Miss Gentry. The winners for 2019 included Carson Holland, 5, daughter of Chris and Tiffany Holland of Highfill; Xander Frazier, 5, whose guardian is Michelle Frazier; and Falyn Cordeiro, 17, daughter of Brandy and Mike Cordeiro.

During the day, there were performances by Marshall Mitchell, cowboy singer; the Kaylin Cripps Band; Mark Shields and the Swade Diablos; the Dawn Cate Band; Healey & Cardwell; and the Ozark Mountain Daredevils.

Classic and colorful cars and trucks (even a few bicycles) lined the sidewalks on the north side of the park as exhibitors displayed their rides and had them judged in the annual car show. (Watch for the winners in a future issue of the Eagle Observer.)

Children hammered in nails and built toolboxes in a Kid's Carpentry Shop sponsored by Meeks Lumber and Hardware, enjoyed inflatable rides, camel rides, and the Wild Wilderness Safari petting zoo. Vendors offered a wide variety of food, drinks, goodies, as well as information, to those celebrating the day in the park.

The day's events were sponsored by the Gentry Chamber of Commerce and area businesses.