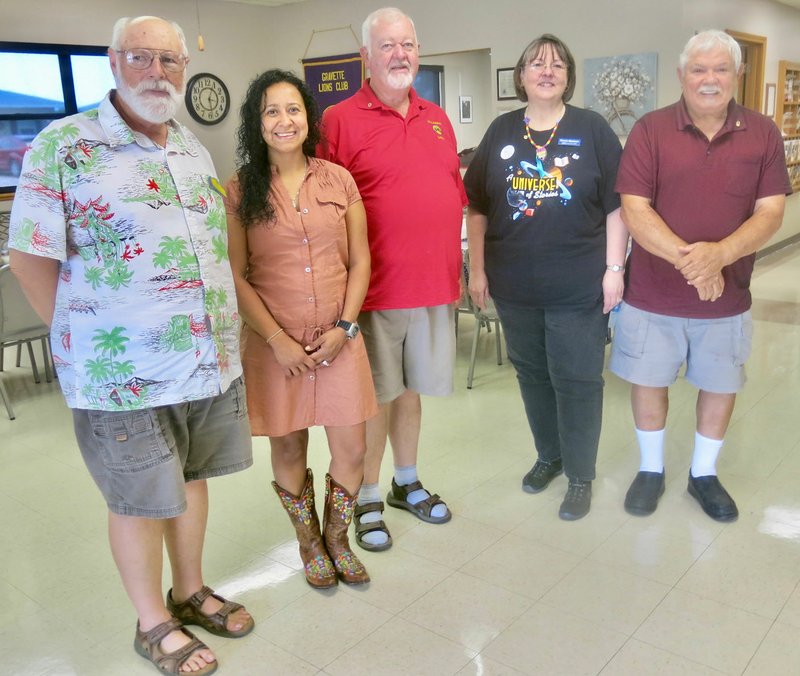 The installation was a part of the club's annual awards ceremony and anniversary celebration. President Al Blair presented an award pin and certificate to Karen Benson, recognizing her as Lion of the Year for the 2018-2019 year. Her certificate reads, "Presented to Karen Benson in recognition of service and leadership to the club and the community during the 2018-2019 Lions year."

Benson, who is the supervisor of the Gravette Public Library, has served as vice president of the club this year. The local Lions Club and the library cosponsored a Helen Keller Day celebration in June.

New tail twister Karen Benson conducted an interesting tail twister in which she asked each member present to tell "Why I joined Lions Club." Answers included just being asked by a current member, having a parent or other family member who was a satisfied Lion and looking for opportunities to be of service and give back to the community.

President Blair announced that he has secured Connie Fetters, a member of the Bella Vista Questers Chapter, as guest speaker for the July 16 meeting. Fetters will talk about the Northwest Arkansas Oral History Project being conducted in collaboration with the Pryor Center at the University of Arkansas. The Questers are seeking persons to be interviewed for the project.

In other business, members discussed the deteriorating condition of the mural at the concrete plant and plans to replace it, and the Live and Learn program/health fair scheduled Saturday, Nov. 9, at the Civic Center. Committee members were signed up to handle various aspects of the Live and Learn program. Plans were made to set up a booth to display Lions Club literature and make souvenir buttons at Gravette Day, Aug. 10. Various fundraisers were discussed, including selling nuts, developing a 2020 calendar featuring community photos and holding a car show. Subway discount cards were distributed to members, who will be selling them in the area.

The announcement was made that the usual first Tuesday meeting in August will be held one week early, on Tuesday, July 30, so that local Lions Club members can attend a meeting with the international director in Little Rock on Aug. 6.

Members and guests enjoyed cake and ice cream following the meeting, in celebration of their sixth anniversary as a club.

The next regular meeting of the club will be held Tuesday, July 16, at 12:15 p.m. at the Billy V. Hall Senior Activity and Wellness Center. All interested persons and guests are invited to attend.