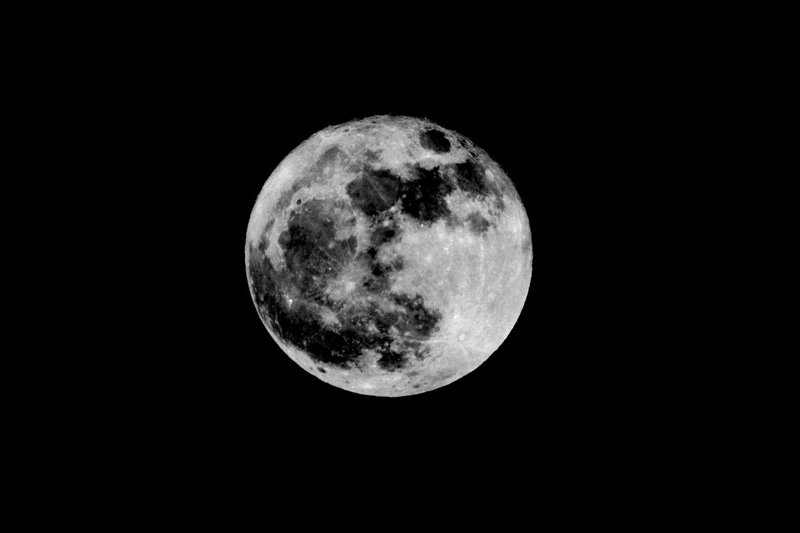 David Cater/Star-Gazing Our moon shining brightly in the summer sky.

July will be a veritable parade of the planets! Setting in the west just after sunset, Venus and Mercury can be easily seen, even with the naked eye. Venus will be easy; Mercury, harder.

Venus will be quite bright, its white, opaque atmosphere making it a great reflector of the Sun's light. Even a small telescope will often reveal its phases -- it looks like a cue ball but with a slice taken out of it. Mercury will be lower down in the twilight sky, and to the right of Venus. While it will be within naked-eye brightness, it will be quite low down over the western horizon, and it will look star-like with the naked eye.

If you look south after about 9 p.m., you will easily see giant Jupiter resting about on the meridian. It is nearly as bright as it can be seen in July, but its brightness will fade a bit by the end of July because we on Earth traverse a smaller orbit around the Sun and we pull away from this beautiful gas giant. This will make Jupiter appear dimmer from our point of view. There are a lot of wonderful, high-resolution photos of Jupiter's atmosphere out on the internet because of recent orbital images made by NASA satellites. Many of them remind me of modern art or an intensely colored marble cake. A telescope of about 4 inches in diameter will show the major bands of clouds in the atmosphere and the view only gets better with larger aperture. If you live where an amateur astronomy club meets, drop by and get a look at Jupiter. Amateurs love to show you their gear and would like it very much if they could show you Jupiter some July night.

Deeper into the night, say around 11 p.m., one can see the ringed planet Saturn. Saturn will be dimmer than Jupiter and it will be a bit lower in the sky but still easily visible above the southern horizon. It will have a slight golden or yellow color to the naked eye. A subtle sign that you have visually found Saturn is that it will not twinkle. This is true of all the planets, so this is one way to identify Jupiter, too.

July, through August and September, is the period when Mars will be closer to Earth than it has been for the last 15 years! This means that Mars will have a larger apparent size than it has had in 15 years and this will make it excellent for those who view it from Earth.

I know I will be photographing it with both a 10-inch and a 6-inch telescope. If I get images with the 10-inch, these should show the best detail but, for technical reasons having to do with how this telescope is constructed, the images made with the 6-inch may be better. The 6-inch is specially constructed to make good planetary images if our atmosphere cooperates. If I get anything good enough to show some detail, I will send it in with my column. Again, if you can get an amateur with a good telescope to show you Mars this summer, it will be quite rewarding, I think. And, Mars will not be this well seen for several more years. See it at its best while you can.

If you do get to see Mars through a telescope, look for two details I think you will find interesting. Mars has polar caps made of frozen carbon dioxide ice and water ice. Mars is tilted a bit with respect to Earth so probably only one cap may be seen. The cap will be white since, like snow on Earth, these ices reflect light easily. Also, look for dark, shadow-like features on Mars' surface. These features have somewhat indistinct outlines so you will not be looking at markings with sharp boundaries. The soil on Mars has different compositions and these compositions reflect sunlight to varying degrees. This variance in reflectivity accounts for what sometimes looks like separate continents -- but are not.

Since one is looking in a southerly direction to find Mars, staying up even later will reveal the Milky Way if you are at a dark site. Two constellations are especially compelling -- Sagittarius and Scorpio. I will have more to say about these constellations later that, in turn, look like the outline of a teapot and a genuine Scorpion in the sky.

I have also included a couple of pictures of the moon in this week's column.

The night bugs are out, but we do have many clear nights in summer. Get out of the house and look for the parade of the planets!

David Cater is a former faculty member of JBU. Email him at starbug352@yahoo.com. Opinions expressed are those of the author.

Print Headline: 'Parade of Planets' to be visible in night sky throughout July