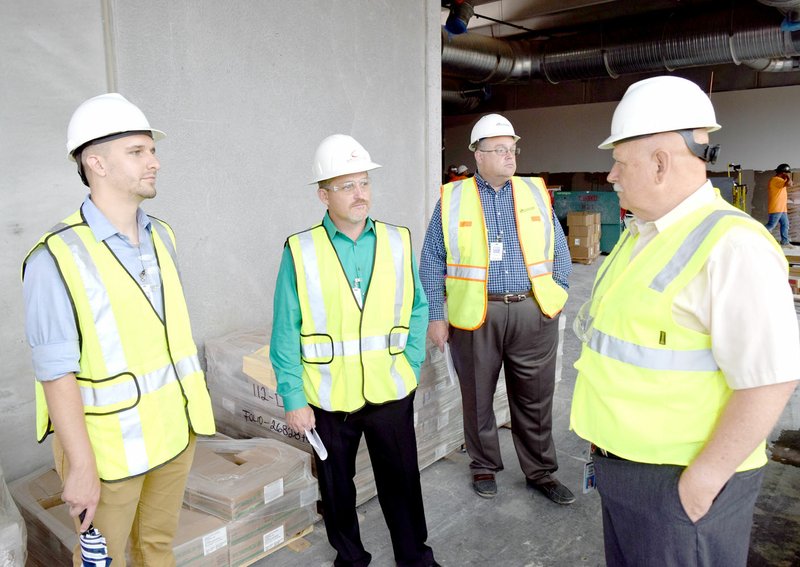 Westside Eagle Observer/MIKE ECKELS Decatur Mayor Bob Tharp (right) talks to Donny Epps (left) and Gentry Mayor Kevin Johnson about the new Simmons plant, while Jeff Thacker (background) watches work going on outside the window. The four were part of the July 2 tour of the new poultry plant currently under construction on Arkansas Highway 59 between Gentry and Decatur.

GENTRY -- A loud clap of thunder reverberated throughout the building as community leaders and members of the press toured the new 315,000-square-foot Simmons poultry processing facility between Gentry and Decatur on July 2.

A severe thunderstorm rolled through the area as Jeff Norman, senior director of operations, guided the 15-member tour through what will be one of the largest and most modern poultry processing facilities in the world.

Russell Tooley, Simmons chief administrative officer, has worked in the poultry industry for 35 years. He has traveled around the world observing the different operations of other poultry producers.

"I've been blessed to see other operations in other countries around the world, including China, Latin America and the United States," Tooley said. "This is by far a world-class facility that is not only best for western Benton County and the state of Arkansas but also sets the tone in the industry for what the future will look like."

In January 2018, Simmons broke ground on its new $300 million state-of-the-art poultry processing plant. The company purchased more than 870 acres next to Y City Road between Gentry and Decatur along Arkansas Highway 59. The facility itself is being built in the center of that 870 acres, providing a half mile of landscaping as a buffer zone around the structure. When the landscaping is complete, the plant will be nestled behind a set of berms, with trees added for more screening.

After a short safety briefing in the plant's temporary office, the dignitaries boarded a bus for an hour-long tour of the new facility. A short drive around the back side of the building revealed the outgoing loading dock, water cooling tower and the live haul unloading area.

Trucks will come into the facility from more 300 area growers. The trucks will be unloaded and the birds sent through a dock door into the dressing area.

The visit to this area was cut short due to an intense thunderstorm rolling through the area. So, the tour made its way to the front of the building and the main entrance.

With the sounds of air tools, fans and the beep of moving scissor-lifts, Norman took the group to the dressing area where the birds will be de-feathered and gutted before going into the next stage, which is the USDA inspection area.

In this area, the United States Department of Agriculture inspects each bird for quality before releasing it to the chilling room.

In the chilling room, cold water from the cooling tower takes the dressed chicken's temperature from around 100 degrees to 34 degrees in a little over 30 seconds. From there, the birds go into the secondary processing area. Here the bird's breasts, legs, thighs and wings are separated and packaged. The finished product is boxed up and sent to the shipping department, where it will be put on trucks and shipped around the world.

The entire plant is kept at a constant 72 degrees to maintain the quality of the product and comfort of its employees.

When the plant is in full production by the end of January 2020, it will have the capacity of processing 420 chickens per minute.

One of the key factors in the design of the new plant is the employee. Every aspect of the design in the nearly quarter-mile-long facility was geared to boost production by making the environment user-friendly.

Simmons' philosophy is that, if you keep your employees satisfied, they will want to stay, thus lowering the employee turnover rate.

With this idea in mind, the design team for Simmons honed in on a break-room concept like no other. Looking at the rendering, the design resembles a coffee shop in a large mall food court.

The food will be served up cafeteria style. Employees will be able to come into the break-room, make their food and drink selections and pay through a kiosk system. No vending machines will be used in the facility, allowing for a much cleaner environment.

But Simmons wanted to make other options available to employees, as well, so it is working with several local vendors to bring in food trucks for employees.

Simmons' attention to the well-being of its employees is something Decatur Mayor Bob Tharp sees as beneficial to Decatur's as well as the county's future growth.

"I am very pleased to see how the new plant is progressing, and the layout of the plant is obviously designed to be extremely user-friendly for their future employees," said Tharp. "Breakroom, plant entrance, plant parking and a central aisleway that will enable employees to move within the processing area is really a huge employee benefit."

In addition to the spacious break room, the plant will have several outdoor eating areas. All this is to make the employees' break and mealtime more relaxing.

At present, the new facility will employ 1,500 area workers. The 800 workers currently employed at the Decatur plant will move into the new facility, with 700 jobs added from the outside workforce.

The Simmons Hiring Center in Siloam Springs is interviewing what Simmons calls "underemployed workers" to fill these openings. According to Simmons, an applicant comes into an interview and 30 seconds later is hired.

The new workers start out with the company at between $13-$25 an hour depending on the position. Most of Simmons workforce are salaried, particularly supervisory and management positions. The company estimates that its payroll will be around $86 million annually.

Barry Moehring, Benton County judge, looks at the Simmons facility as a great equalizer for the western part of this county.

"When you think back 10, 15, 20 years ago in western Benton County, you think about the kind of progress then versus now, this is an amazing development," said Moehring. "When thinking about some of the school districts on the west side, think about measures like free introduced lunch that are pretty high compared to the rest of the county. A facility like this helps to equalize that. Someday we will have more jobs, more income, more money going to the school districts, going to the families -- even measures like that will improve tremendously from a facility like this."

Gentry Mayor Kevin Johnson was another civic leader getting to see the plant closeup.

"We really get to see what Siloam Springs and Decatur have witnessed for several years with Simmons and having Simmons as a community partner," Johnson commented. "Speaking on behalf of Gentry, we really get to see that and to get to be a part of the new evolution of processing and getting to be a partner with Simmons. I'm proud for them, proud for our community and western Benton County. I am looking forward to seeing this project completed."

The city of Gentry will provide the new plant with its water needs, while Decatur will take care of its wastewater. All told, each city will receive roughly $2 million annually, not to mention the economic impact of new housing and commercial development.

Gentry has already experienced growing pains as Simmons partnered with Mayor Johnson and the city to build several new apartment complexes, including one in the south-central part of town. With Simmons moving the Decatur employees which already have roots in western Benton County, Gentry will have a little more time to begin expanding its housing and services for the influx of new families.

"We have been experiencing some growth so far," Johnson stated. "It is really good news to me that we are not going to have 1,500 new jobs come in January. It gives us the ability to grow with it and that is truly a blessing that will allow us to gear up as we hire additional police officers and firefighters.

Tharp, who has toured this facility before, sees a bright future for not only the city of Decatur but the entire region as well.

"This is my second time to tour the facility and the progress is impressive," Tharp concluded. "I believe this facility will be a great benefit to Benton County and Northwest Arkansas and will spark growth for the city of Decatur."