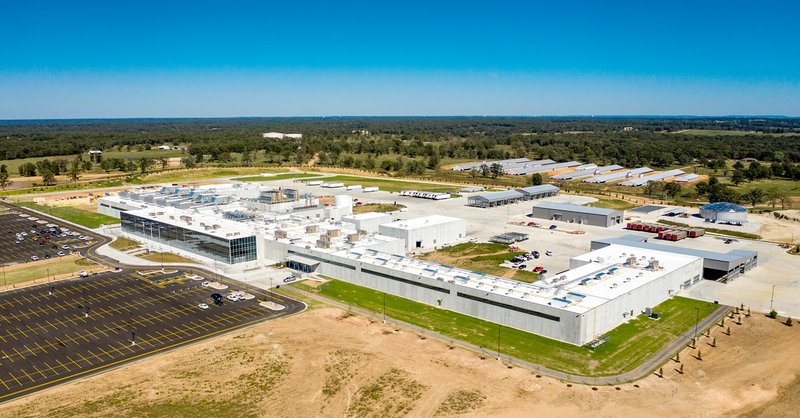 SUBMITTED The drone photo above shows the new Simmons Foods facility located between Gentry and Decatur on Oct. 12. The facility is beginning to ramp up its production as it tests its new equipment and processes to ensure quality and safety. Approximately 900 team members are transitioning to the new facility from Simmons poultry production plant in Decatur. The company expects to increase staffing at the plant to 1,200 team members by January 2020, with the potential to reach up to 2,300 team members in 2022.

DECATUR -- "It's time to grow Decatur!" was the message Mayor Bob Tharp sent to the Decatur City Council during its regular meeting Oct. 14 in the conference room at city hall.

In an interview Oct. 29, Tharp expressed his concerns about the future of Decatur.

"We need to expand our city limits and grow the town," Tharp stated." If we don't, in a few years we will have Centerton, Gravette and Gentry knocking at our doorstep."

In an effort to kickstart the growth process, Tharp unveiled a plan to annex land along Arkansas 102 to the east, Arkansas 59 to Bethlehem Road to the north and the east side of Arkansas 59 to the south, including the newly built Simmons poultry processing plant. A map showing the exact tracts of property included in the annex proposal is available through the Decatur city clerk's office at the city hall.

"The Decatur City Council is considering the passage of an ordinance that would place an opportunity to annex lands that the council has determined are valuable to the growth and protection of the city for a vote on the March 2020 primary ballot," Tharp said.

Property owners in the proposed annex area will get a chance to vote on whether they want to be included in the city of Decatur during the March 2020 general election.

In order to get the proposal on the ballot, the city needs to pass the ordinance by December 2019.

"This ordinance passed its first reading at the October meeting and is scheduled to be reviewed and voted on again at both the upcoming regularly scheduled November and December meetings of the city council," Tharp explained. " If the council approves this ordinance on its second and third readings, the question of approval of the annexation will then be referred to the citizens of Decatur for a vote in March 2020, along with county residents whose property is potentially going to be annexed and those who live on said lands."

Anyone seeking information about the annexation proposal should plan to attend the Nov. 11 council meeting which starts at 6 p.m. at the Decatur City Hall. Per the council rules, the first 30 minutes of the meeting are open for public comment on this or any other citizen concerns. Citizens will be allowed five minutes to voice their concerns to the council.