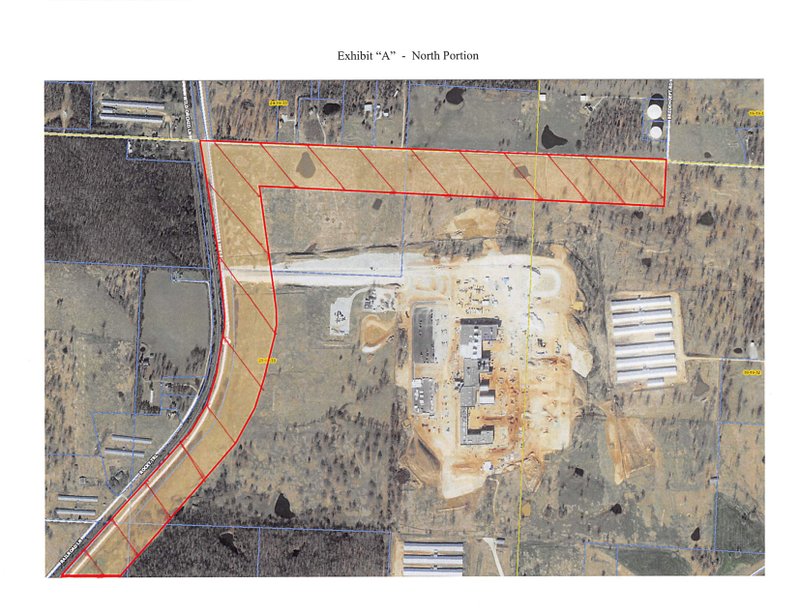 This map, provided by the city of Gentry, shows the northernmost strip of land to be annexed into the city should the ordinance pass and the voters approve in April 2020.

GENTRY -- The city council, at its Monday night meeting, approved the purchase of two police cars, a water department truck, and two backup generators for the city. In addition, a special ordinance was approved on its first reading to annex by ballot certain lands extending north along Arkansas Highway 59 and east along Peterson Road and Y-City Road to protect Gentry's interest against a similar measure taken by the city of Decatur in October.

Gentry's mayor, Kevin Johnston, said the ordinance was brought before the council because a portion of the land Decatur is seeking to annex is inside the Gentry School District and Gentry's water service area and fire district. Gentry's annexation proposal reaches out to property owned by the city and the proposed sites of a Gentry water tower and fire station.

Gentry's action calls for a special election on Tuesday, April 14, 2020, to put the question before the Gentry voters. The ordinance, if passed on three readings and with an emergency clause, will at least give Gentry voters and any voters in the lands to be annexed the opportunity to weigh in on the matter. And, should both Gentry's and Decatur's annexation measures be passed by voters, the results of those elections could still be the determining factor with the city having the highest percentage of voters in favor, prevailing in the annexation issue.

Approved by resolution was the purchase of two patrol cars for the police department, one to replace a vehicle recently damaged in an accident and the other for a 10th officer to be hired in the new year. The resolution authorizes the mayor to execute a purchase agreement with Superior Auto Group "for the purchase of the sedans at a per-vehicle price not to exceed the state procurement bid of $22,243." The resolution also authorizes the mayor to contract with Superior Auto Group or third-party providers for the supplies and labor to equip the cars for police department use "at a reasonable sum." The money for the purchases will be included in the 2020 budget and part of the cost will be offset by the insurance claim on the totaled police car.

The purchase of two Caterpillar model DG80 60-kW standby generators from Riggs Equipment at a price not to exceed $52,000 was approved by council resolution. The generators are needed to provide backup power for two wastewater lift stations.

The council approved an ordinance on three readings, including an emergency clause, to authorize the city to enter into an agreement to issue bonds not to exceed $5,655,000 for park improvement projects and to dedicate 1/2 cent of the voter-approved 7/8 cent increase in the city's sales and use taxes for repayment over a 31 year term. Stephens Inc. is handling the bond issue for the city. The net interest cost to the city is not to exceed 3.1568217 percent.

City plans include relocating softball and baseball fields and building soccer fields on new parkland south of Smith Street, along the railroad, and possibly adding new amenities to the city's park system, including a splash pad.

An ordinance setting a $15 informal plat application fee was passed on three readings. Currently, no fees were charged for the service.

An ordinance was passed on three readings and with an emergency clause attached to set annual fire dues for residents outside the city limits of Gentry but within its fire protection district at $50 "per property, or per residence, if more than one occupied residence is on a property." Current dues were $40. The new dues will go into effect for 2020.

The council again approved a millage resolution setting the property tax rate for the city of Gentry on both real and personal property within the city for 2019 but to be collected in 2020 at 5.0 mills for the General Fund and 0.3 mills for the Fireman's Pension Fund. The rate remains unchanged from last year.

The council passed an ordinance on three readings, with an attached emergency clause, to accept into the city land by petition of Steele Development and Turning Point Fellowship which lies west of Crowder Ave. and south of Arkansas Highway 12. Plans are for the land to be developed into a subdivision known as the Crowder Subdivision.

The final plat of Phase 3 of the Sunset Ridge subdivision (to the south side of Arkansas Highway 12 on the east side of Gentry) was approved by the council. It had passed all necessary requirements with the city's planning and zoning commission. The plat approval was on three readings with a single vote and with an emergency clause attached.

An ordinance granting the replatting of properties owned by Nora Krein, Orest and Nadia Stasiv, and Leon Slikkers in Country Estates was passed by the council on three readings. A similar ordinance was passed on three readings for land belonging to Gaylene Walker and Scott and Amy Mayberry.

Mayor Kevin Johnston presented to the council his proposed budget for 2020, and a working council session was set for 5:30 p.m. on Nov. 13 to begin to review the budget proposal. The place of the meeting will either be in the McKee Community Room at the Gentry Public Library or in the council chambers, across the street from the Library, according to Johnston.