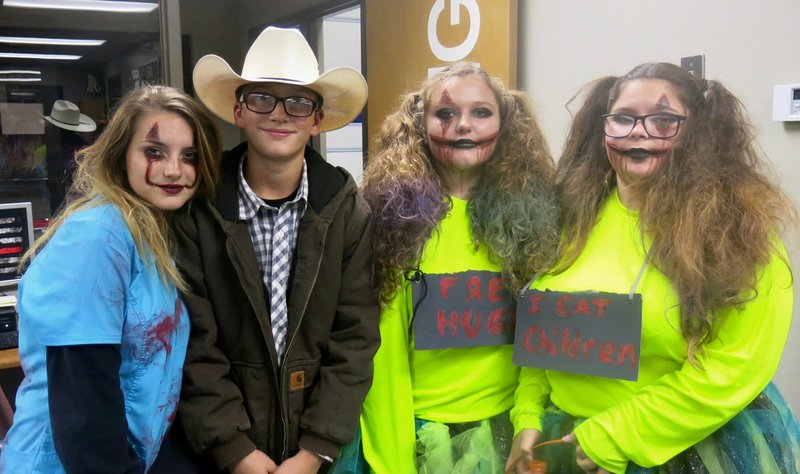 Westside Eagle Observer/SUSAN HOLLAND Four teenagers from Maysville, Lexcey Boyle, 17; Garrett Harris, 13; Harlee Harris, 15; and Kayley Andrews, 14, enjoy the trick or treat at the fire station Thursday night, Oct. 31. The event, sponsored by the Gravette Police Department and the Gravette Fire Department, was attended by many youngsters and adults as well as several teens.

GRAVETTE -- The big bays at the Gravette fire station were bustling with activity Thursday evening. Gravette fire and police department personnel hosted their annual trick or treat event for area youngsters. Fire trucks and the ambulance were moved and put on display outside, and space inside was filled with giant inflatables and a maze the children could crawl through.

Many trick or treaters showed up to select from the treasure trove of candy that was offered, and most were in costume as organizers had suggested. They romped around the fire station enjoying the games provided, including Jenga, Connect 4 and a bean bag toss.

With temperatures in the 30s and heavy traffic on some city streets, both young and old agreed the event was a much warmer and safer alternative than trick-or-treating from door to door.