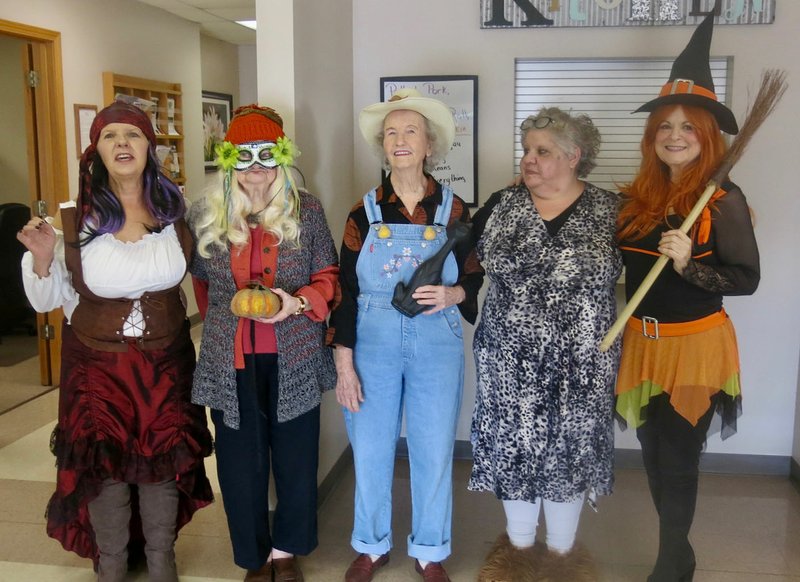 GRAVETTE -- Patrons of the Billy V. Hall Senior Activity and Wellness Center enjoyed a Halloween party at the Center Thursday morning. Guests participated in a number of activities, including games of ring toss (over the top point of a witch's hat), relay race carrying an eyeball in a long wooden spoon, bean-bag toss and Q-tip blow. Winners were treated to prizes that included bags of candy and boxes of Cracker Jacks.

Tables were covered with seasonal tablecloths and each place setting featured candy treats, Halloween napkins and witches' broom favors made from pencils and bags of stick pretzels. Pumpkins painted by patrons on Oct. 23 decorated the piano.

Several guests were in costume and five ladies entered the costume contest. They lined up and were introduced, then everyone wrote their favorites on a small piece of paper. When the votes were counted, Penny Leonard won with her pirate's costume, and Connie Adams with her pumpkin lady costume and Carole Robel with her witch's costume tied for second place. Other entrants were Freida Burnett, wearing farm girl overalls, and Melissa Williams with her cavewoman costume.

Lunch was served at 11:30 with ghoulish goulash, ogre rings, moldy bread and dirt cake on the menu. Several folks returned at 5 p.m. for pizza and a movie night. They enjoyed a variety of pizzas, garden salad and ice cream treats while watching the movie, "Hocus Pocus."