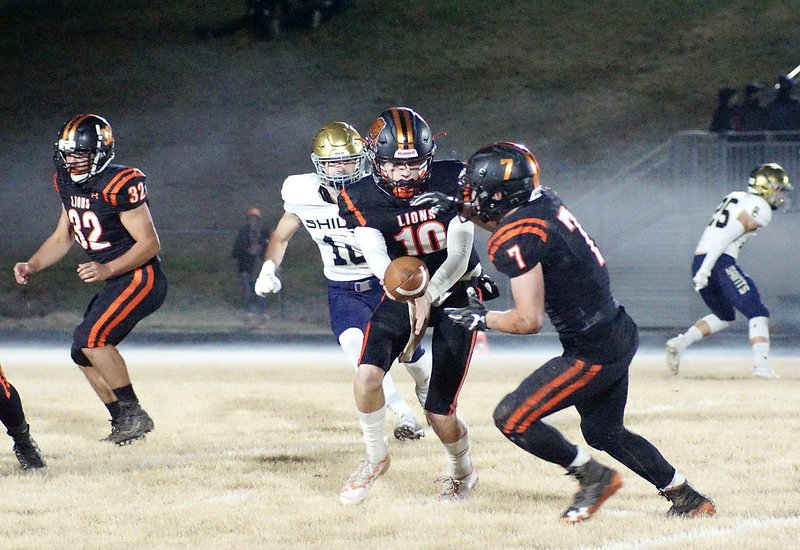 GRAVETTE -- Shiloh Christian receiver Truitt Tollett broke free down the seam and hauled in his fourth touchdown catch of the night as the Saints recorded their ninth unanswered score.

It was a comfortable night for the visitors. Shiloh Christian (9-0, 6-0 1-4A Conference) trailed early, but the Saints dominated after that to crush Gravette 61-6.

Gravette (4-5, 3-3) elected to receive the ball to start the game, and the Lions' offense came out hot, efficiently moving the ball down the field and keeping the Saints on their toes. On the ninth play of the drive, Lions quarterback Cy Hilger found his receiver Josh Dodge wide open, and Dodge coasted into the endzone with the game's first score.

The Lions' celebration was short-lived. A combination of Shiloh's up-tempo offense and relentless defense kept the Lions in the dark for the rest of the game.

A variety of offensive players made an impact for Shiloh Christian, with running backs Cam Wiedemann, Ben Baker and Logan Raben all racking up big yardage, and receivers Luke Hutchinson and Beau Cason hauling in a few passes apiece.

Saints senior quarterback Eli Reece was 20-of-30 passing for 358 yards and four touchdowns, all to Tollett.

"Well, I think a lot of guys on defense stood out," Saints coach Jeff Conaway said. "The play, once again, from Truitt Tollett on offense and Eli (Reece) distributing the ball made for a lot of big plays. And we ran the ball well, Cam Wiedemann had a big game, Logan Raben had a big game, and I felt like once we got into a rhythm offensively we were hard to stop.

"I really think that all three phases of our game have been really solid and that gives us an opportunity to expose some weaknesses. I feel like the more solid each unit gets, the more we separate from people."

The win sets up a winner-take-all for the conference title next week as the Saints host Pea Ridge, also unbeaten in the 4A-1 after smacking Green Forest 47-14 Friday night.

"We get to play for a conference championship," Conaway said. "It's an opportunity for us to earn a reward for putting in the work this season.

"(Pea Ridge) is a very, very good football team. Our excitement this week is going to be huge. Pea Ridge always brings a great crowd, and it should be a really, really good high school football game."

• The win was Shiloh Christian's seventh-straight by more than 30 points.

• There were zero turnovers in the game.

• Next week Gravette will face rival Gentry on the road, while Shiloh Christian will return home to take on Pea Ridge.

Print Headline: Lions score first but then crushed by Saints