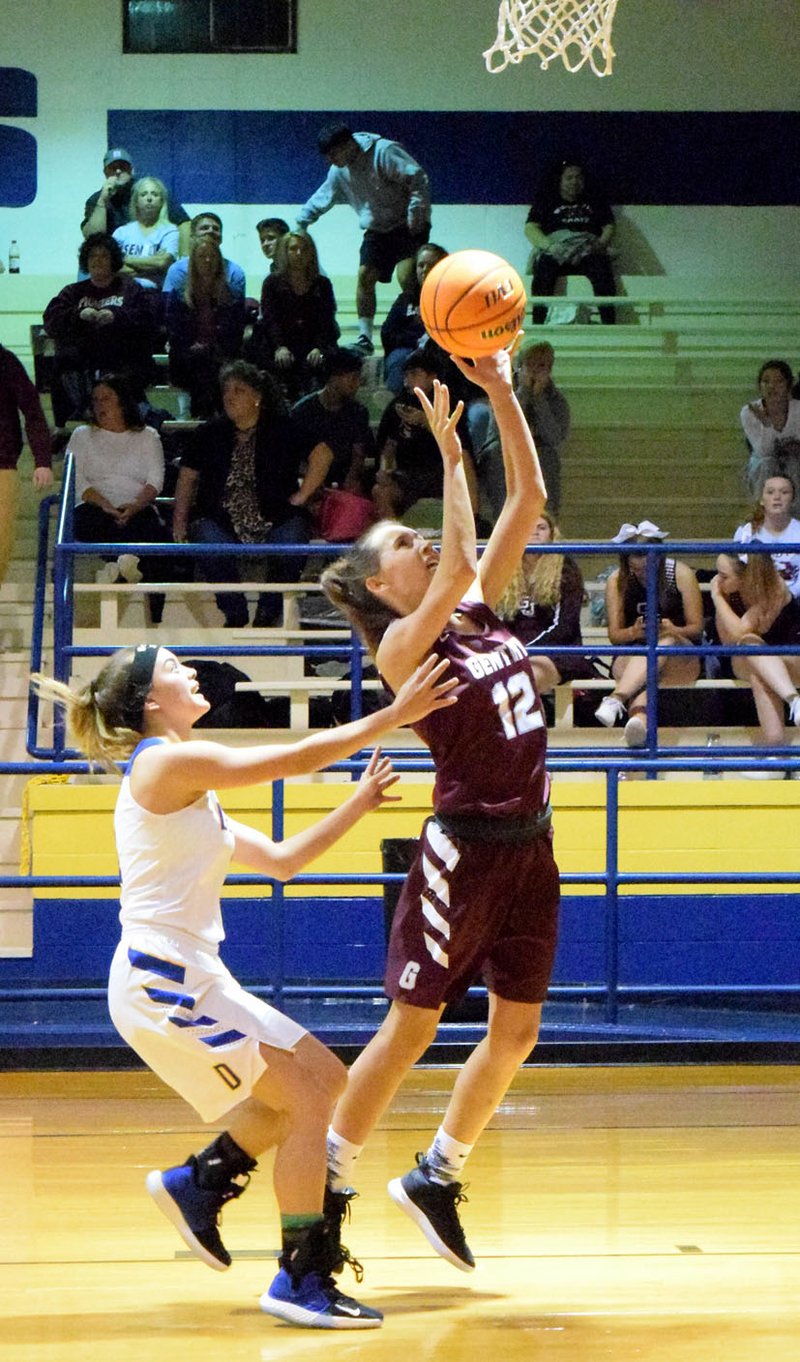 Westside Eagle Observer/MIKE ECKELS After stealing the ball at midcourt, Lady Pioneer Jaiden Wilmoth puts up a breakaway jumper as Lady Bulldog Destiny Mejia attempts to play catchup during the first quarter of the Decatur-Gentry girls' basketball contest in Decatur Thursday night. Wilmoth led the way in scoring for the Lady Pioneers with 17 points.

DECATUR -- The change of venue to Decatur had little effect on the Lady Pioneers as the Gentry girls rolled over the Decatur Lady Bulldogs by 34 points in a nonconference contest on Thursday.

The game was originally scheduled to take place in Pioneer Gym on Friday. Because both schools' teams were scheduled to play in the Lincoln Turkey Shootout tournament on Saturday, the venue was changed to Peterson Gym Thursday night.

The first quarter was all Lady Pioneers as Gentry effectively shut down the Decatur offense, holding the Lady Bulldogs to a single two-point field goal. Behind the leadership of Jaiden Wilmoth, the Lady Pioneers went on an offensive tear, scoring 26 points during the 8-minute quarter. Gentry held Decatur to only five points in the second quarter while adding 15 points to its first-quarter score. The Lady Pioneers ended the first half leading by 34.

Decatur's offense picked up the pace in the third quarter, outscoring Gentry 18-15, but was only able to cut into the point deficit by three.

Leading the way for the Lady Pioneers was Jaiden Wilmoth with 17, followed by Ariel Nix and Emily Toland each with nine. Ahrya Reding contributed seven points and Heidi Vinson added six to the scoring effort.

For the Decatur Bulldogs, Anabelle Schopper led the way with 11, followed by Abby Tilley with nine, Destiny Mejia and Kaylee Morales with three each and Myra Flores with one.