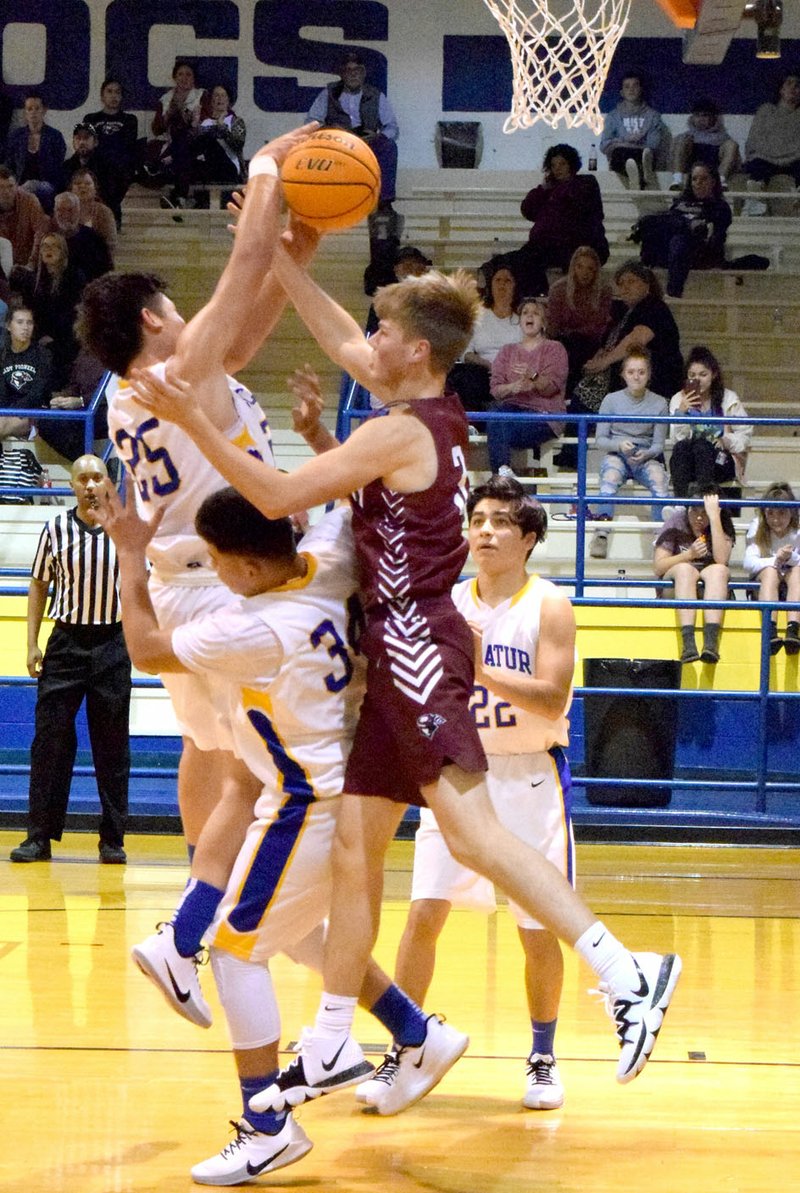 DECATUR -- Depending on which side of the bleachers fans were sitting, it was a good night or a bad night. For Gentry fans, the news was all good. However, if you were a Decatur fan, the news was not so great.

The nonconference contest between the Gentry Pioneers and Decatur Bulldogs was originally scheduled for Pioneer Gym in Gentry on Friday night. Due to both teams being scheduled to participate in the Lincoln Turkey Shootout on Saturday, the venue was changed to Peterson Gym in Decatur on Thursday. This contest turned out to be anything but dull for fans on both sides.

The game started rather slowly with both sides posturing to see how offense and defense strategies worked. Ninety seconds into the first quarter, Decatur's Christian Ramirez hit a field goal just inside the left wing's three-point line for the first two of the contest. The Pioneers answered with a three-point field goal on the next possession to take the lead for the first time. In the next two minutes, the lead changed back and forth until the game was tied at 7 all. Then field goals by the Pioneers and Bulldogs made it a nine all contest. Gentry then went on an 8-0 run to end the first quarter up by a score of 17-9.

Gentry continued to widen the point gap during the second quarter, outscoring Decatur 14-6 to take a 16 point lead into the half-time break.

Decatur tried to make up some ground in the second half but, every time the Bulldogs closed in on the Gentry lead, the Pioneers went on a run. The Pioneers extended their lead to 21 by the end of the third quarter. The Bulldogs mounted one final push with three minutes left in the game and closed the gap to within nine points before a Gentry timeout shut down Decatur's offensive run. The Pioneers went on one final run before the clock ran out to claim a 20-point victory over the Bulldogs, 60-40.

Leading the scoring effort for Gentry was Cory Hockenberry with 14 points (four three-pointers). Garrison Jackson and Casey Bates contributed eight points each to the Pioneer offensive effort. Others scoring points included Beau Tomblin with 7, Brian Magana and Luke Fox with 6 each, Blake Wilkinson with 4 and Charlie Reams with 3. Andrew Godfrey and Huntlee Wilkerson had 2 each.

For the Decatur Bulldogs, Christian Ramirez led the way with 12, followed by Enrique Rubi with 8. Completing the Bulldog scoring effort was Kevin Garcia with 5, Adam Garcia and Conner Sutton with 4, Trevor Girdner with 3, Jose Rubi and Seth Coleman, each with 2.