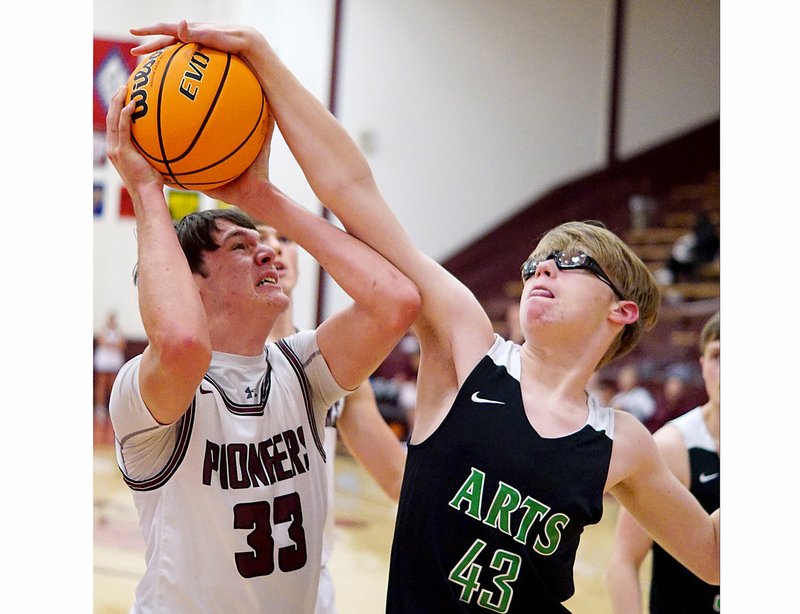 Westside Eagle Observer/RANDY MOLL Gentry's Garrison Jackson attempts a shot under the basket but his shot is blocked by Luke Seay of Arkansas Arts Academy on Nov. 19 at Gentry High School.

GENTRY -- The Pioneers overpowered the visiting Diamonds of Arkansas Arts Academy in a nonconference game on Nov. 19 at Gentry High School. The final was 65-34 in favor of Gentry.

Beau Tomblin led the Pioneers in scoring with 13. Garrison Jackson had 11, and Corey Hockenberry hit three treys for nine.

The Diamonds also scored eight in the first quarter and 10 in the third.

The Pioneers played a strong fourth quarter in their season opener to win the nonconference game against the Life Way Christian Warriors, 36-31, in a game at Gentry High School on Nov. 18.

The Pioneers were up by one, 9-8, at the end of the first quarter. Gentry's points came on two three-pointers by Luke Fox and another by Brian Magana.

The second quarter didn't look so promising, with the Warriors outscoring the Pioneers, 12-6, in the quarter and taking a 20-15 lead. Luke Fox hit another trey for Gentry, and Beau Tomblin put in a shot for two. Garrison Jackson hit a free throw.

Life Way extended its lead by another two points in the third quarter and finished up 27-20. Casey Bates put in two shots for Gentry and Jackson added another free throw.

Jackson put in three deuces in the final quarter. Bates added two more, and Fox another, with Blake Wilkinson putting in four free throws to put Gentry back on top by five. The Warriors managed only four points in the quarter.