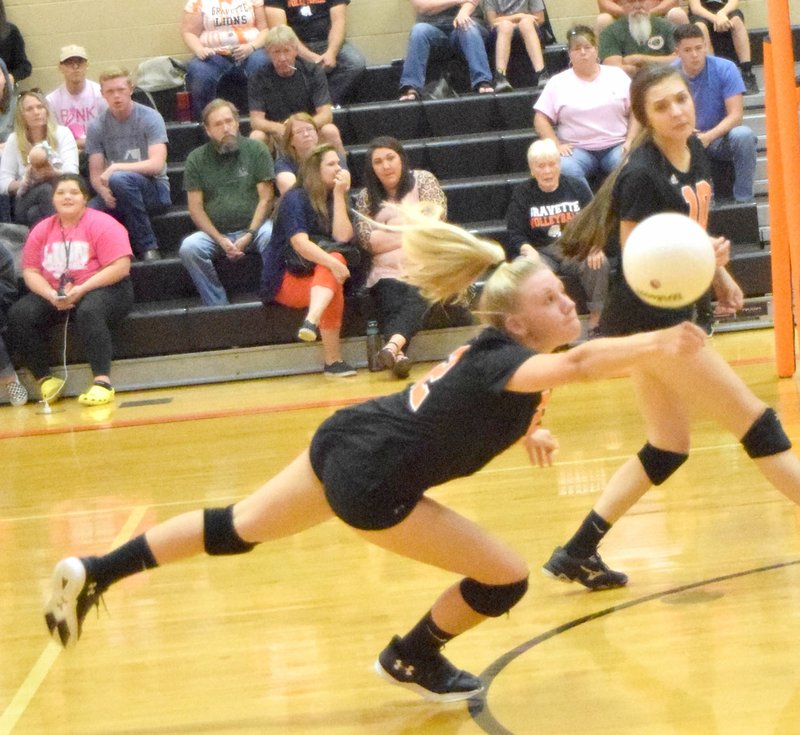 Westside Eagle Observer/MIKE ECKELS Lady Lion Nicole Vogt uses a one-armed dig to save a Berryville pass during the Thursday Gravette-Berryville volleyball contest at Gravette High School. Vogt managed to get the ball back into Lady Bobcat territory.

GRAVETTE -- The Lady Lions opened week seven of the 2019 volleyball season with a conference victory over the Huntsville Lady Eagles Oct. 1 in Huntsville. But when the team returned home Thursday, it was a different story when Gravette faced off against the Berryville Lady Bobcats in the second conference match of the week.

In the Huntsville contest, the Lady Lions had a little trouble keeping up with the Lady Eagles as Huntsville racked up the first set win, 25-11. The Lady Lions regained their focus in set two, claiming the win, 25-11. The battle for set three went back and forth with both teams taking the lead by one in the final stages. Gravette's three straight points gave them the third set win, 25-22. The Lady Lions surged ahead of the Lady Eagles by 12 points to take the fourth and final set, 24-13, and the conference match, three sets to one.

The Lady Lions returned to the gym at Gravette High School Thursday for the second 4A West conference match of the week against the Lady Bobcats. The battle was on as several long volleys between Gravette and Berryville kept the set close until seven straight points by the Lady Lions gave Gravette the first set victory, 25-18.

Before the beginning of the second set, both coaches and the officials agreed to switch courts after each set, a practice that is often done at Arkansas Activities Association sanctioned matches. This unnerved the Lady Lions, who were used to playing on the same side of their home court. Berryville dominated the set, taking down Gravette by 16 points, 25-9.

When the Lady Lions switched back to their normal side of the court, the team recovered its composure and once again fought hard against the Lady Bobcat attacks. Berryville reversed Gravette's luck in set one by claiming the third set by seven, 25-18.

In the fourth and final set, several long volleys by both teams got the fans on their feet and back into the contest. But the Lady Bobcats prevailed, taking the set, 25-21, and the match, three sets to one, over the Lady Lions.

The Lady Lions were to hit the road Tuesday (after press time), traveling down the Arkansas 59 corridor to face the rival Gentry Lady Pioneers at Pioneer Gym in Gentry.

The Lady Lions continue on the road to face 4A Northwest Conference leaders, the Farmington Lady Cardinals, Thursday at Farmington High School. The varsity will follow the seventh grade, junior high A and junior varsity matches which are scheduled for a 4 p.m. start.