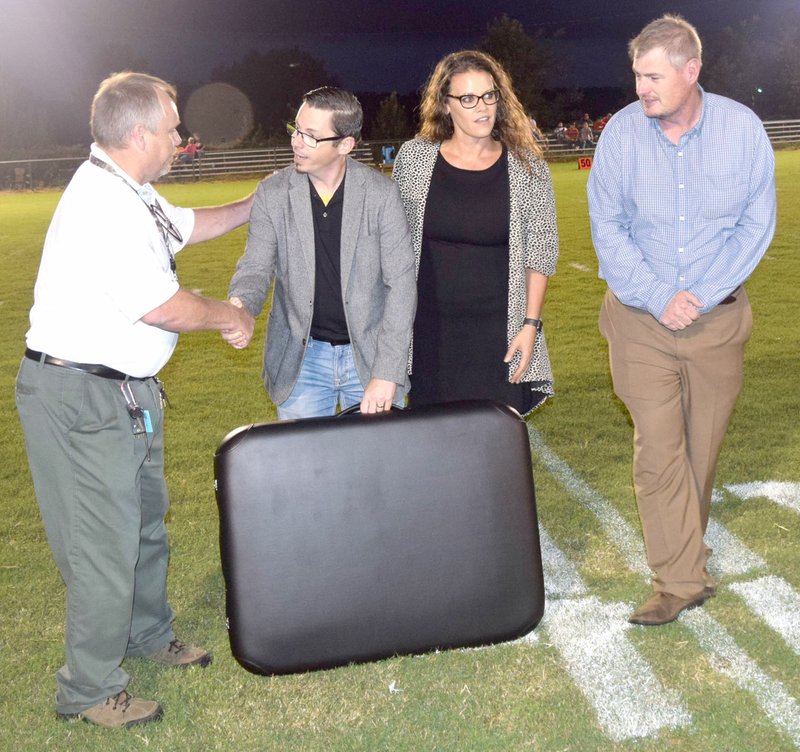 DECATUR -- During the opening game of the 2019 football season, the Decatur Athletic Department received a donation of sporting equipment from a local Decatur family. This equipment will aid coaches and help training staff tend to players' needs before and during each sporting event.

As the halftime festivities began in the Aug. 30 Decatur-Watts, Okla., eight-man football contest at Bulldog Stadium in Decatur, Ladale and Brad Clayton, along with Toby Conrad (Decatur High School principal) and Steve Watkins (Decatur superintendent), walked to the 50-yard line for the presentation of two portable treatment/massage/sideline trainer's tables.

"We wanted to donate these tables to the athletic department because it was something they really needed to take care of the many athletes who participate in the school's sports program," said Ladale Clayton, who serves as the high school cheer coach.

The table, which folds in half and stores in its own carrying bag, can be set up next to the Bulldog benches or under a tent and allows the coaches and trainers to attend to player injuries or prevent injuries by reinforcing, with tape, wrist, knees, or ankles, the areas of most common athlete injuries.

One of the tables will be permanently stationed in the new gym at Decatur Middle School, while the second will be used at Peterson Gym, Bulldog Stadium and on the road with the football and soccer teams.