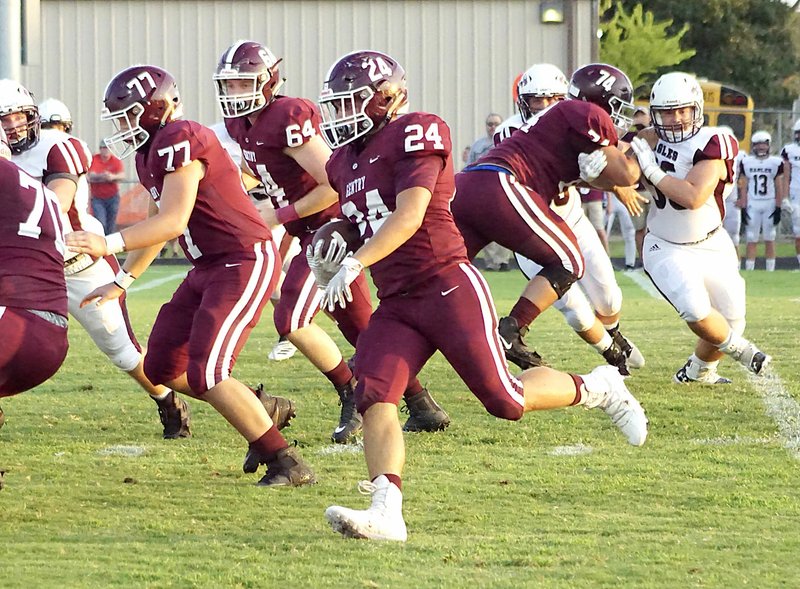 Westside Eagle Observer/RANDY MOLL Behind the blocking of his teammates, Gentry junior Brennan Crosby carries the ball down the field for the Pioneers during play against the Huntsville Eagles on Friday, Sept. 6, 2019, in Pioneer Stadium.

GENTRY -- The Pioneers struck first on Friday night and scored enough points to win in the first quarter with two touchdowns and two 2-point conversions. And the Pioneers built on that lead with six points in the second quarter and eight each in the final two quarters of play to pick up a 38-15 win in Pioneer Stadium.

Brandon Atwood carried in two touchdowns and two 2-point conversions. Beau Tomblin, Zach Jarnagan and Garrison Jackson caught passes for touchdowns. Jarnagan ran the ball across the line and caught one in the endzone for extra points, as well.

After Gentry turned over the ball on an intercepted pass in the first quarter, Mateo Cain picked off a deflected Huntsville pass to give the ball back to the Pioneers and make it possible to put more points on the board. Cain also had three solo tackles and an assist in the game. William Pyburn led in tackles with two solos and six assists.

The Pioneers had 199 rushing yards and 165 passing yards in the game.

The Huntsville Eagles scored seven points in the first quarter and eight in the fourth.