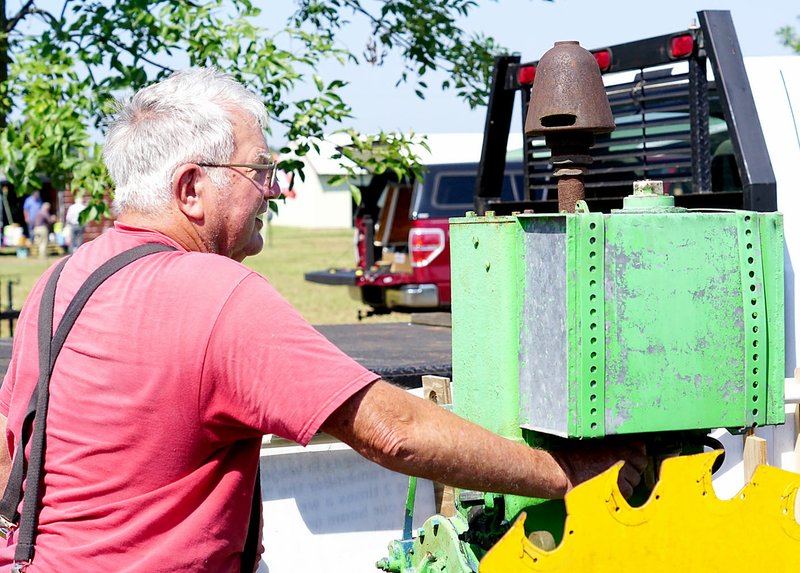 Westside Eagle Observer/RANDY MOLL Ed Malcom, of Pineville, Mo., gets read to start a 1924 LeRoi engine at the Tired Iron of the Ozarks showgrounds on Friday, Sept. 6, 2019. He said the 2-cylindar, hopper-cooled engines were so well made they never wear out and need almost no maintenance. He said he has an engine that ran 69 years in a rice field, logging 290,000 hours, and it still runs fine.

GENTRY -- Last weekend was the 28th annual fall show of the Tired Iron of the Ozarks. And, once again, the show offered the opportunity for young and old to see and learn about old tractors, engines, farm implements and household machines and gadgets which were commonly used as a part of everyday life in the region in years past.

The weather was unseasonably warm but many still came out to show off their tractors and engines and to demonstrate what rural farm life was like in northwest Arkansas in the late 1800s and early 1900s. And though things were slow on Friday, many more came out on Saturday and Sunday to take in the show.

Features of the show included two rows of old tractors, a parade of power each day at noon, working sawmills, a blacksmith shop with demonstrations by members of the Blacksmith Organization of Arkansas, old engines used for a variety of functions on the farm and in the home, a log cabin with furnishings of the era, rope making and more.

The show opened Friday and continued through Sunday afternoon at the club's show grounds, located at 13344 Taylor Orchard Road, between Gentry and Siloam Springs.

Tired Iron of the Ozarks is a club dedicated to the preservation and exhibition of antique engines and tractors. For more information about the club or its shows, visit the club's website at www.tiredironoftheozarks.org.