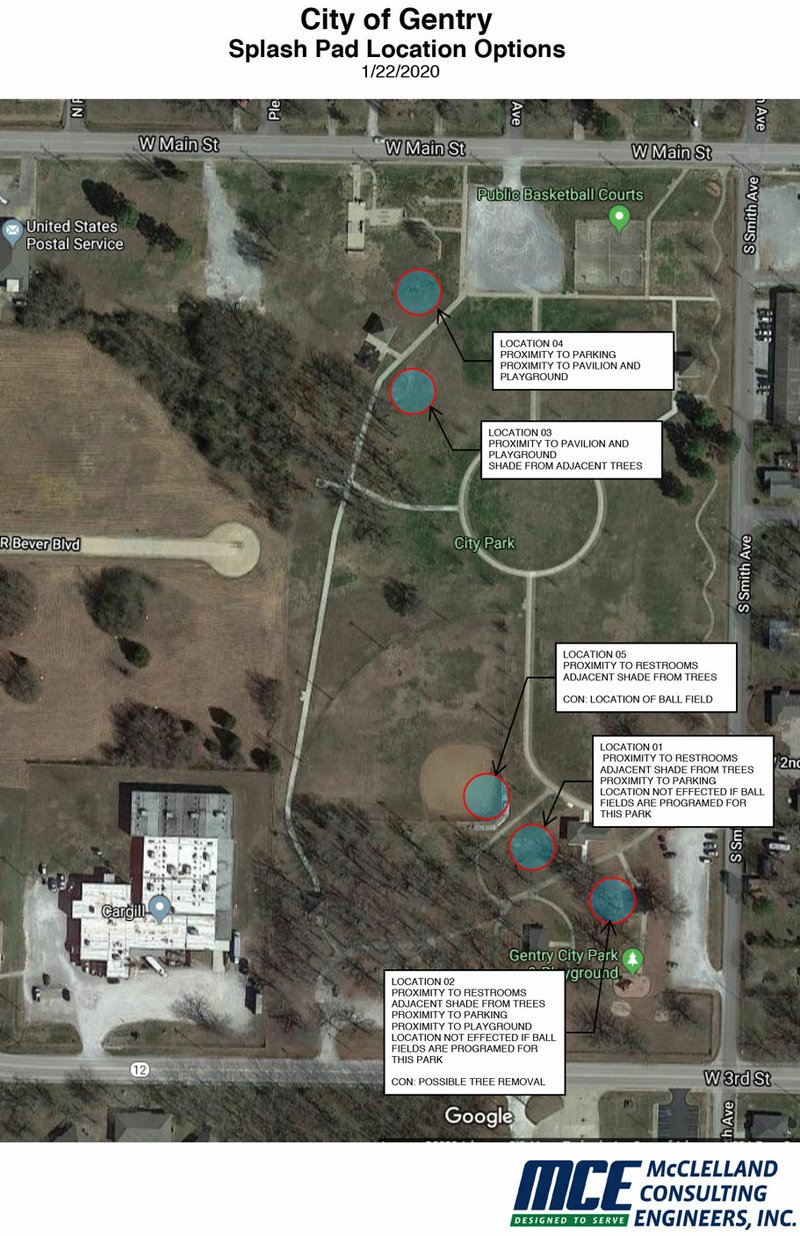 MCCLELLAND CONSULTING ENGINEERS Council members preferred locations 3, 4 or 5 for construction of a new splash pad in Gentry City Park. The actual location will be determined, in large part, by the availability of sufficient water and by the effects of drainage. Plans are to eventually build another restroom facility on the north side of the city park.

GENTRY -- The city council accepted the bid of Crossland Construction for the Dawn Hill East bridge replacement project at its meeting on Feb. 3 and, once the Arkansas Department of Transportation approves the bid, the contract can be awarded and work on the new bridge can begin.

The existing bridge was damaged during flooding nearly three years ago and has been closed to vehicle and foot traffic since the April 2017 flood.

According to a letter to the city by the Garver engineering firm, "bids were received online and publicly opened for Dawn Hill East Road Bridge Replacement project at Gentry City Hall at 2 p.m., Jan. 22. Bid invitations were publicly advertised and a total of two bids were received for the project.

At a November 2018 meeting, Johnston reported that current plans involve rebuilding the bridge in three spans and making the bridge 2 1/2 feet higher than the old bridge, with it designed to be overflowed in a major flood event. He said the new plan would have no negative impact on upstream property owners.

The Federal Highway Administration will reimburse the city for 80 percent of the cost of the bridge replacement.

Also approved by the city at its council meeting was the final plat for the Phillips Park subdivision. The final plat was approved on three readings with a single vote and with the condition that corrections be made to the scale notations on the final plat, to the signature lines and that work on a drainage ditch through the subdivision which had been delayed due to frequent rains be completed.

Councilmember Jason Williams voted against approving the final plat because the corrections were not reflected in the paperwork presented to the council from the planning commission meeting. He also voted against passing an emergency clause and, with council members Dan Erskin and Jimmy Thorburn absent, the emergency clause failed to have the necessary 2/3 approval of the full council to pass.

As a result of the Feb. 3 vote on the emergency clause, the approval of the final plat will not be effective for 30 days to allow time for publication of the ordinance.

A resolution was passed by the council setting a hearing for 6:30 p.m. on March 2 in council chambers regarding a petition to vacate a 30-foot strip of land running north and south between Meeker Drive and Wilson Drive which was originally part of Moongate Estates subdivision but has not been used by the city.

Though no votes were taken, council members voiced their opinions regarding city park plans in favor of keeping the main city park as a general use park with walking trails and pavilions and locating the sports complex in the parkland to the south along the railroad or possibly to other land if land can be found and purchased at a savings over grading work which would be needed to place ball diamonds in the south park area.

Estimates provided by McClelland placed the cost of grading the south site for ball fields at $940,000. A rough estimate of grading to place the ball fields in the main park was $330,000, but Johnston pointed out that the amount did not take into account recent work and amenities in the current park which would be lost. He pointed out that some of that work was done with grant money and it wouldn't look good for the city to demo it and build something else there. Council members agreed they did not want to destroy work which had been completed in the park with grant funds.

The council also voiced preferences for two or three out of six proposed locations for a splash pad in the main park, with the preference being on land along the walking trail just south of the veterans' memorial or on land in the old ballfield in the park. Discussion occurred over the proximity of a splash pad to restrooms, but park plans include adding a second restroom on the north side of the park, though that may come later than the splash pad.

The council directed the mayor to look into the most suitable of the two general locations in the main park for a splash pad and to explore land purchase options for a sports complex and to compare costs with building ball fields in the city-owned land a few blocks south of the current city park.

Johnston told the council that Garver engineering firm would be bringing 60-percent plans to the council next month for a scaled-back water storage facility near the Benton/Washington Regional Public Water Authority tanks along Y-City Road. He said that Simmons was building its own storage facility there as well, allowing Gentry to scale back the size and capacity of its needed storage facility.