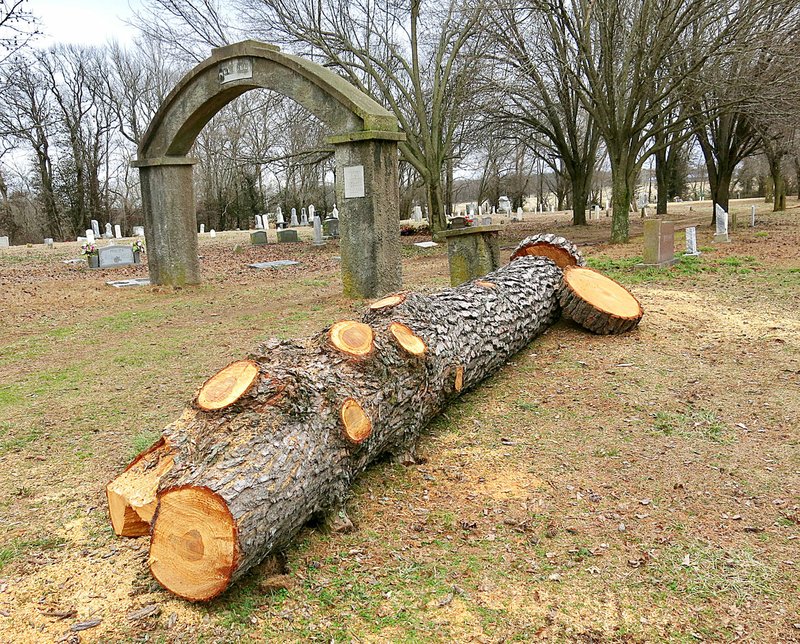 Westside Eagle Observer/SUSAN HOLLAND The trunk of a large pine tree that flanked the 1936 concrete arch at Bethel Cemetery lies on the ground just northwest of the arch. The tree was downed by workmen recently since it was leaning toward the arch and members of the Friends of Bethel Cemetery feared it might damage the historic structure.

GRAVETTE -- The historic Bethel Cemetery is located south of Gravette, just a short distance east of Arkansas Highway 59. The burial ground has a long history, with some tombstones dating as far back as 1818. At least 50 veterans are buried in the cemetery, including 28 known Confederate veterans and six unknown soldiers buried during the Civil War conflict.

An article in the 1993 Gravette history book, written by Louise Russow, says that the six unknown soldiers were said to be Union soldiers bushwhacked on Little Spavinaw.

"Where they came from, no one knew," Russow wrote. "The secrets of their lives were buried with them."

Bill Degge, a member of the Benton County Cemetery Preservation Group, has been cleaning and refurbishing the headstones of Confederate veterans at Bethel and other area cemeteries in recent years.

"This plot of ground for Bethel Cemetery was donated by Colonel Bill Hastings," Russow's article continues. "Records in Benton County Courthouse show that in August 1880, Colonel Hastings sold some land. The deed read a certain number of acres were sold, except that area of Bethel Cemetery that was a burial ground. In May 1991, a marker was erected in honor of Colonel Hastings by members of the Bethel Cemetery Association. In the early days, there were two churches, the Methodist on the north and the Antioch Baptist to the south on the hill. On the west was a highway, and the watermill on a creek east."

A simple concrete arch at the northeast corner of the cemetery features a plaque noting that it was erected in 1936 "in honor of our dead." The archway was constructed by a group of people from the community who worked in that year to clean and refurbish the cemetery.

Then, in 1980, a number of people who had family members buried at Bethel organized the Bethel Cemetery Association, electing officers and stewards.

Friends of Bethel Cemetery met recently to make decisions about the future of the cemetery. Three members of the Benton County Cemetery Preservation Group, President Nancy Feroe, Dorothy Miller and Becky Feroe, were welcomed as visitors. They reported that 337 stones in Bethel had been cleaned in the last few months. The Friends group responded by donating a gift of $150 to the county preservation group.

Rows of Bradford pear trees are planted at Bethel Cemetery and have long adorned the property with their beautiful blooms in the spring. However, several headstones in the cemetery have been broken in recent months because some of the trees are diseased and limbs are breaking off at an alarming rate. Therefore, the members made the difficult decision to remove a number of these trees. They also approved hiring a workman to remove the large pine tree beside the arch because it was leaning toward the arch and they feared it might damage that structure. Members also agreed to the platting of the cemetery, which has been needed for many years.

Stewards of the Bethel Cemetery have been responsible for raising funds and soliciting donations to pay for upkeep and mowing at the cemetery. Volunteers are needed to sit at the cemetery during the three-day Memorial Day weekend (Saturday, Sunday and Monday) in May and ask for donations from visitors to the cemetery. Anyone interested in helping by working a couple of hours is asked to contact Betty Russow, 479- 787-0625, who will set up a schedule for volunteers.

Assistance is also needed to help refurbish the cemetery during the annual cleanup day, which is scheduled each year on the first Saturday in May. This year's cleanup day will be Saturday, May 2, and work will begin at about 9 a.m. Workers are asked to bring their own tools. All help will be appreciated.

The next meeting of the Friends of Bethel Cemetery will be held at 2 p.m. Sunday, April 26, at Berean Ministries Church, 303 Birmingham S.E., in Gravette.