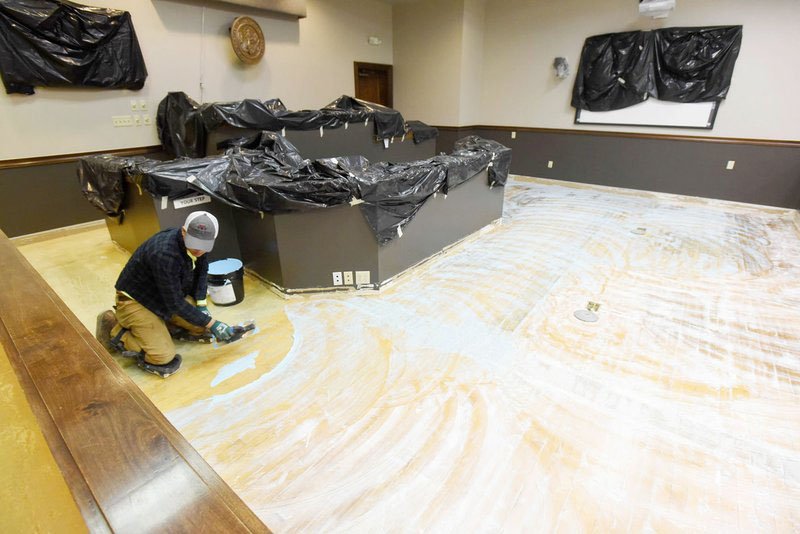 NWA Democrat-Gazette/FLIP PUTTHOFF Sam Bouphasiri spreads glue on the floor of a courtroom at the Benton County Courthouse annex to prepare it for carpet.

BENTONVILLE -- Benton County Prosecutor Nathan Smith projected his office's caseload would exceed 3,000 cases in a year for the first time. He was right. The Circuit Clerk's Office opened 3,178 criminal cases in 2019.

"I think the increase will continue as long as the population grows," Smith said. "More people means more of everything people do and some people commit crimes."

The county will add a judge, a deputy prosecutor and a deputy public defender to try to keep up with the growth.

The Quorum Court added a deputy prosecutor position to this year's budget. Smith plans to dedicate the new position to felony prosecution.

The average load for a felony deputy prosecutor is 200 active cases. That doesn't include any revocations they handle, Smith said. When an individual violates a condition of probation, He faces revocation.

When he was a deputy prosecutor, Smith said he carried two boxes loaded with files to court. Deputy prosecutors now would have to carry as many as four boxes to court if they didn't use portable computers, he said.

The Quorum Court also added a deputy public defender's position in the 2020 budget.

Chief Public Defender Jay Saxton said he will have 12 deputies. The state pays for one part-time and six full-time positions and the county pays for 5½, he said.

A circuit judge will be added in 2021. The state approved the seventh judgeship during last year's legislative session. Christine Howart and Tony Noblin are seeking the position in the nonpartisan election on March 3. The winner will take the bench Jan. 1.

Circuit Judge Doug Schrantz, who serves as the administrative judge, said he and the five other Benton County circuit judges have discussed what type of cases the new judge will be assigned. The administrative plan must be amended and assignments will go out in the spring, he said.

The plan is for the new circuit court judge to use the old courtroom on the second floor of the courthouse, County Judge Barry Moehring said. The space was last used as a courtroom in 2012 by former Circuit Judge Mark Fryauf.

Moehring is going to take three plans for more courtrooms to the Quorum Court later this month.

Residents voted down a one-eighth percent sales tax increase in March 2019 to build an 87,000-square-foot, $30 million courthouse on Northeast Second Street. The tax would have been for 54 months.

The new proposals will call for building smaller courtrooms in the former county jail space behind the courthouse, Moehring said.

The inmate population at the jail also is a concern. Moehring will propose this year building a structure similar to the jail's H Pod housing female prisoners. The new pod would be for misdemeanor prisoners. H Pod holds about 140 inmates and opened in 2011. The cost was $1.5 million for the 15,698-square-foot structure expanded by 2,160 feet in 2016, said Bryan Beeson, county facilities manager.

The county will have to deal with aging courts facilities spread across downtown until a new courthouse is built. The holidays were the perfect time to do some upgrades in two courtrooms, Beeson said.

The carpet in Judge Brad Karren's courtroom and office in the courthouse annex was replaced last week just as carpet replacement was finished in Judge John Scott's courtroom, Beeson said. Carpet also was laid in the Public Defender's Office at the Bogle Building on Southwest 14th Street.

"We do not have a new building to move Judge Karren into and, until we do, we will continue to hold court in the old Post Office," Beeson said. "This is one of our most highly trafficked buildings, so we must replace and repair items as needed."

Doing the work during the holidays worked best because there were no scheduled court dockets, Beeson said. Jail inmates moved the furniture out of the areas where the carpet was replaced, he said.

The county used carpet tiles instead of the rolled carpet, Beeson said. The tiles can be pulled up and replaced as they become worn or soiled, he said. That saves the county on maintenance and the cost of having to put in new carpet all at one time, he said.

The cost for carpeting the two courtrooms and Public Defender's Office was just over $34,000, Beeson said. The average age of the carpet that was replaced was 14 years old, he said.

"We will continue to maintain all of our facilities no matter their age," Beeson said. "Our staff, legal teams, judges and citizens would not expect anything less. These courts buildings are landmarks in Benton County and are a huge part of our history. We will restore whatever is necessary while keeping the integrity of the building in order to continue serving the county."