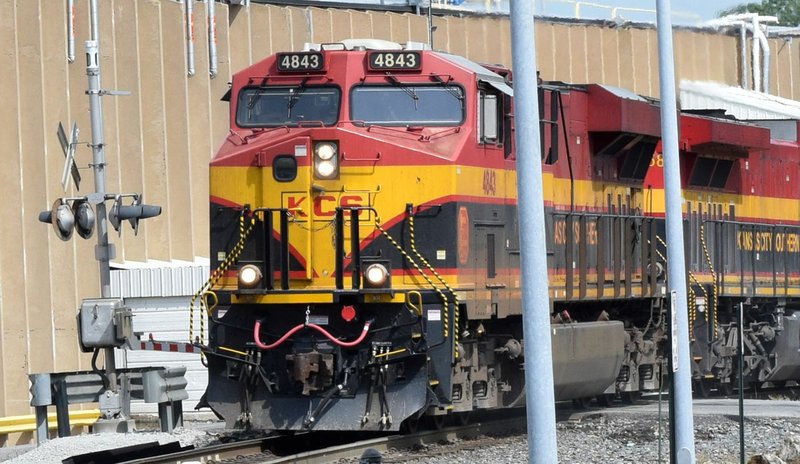 Westside Eagle Observer/MIKE ECKELS A southbound Kansas City Southern grain train passes through the Roller Ave. crossing on its way to parts unknown Aug. 20, 2019. According to KCS, 12-15 trains cross over this intersection on a daily basis.

DECATUR -- "Why do the trains have to blow their whistles at all hours of the night?" was a question Alderman James Jessen asked Mayor Bob Tharp during the Nov. 25 Decatur City Council meeting in the meeting room at city hall.

Jessen received several complaints from his constituents concerning the Kansas City Southern freight trains blowing their whistles too much during the early morning hours as they transition through Decatur.

Tharp was unable to answer Jessen's question until the Dec. 9 council meeting. After contacting the railroad concerning this question, KSC replied by email to the mayor.

According to the Kansas City Southern CID group, "The horn is executed as they (the train) enter a crossing and/or when lights at the crossing are flashing. Decatur has two crossings and both have safety gates, Roller Avenue and Third Street. The engineer on the train is responsible to manually execute the horn (one long, two shorts and a long is standard). The engineer may adjust the number of executions of the horn at will based on traffic approaching the crossing, people approaching the crossing and any other observations" (email to Mayor Bob Tharp from KCS).

The Federal Railroad Administration (FRA) has strict guidelines on the sounding of train horns, the first of which is to warn motorists and pedestrians of the approach of an oncoming train, especially near blind curves where obstacles like buildings, trees and even parked train cars obscured visibility for both the trains and vehicles, especially at night.

The Train Horn Rules were established in the late 1980s to counter the rise of train/vehicle collisions at specific "highway-rail grade crossings" where a whistle ban was in place. At these crossings, the FRA noticed a significant increase in the number of train/vehicle collisions. In 1994, this increase prompted Congress to order the FRA to enact a federal regulation requiring train horns to be sounded at all public highway-rail crossings.

FRA Train Horn Rule 49 CFR 222 "requires the engineer to sound the horn under various circumstances including when a train is approaching and passing through a public highway grade crossing.

• Be within 96 and 110 decibels, a sound level equivalent to that of a lawnmower.

• Be sounded approaching persons on or near the track

• Be sounded while moving through tunnels" (email from KSC to Mayor Tharp).

These rules were put in place for the protection of John Q. Public who does not always obey the driving rules at railroad crossings. According to Operation Lifesaver, an organization that works to raise awareness for safety at rail crossings, in 2017 there were 2,123 train/vehicle collisions resulting in 271 deaths and 844 injuries. A year later, in 2018, the number of incidents involving trains and vehicles rose to 2,217 resulting in 262 deaths and 840 injuries.

Most of these accidents were attributed to driver impatience or poor judgment at rail crossings.

A cement truck had just crossed under the eastbound crossing guard at Roller Avenue as it came down, catching it between the crossing guards as a KCS coal train traveling south was about to enter the intersection. Fast thinking on the part of the truck driver led him to avoid a collision by sliding far enough off the road to get past the guard in front of the truck.

A northbound freight, after blowing its whistle the required amount of times, was about to enter the same intersection when a teenage boy tried to beat the train. The steps on the right front side of the locomotive just missed the boy.

A few months later, the same observer noticed three boys walking on the track near the Decatur depot when a southbound train approached them. After repeated blasts from the horn by the engineer, the boys decided to vacate the tracks.

This is the "why" train engineers have to blow the whistle so much, even at night, for the protection of the public.

A fully loaded coal train consisting of five EMD locomotives weighing 240 tons each and 120 hopper cars weighing in at 140 tons loaded traveling as slow as 10 miles an hour can take a quarter to a half of a mile to stop. The higher the speeds, the longer it takes for a train that size to stop. And a locomotive hitting a tractor-trailer truck will drag it along the tracks, taking out everything in its path, including signal towers, rail buildings, trees and anyone standing near the tracks.

In his research, Tharp discovered that in 2005 the FRA adopted and implemented a quiet zone regulation in the Code of Federal Regulations.

"A FRA quiet zone exempts the rules of trains sounding horns when approaching a public crossing. It requires a section of rail line at least one-half mile in length that contains one or more consecutive public grade crossings or a single public grade crossing at which locomotive's horns are not routinely sounded" (FRA Code of Federal Regulations).

This is an option that Tharp and the city attorney Michael Nutt will explore for the Decatur community before the next council meeting on Jan. 13. There are nine steps that must be completed by the city council, FRA Crossing Management, Kansas City Southern and the FRA before a quiet zone is established. But train engineers are still required to blow the horn at their discretion if needed. So Decatur residents may not see a quiet zone along the KCS line any time soon.