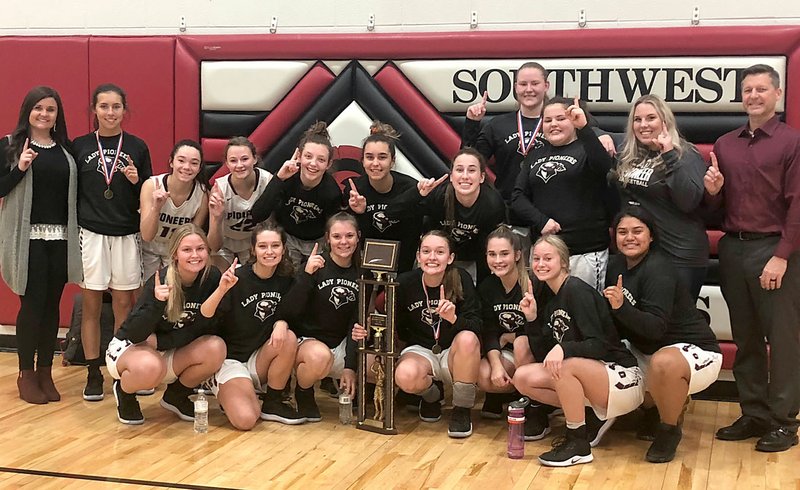 SUBMITTED The Gentry Lady Pioneers, with assitant coach Courtney Milsap (left) and head coach Toby Tevebaugh (right), show off their trophy after sweeping the Southwest Tournament in Missouri over the Christmas break.

GENTRY -- The Lady Pioneers took first place in the Southwest Tournament played in Missouri over the holiday break, beating Cassville, 52-22; East Newton, 42-23; and Southwest in Washburn, 53-21.

After matching Cassville point for point in the opening quarter Dec. 30 with treys from Meledy Owens and Ariel Nix and another foul shot by Nix, the Lady Pioneers jumped ahead in the second quarter, scoring 19 points and holding Cassville to six. Owens sunk two more three-pointers, with Emily Toland putting in two shots under the basket and Ahrya Reding, Jaiden Wilmoth and Heidi Vinson also hitting a goal in the quarter. Nix added two at the free-throw line and Toland one.

In the third quarter, Gentry held Cassville to three points while putting another 14 on the board. Toland added six points (two from the free-throw line), and Reding four. Nix and Vinson added two each.

Cassville put in six points in the final quarter, but Reding, Darien Welch and Alexis Fowler hit treys, and Welch added three more at the line for the 52-22 finish and the tournament trophy.

The Lady Pioneers played East Newton at Southwest in Washburn on Dec. 28 and came away with a 42-23 win.

Ariel Nix led the Lady Pioneers with 14 points in the game. Emily Toland had 11, and Jaiden Wilmoth eight.

Emily Toland scored 13 points for Gentry in the game. Ariel Nix had 10, and Reding nine in the game to lead their teammates in scoring.