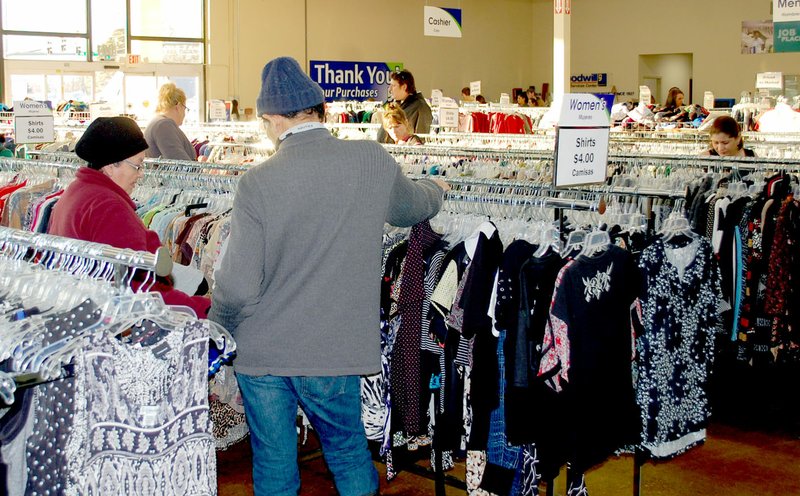 The local branch of the nonprofit was severely damaged when two tornadoes and strong winds hit Siloam Springs on Oct. 21, according to Cathy Manger-Nail, the regional director of retail operations. Associates were temporarily reassigned to other stores in Fayetteville, Rogers and Springdale, she said.

In addition to serving as a thrift store and drop-off location for donations, the Siloam Springs Goodwill offers a career center to help those who are seeking employment.

Customers and employees seemed to be glad the location was open. Business was good on the first day the store reopened, according to Cherryl Bunch, a racker who is responsible for hanging clothing.

According to Bunch, what separates this store from others is that the associates act as one giant family.

"We are all part of the Goodwill family but we are a pretty clingy bunch here," she said. "We stay involved in one another's lives here."

Jill Boyd, a member of management at the Siloam Springs store, added that the associates don't just come to this store and just work for eight hours. They know about each other's lives.

According to Manger-Nail, the company did reimburse mileage for the employees who had to commute to the corridor cities. However, Goodwill's employees still had to deal with traffic in the corridor, road construction, long hours on the road and working in a different setting.

Bunch is one of several associates who had to drive a significant distance in order to work. Bunch lives in Stilwell, Okla., and had to commute for several hours to the Goodwill at 3105 W. Martin Luther King Jr. Blvd. in Fayetteville.

"For a little bit I carpooled with one of the assistant managers, but that made me be on the road for four hours a day," Bunch said. "From Stilwell to here to meet her and from here to go to Fayetteville. I finally figured out a back road (U.S. Highway 62) to take, but it's through the boondocks in the dark and I am still on the road two hours a day."

Bunch also said that she had to contend with a lack of cell service when she traveled on Highway 62. Other associates faced their own issues when traveling.

Boston Balmer, another racker, said the two months she traveled U.S. Highway 412 to Springdale was the time when the highway department was repaving the road, while Mary Lyon, a wares associate who worked at the Goodwill located at 4301 S. Dixieland Road in Rogers, just got tired of the commute. None of the associates had small children, so daycare was not a factor.

"I think every manager at every store has kind of his own twist," Bunch said, "the way they manage, but my experience at (the location in Fayetteville on Martin Luther King Boulevard) was good and I met some good people."

The hardest part was feeling like they were the interlopers, according to Bunch. That was not the case for Lyon, who filled a vacancy in the store she was sent to.

"I do wares and they didn't have a wares person for two months," Lyon said.

Despite having positive experiences at the other locations, the associates and Siloam's customers were ready for the Goodwill in Siloam Springs to reopen. Lyon said customers would call the Rogers location to see when the Siloam store would be open. Balmer would count down the days and weeks before the store would reopen.

Eventually, the damage was fixed at the Siloam Springs store and the associates were able to return to work on Dec. 9. However, despite the roof being fixed, the associates still had to deal with construction on the interior of the store.

"They were still painting and everything. When we came back, we stayed in the back the first week in production, then we came out and cleaned the second week," said Boyd.

The biggest issue was that there was not a working bathroom. The associates would have to use a port-a-potty or go to the neighboring Subway to use the bathroom.

The store was originally supposed to open on Friday, Dec. 13, but there was still a lot to clean up, according to Bunch. Yet, everyone is happy to be back at their home store.

"(We are) thankful to be back with our family," Boyd said. "This is our family. We felt separated. Now we are back."