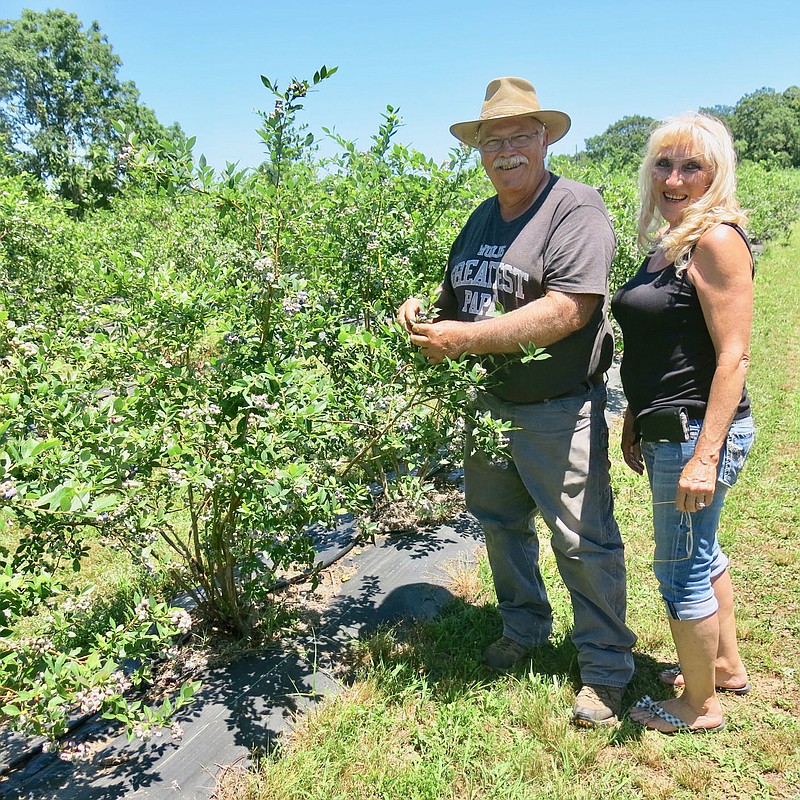 Westside Eagle Observer/SUSAN HOLLAND Joe and Eileen Tyler show some of the ripening berries on one of the many blueberry bushes at Rock-A-Berry Farm. Their farm, located at 10407 Orchard Road in Decatur, is open for customers who want to buy berries or just pick their own.

DECATUR -- Blueberries are ripening at Rock-A-Berry Farm in Decatur. Recent sunshine, combined with the abundant rains of early spring, has encouraged an excellent crop of the antioxidant-rich berries. Area families can enjoy an interesting outing while practicing social distancing and take home a tasty and healthful addition to their meals.

Rock-A-Berry Farm is located at 10407 Orchard Road. Customers may call owners Joe and Eileen Tyler at 479-752-7342 to schedule a time for a visit. Blueberries are available for $25 a gallon, or customers may pick their own for $15 a gallon. Sanitized buckets are provided, which pickers can fill and empty into plastic bags. All precautions are being taken to make the operation as safe as possible.

Joe is a Texas native, born in Gainesville, whose father worked in the oil fields there. Eileen was born in Denver, Colo. Her father was in construction work and the family moved to Gainesville when Eileen was just 15 and he learned of opportunities for building there. She met Joe soon after the move to Texas and they both say it was love at first sight. They began dating and married in 1976. They moved to Arkansas in the late '80s.

The Tylers settled on their farm on Orchard Road. They have planted 1½ acres in blueberries. They say they named their farm Rock-A-Berry because they had more rocks than berries. They grow several varieties, including Chandler, Duke, Blue Ray, Toro and Legacy. Joe says Toro and Legacy are two of his best producing varieties. There are also a couple of rabbit eye varieties, Onslow and Premiere. Joe explained that the rabbit eye varieties were once thought unsuited for growing here but changes in weather patterns have allowed them to be successful.

The Tylers have tried several varieties in recent years. They order a few plants which Joe places in a small test plot. If the bushes grow well, he orders more to plant in the garden. Smaller plants are cared for in raised beds nearby until they are large enough to transplant into the garden. Pine needles and pine straw help encourage their growth.

Growing blueberries is hard work. The berries require a lot of water and Joe says he walks several miles a day, going up and down the rows to make sure the drip irrigation system is working properly. Some plants are watered with a plastic drip tape which has small slits which release about a gallon an hour. The drip tape is buried under black plastic that covers the ground in each row. The plastic prevents weeds from growing and also discourages insect predators, cutting down on the need for insecticides.

The Tylers also have several blackberry bushes and blackberries, including Natchez and Osage varieties, which should be ripening in just a few weeks. They also grow a few rows of grapes, the popular Concords and other varieties, for their own use, but Joe says a late freeze eliminated most of them for this year.

Joe operates ChimDoc LLC. He is a chimney sweep, cleans, installs and repairs chimneys. He also sells fireplaces and fireplace accessories. He operated for several years as the Chimney Doctor but had to change the name when he incorporated the business. Being a chimney sweep is a nice complement to the berry farm since it keeps him busy in the fall and winter while the berries occupy his time in spring and summer.

The Tylers' son, Garrett, has worked with Joe as a chimney sweep but is now working installing and cleaning pools. Joe and Eileen also have two daughters, Starla Capshaw of Gravette and Amanda Wisdom of Springdale. Granddaughter Ava Wisdom, age 8, enjoys coming out to help pick berries and gather eggs on the farm.