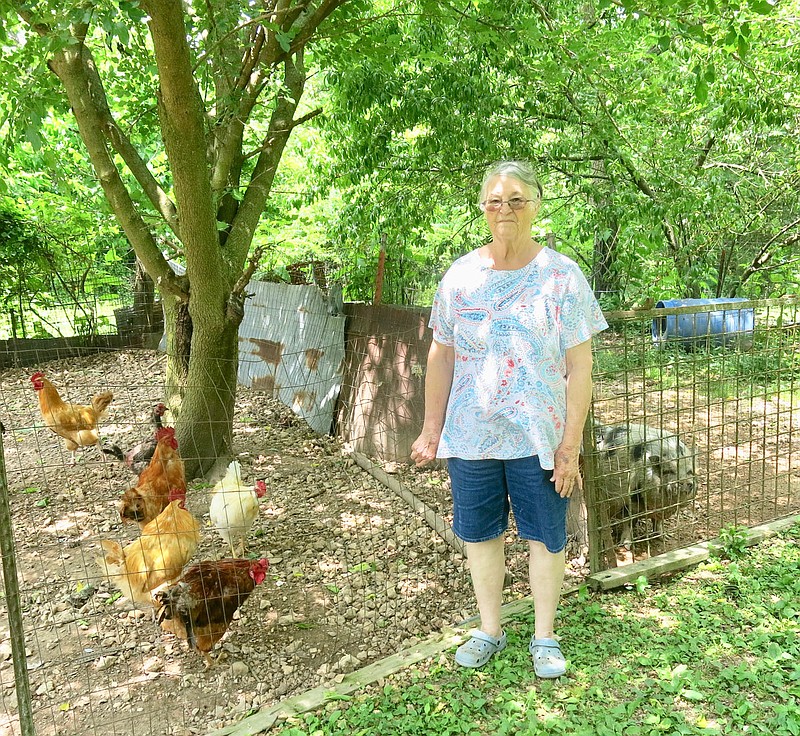 Westside Eagle Observer/SUSAN HOLLAND Faye Blair, of Gravette, shows a guest part of her flock of chickens on a recent sunny June afternoon. The large fruit trees in the pens provide welcome shade for the birds and the pot-bellied pig in the adjoining pen.

GRAVETTE -- "Menagerie" is defined in the dictionary as "a diverse collection of people or things." The word menagerie certainly seems to apply to the assortment of animals that are at home on the Faye Blair farm. Faye, her husband Al and her son Eddie Dyer live on a small farm on Sixith Avenue N.W. in the west edge of Gravette.

The Blair farm features quite a variety of animals. A small herd of goats lines the fence as one drives down the lane toward the Blair home. The younger ones romp and jump around, seemingly happy just to be alive. One of the youngest, only a few days old, is especially active. Just across the fence, in the front yard, is a fish pond that is home to a few goldfish.

When visitors arrive, they are greeted by the welcoming committee of eight small dogs, tails wagging and voices yapping. The resident house cat sidles up to each one, hoping to persuade someone to pet her. Faye explains that the calico female is named Spooky since she was acquired just before Halloween. Another female who lives outside has a new litter of kittens, all of which scatter for a hiding place when someone walks by.

In addition to the usual chickens, geese and ducks one might expect to find on a farm, Faye also has cages full of colorful parakeets, cockatiels and doves. The chatter of birdsong as one passes the cages provides a pleasant musical background on a tour of the backyard. Other cages nearby house fluffy rabbits. Then there are a few pot-bellied pigs, lounging in the dirt and grunting now and then but not bothering to move very far even when a stranger approaches their pen.

"I don't have very many animals," Faye says. Then, hesitantly, she continues. "Well, some people might think I do. I don't think I have too many."

She has always loved animals and takes great pleasure in caring for them. She says she doesn't eat any of her animals, not even the eggs from her birds. They are sort of members of her family, but she doesn't name any of them other than the dogs and cats. Even when she worked outside the home, she chose employment that allowed her to be around "critters." She worked for 20 years at Peterson Industries, where her job was to care for chickens and gather eggs in the chicken houses.

Faye has lived on the farm more than 50 years. She is a Gravette native, the daughter of Cecil and Juanita Smith, and has lived in Gravette all her life. She lived in town until she married, at age 15, and moved to a farm south of town. She lived there seven or eight years until she and her first husband, Olen Dyer, moved to the current home. She said they sometimes put out three different gardens in the early years.

Faye met her present husband, Al Blair, just a few months after Olen died. They have been married 25 years. Al is a locksmith, owner of Al's Locks in Gravette, and does tax preparation for H&R Block during the tax season. Faye says he indulges her and allows her to keep all the animals she wants but he isn't interested in helping her with them. She cares for all of them herself. She did admit he is pretty good in the kitchen and, in fact, he was preparing a batch of angel biscuits during a recent visit.

Gardening has been another of Faye's interests, but she says she didn't put out a garden this year since she's had a few health problems in recent months. She still loves her flowers, though, and plants throughout her house and yard show evidence of her green thumb. She doesn't have much formal education, she admits, since she dropped out of school to get married just after completing the eighth grade. However, she enjoys reading and she has educated herself on a wide variety of subjects through the pages of books.

A notable feature of Faye's home is her "chicken room," an entire room filled with chickens. She has an extensive collection of chickens, accumulated over several years of collecting. The room is decorated entirely in chickens. A couple of walls feature 10 shelves, floor to ceiling, filled with chickens in all materials. There are cloth chickens, wooden chickens, ceramic chickens, glass chickens, metal chickens. The other two walls are covered in chicken art, with paintings and plaques featuring her feathered friends. The floor is lined with chicken figurines and planters shaped like chickens. There are so many that some have overflowed into the adjoining living room where they occupy shelves around the TV set.

She wouldn't attempt to guess how many there were in her collection but said, "Well, after all, I've had a lot of years to work on it."