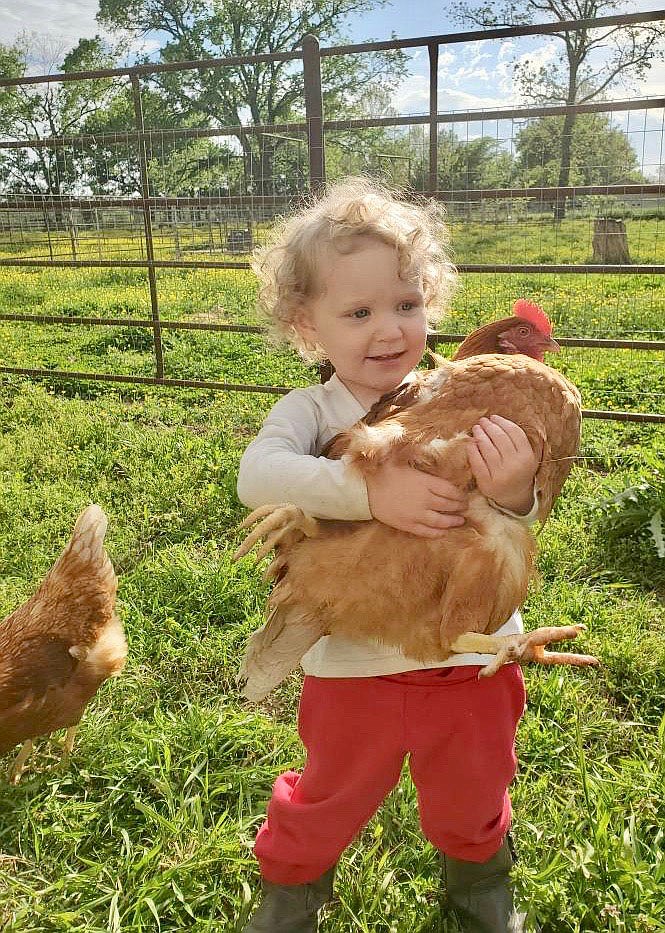 Submitted Photo/BETH PATTON Little Izabella Jean Patton, two years old, hugs a big red hen on her family's farm at Maysville. Her father, Michael, and grandparents, Jack and Beth Patton, are regular farmers' market vendors. The smile on her face shows how much she loves being a farm girl.

GRAVETTE -- Jack and Beth Patton, owners of Patton Family Farms in Maysville, raise a variety of produce for sale at the Gravette Farmers Market. They are one of the regular vendors, with their booth set up each Saturday offering homegrown veggies, garden plants and flowers, eggs, farm-raised beef and pork products.

Jack was raised on a farm in Decatur and graduated from Decatur High School. Beth is from Gentry. The couple was married in 1992.

The Pattons bought their 32-acre farm, the former Luther Tucker farm, in 1993 to raise kids, grow a garden and butcher their own meat. Both worked off the farm but enjoyed spending time in the garden and raising a wide variety of produce. Their gardens flourished and they began taking their extra produce to the farmers market in Gravette when it was first established in 2007.

"People loved the produce. We grew bigger gardens every year," Beth said. "The people that bought our veggies wanted to try our meat. So we started taking our animals to a USDA butcher and selling our pork and beef off the farm and at the market."

The Pattons grow new potatoes, beets, green beans, squash, tomatoes, onions, peppers, a variety of greens and other veggies. In addition to helping with all the vegetables and meat they produce, Beth stays busy in the kitchen and often brings home-baked breads, jams and jellies to the market.

Family members man their booth and sell their products at the farmers market during its regular hours each Saturday from 8 a.m. to 1 p.m. and also sell products off their farm during the week. Customers wishing to make an appointment to visit the farm during the week can call 479-291-4445 or 479-787-3313.

The Pattons bought an additional 50 acres that adjoined their farm in 2010. The farming operation began to take so much of their time that the Pattons both now work full-time on the farm. They also volunteer as co-managers at the market.

They are parents of four children. They have eight grandchildren and another is expected in November. Four years ago, their youngest son, Michael Croasdell Patton, bought the farm next to theirs and now raises pigs and chickens. He helps Jack and Beth at the market and is also planting his own garden this year. He married in 2017 and has a two-year-old daughter, Izabella Jean, who already loves being a farm girl.