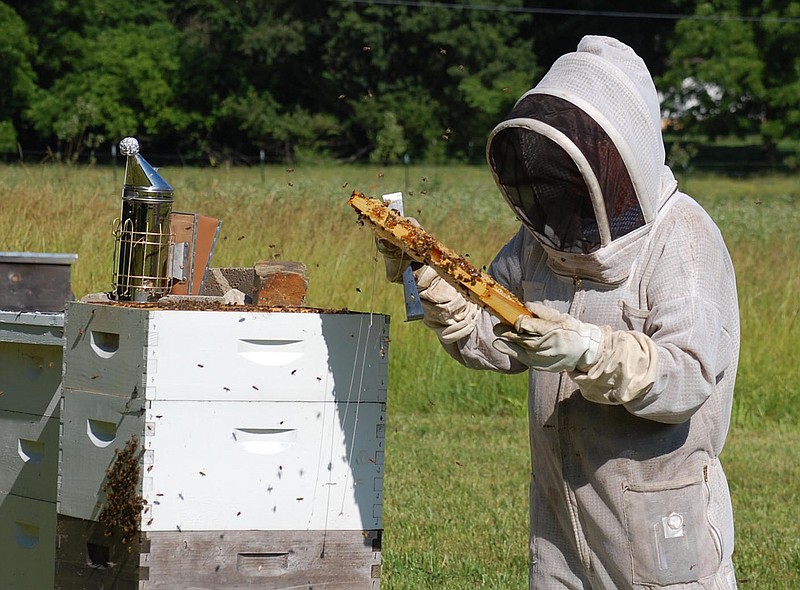 Janelle Jessen/Herald-Leader Lynn Paskiewicz checks the bees in one of her hives.

Lynn Paskiewicz enjoys every part of keeping bees, from checking the hives to harvesting honey.

She has been keeping bees at her home between Siloam Springs and Gentry for the past nine years. She began with a few hives behind her shed the first year, then purchased property behind her barn in a big field.

Paskiewicz, who retired from her position of Southside Elementary School librarian last year, said she isn't sure why she wanted to start keeping bees; it's just something she decided to do.

Over the years, Paskiewicz has had as many as 19 hives at one time -- during a year when her bees were swarming. Currently, she has eight working hives.

Paskiewicz likes walking down the hill, through the woods to the field to check her bees and looks for heart-shaped rocks along the way. She is fascinated by watching their habits, she said. She has also learned a lot from her mentor, Shannon Ivy of Pea Ridge, and from the Northwest Arkansas Beekeeping Alliance, she said.

When Paskiewicz worked as a librarian, she shared her love for bees with her students and taught a unit about bees each year, she said.

Depending on the time of year, Paskiewicz' bees bring back different colors of pollen, ranging from yellow-orange to deep magenta. Since the bees can fly up to six miles to find pollen, she wonders from where they are coming and going, she said. The various colors of pollen mean the honey produced in the summer is often a light golden brown while the honey produced later in the fall is a deeper color, she said.

The bees keep their hive 90 degrees inside year-round and seal everything off with wax, she said.

"They do so much without any help from us," she said.

Each hive can have more than 40,000 bees and they are all female, except for the drones. Paskiewicz uses a protective mesh suit to work with her bees and only sometimes has to use smoke to calm them. Bees' temperaments are affected by the weather and they can become more agitated by a low, or low-pressure system, she said.

When bees are alerted, they put out a scent that smells something like an overripe banana to alert the rest of the hive, she said. She estimated she has only been stung 10 times in the past nine years.

Paskiewicz and her husband Dan have seven special-needs children, five of whom still live at home, and harvesting the honey is a family affair, she said. She brings the frames up to the house and hands them through the screen door to her husband while her daughter El'Drea counts them. El'Drea especially likes to hear the sound of honey squishing out of the frames, she said. The honey is filtered several times before being bottled, she said.

Paskiewicz sells her honey at Occasions Gifts and to friends through word-of-mouth, she said. Many of her customers purchase her local honey to help with their allergies, she said. Recently she has also started making soap using her honey, she said.

Keeping bees isn't Paskiewicz's only hobby; she has won bronze medals in the Masters World Weightlifting Championship in 2018 and 2019. Lifting weights and doing CrossFit not only help her care for her special needs children but also help her lift the heavy hive boxes, she said. 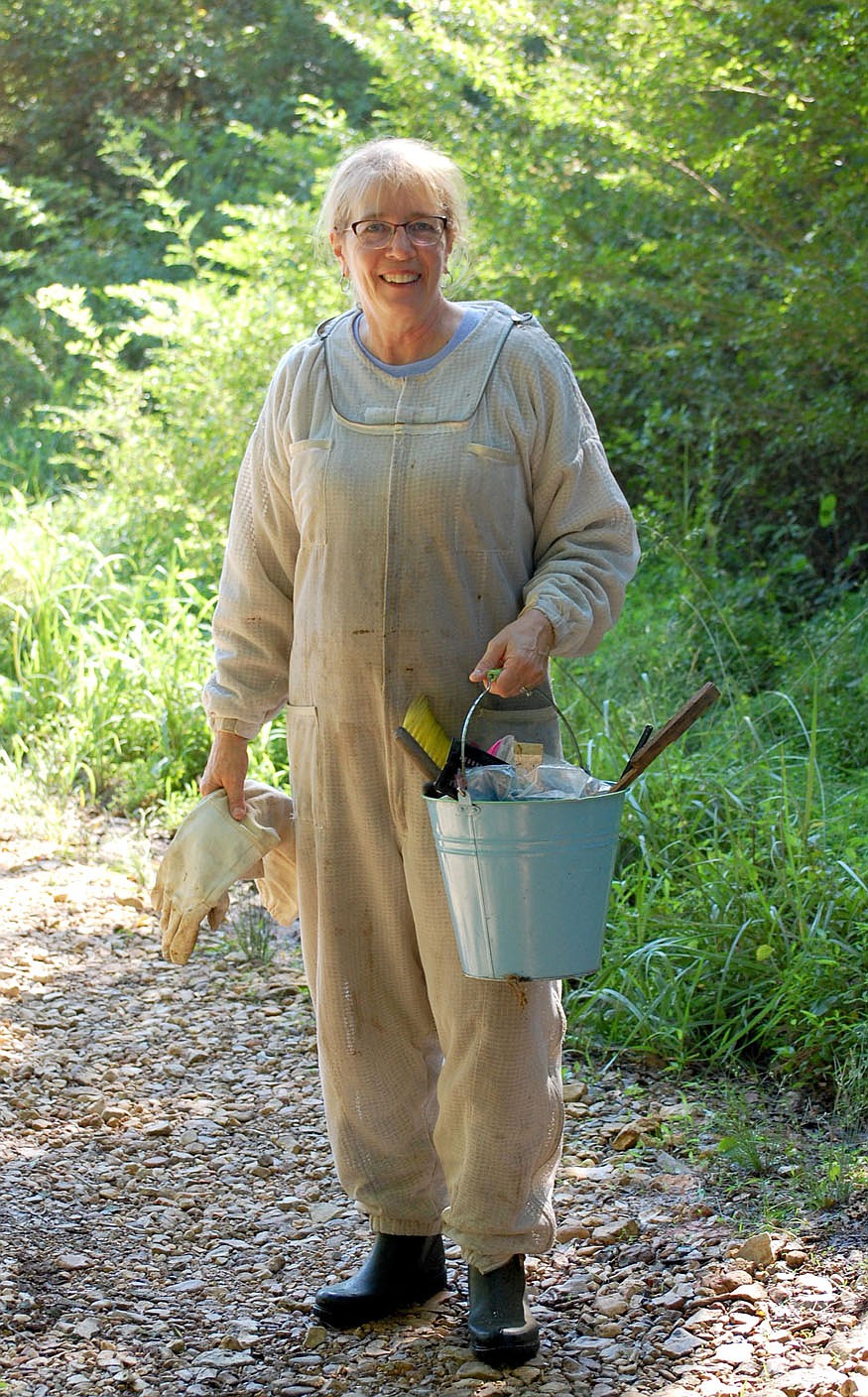 Janelle Jessen/Herald-Leader Lynn Paskiewicz walks down the hill to the meadow to care for her bees. 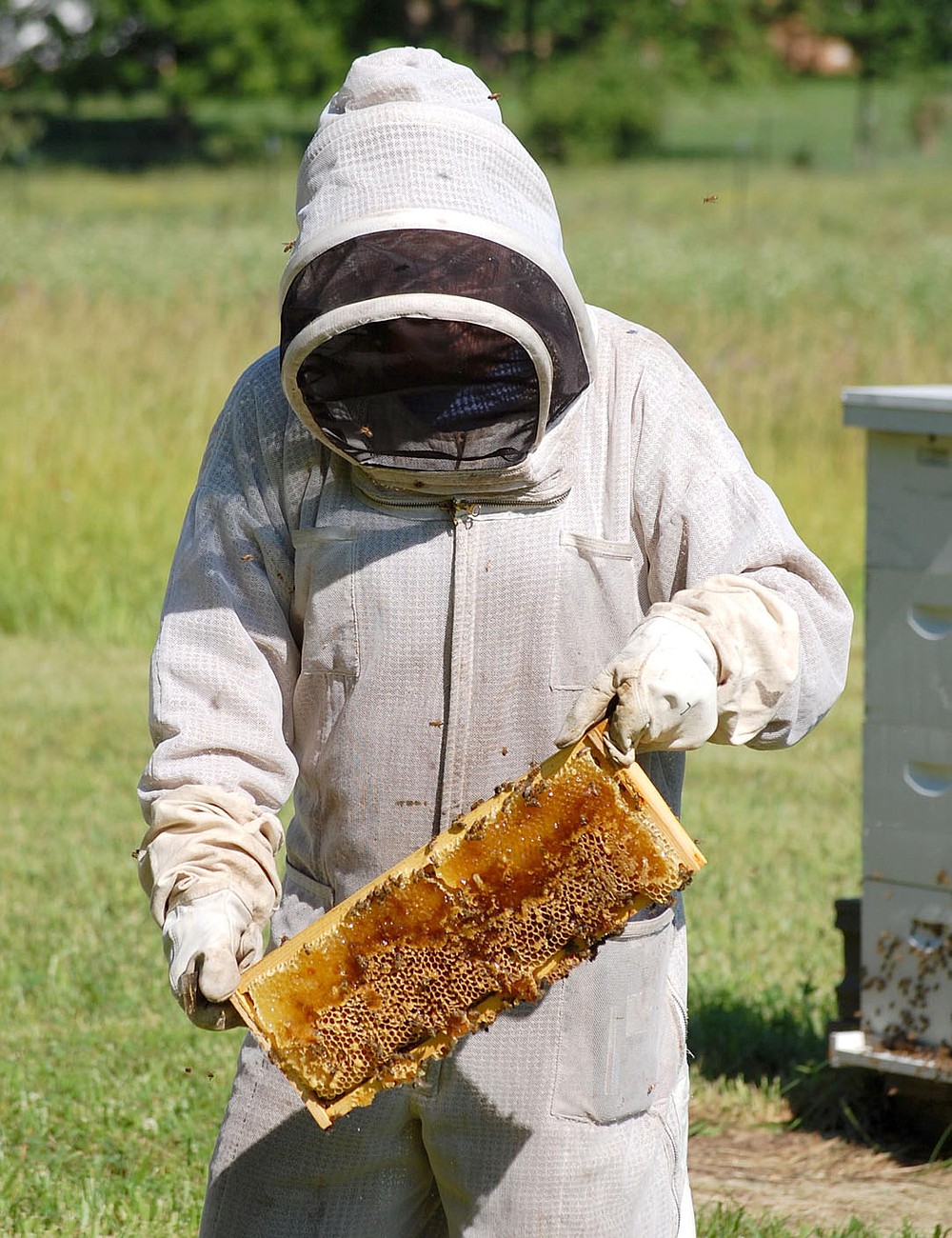 Janelle Jessen/Herald-Leader Lynn Paskiewicz holds a frame from one of her hives. 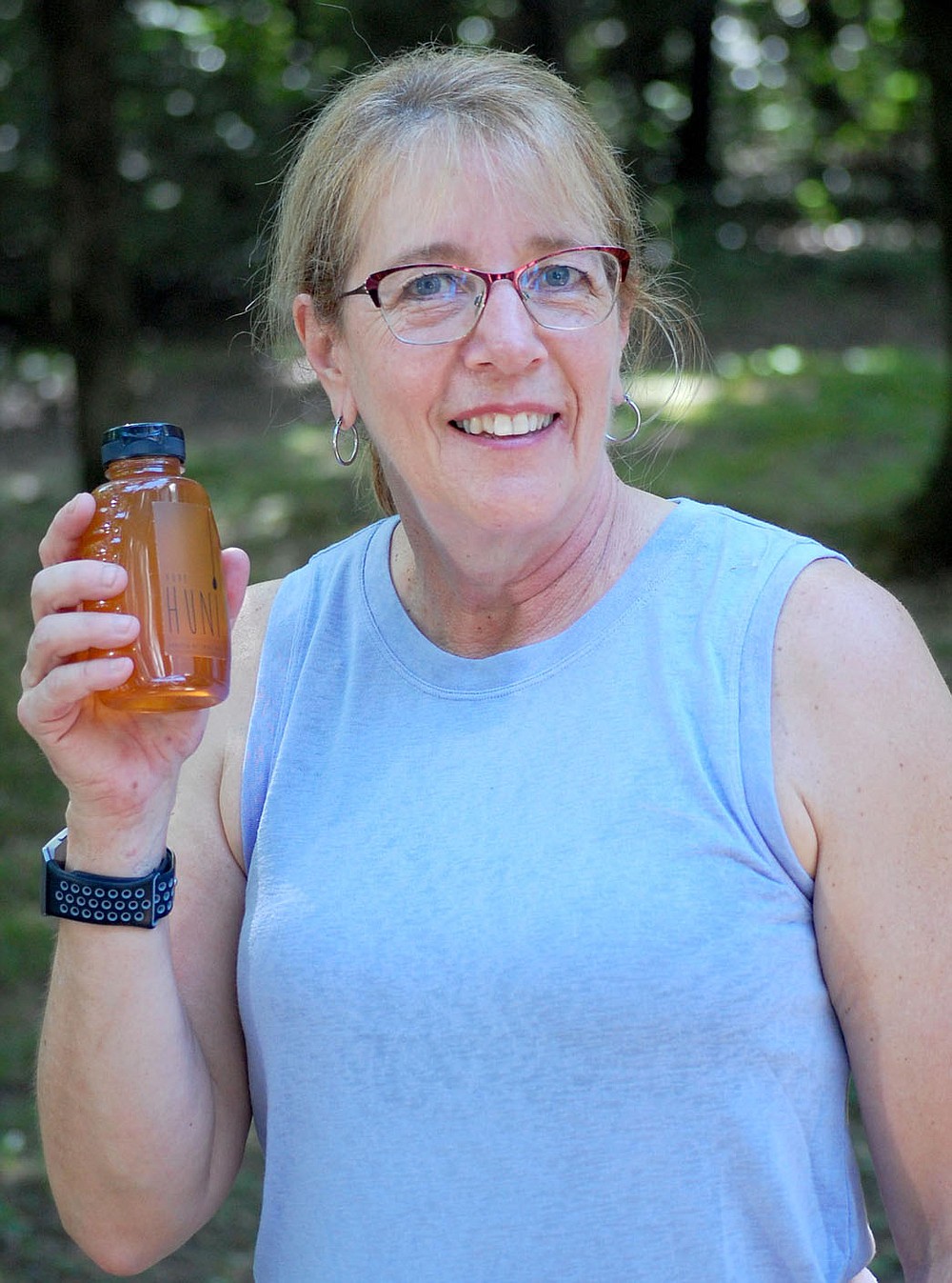 Janelle Jessen/Herald-Leader Lynn Paskiewicz holds a bottle of honey from her bees.