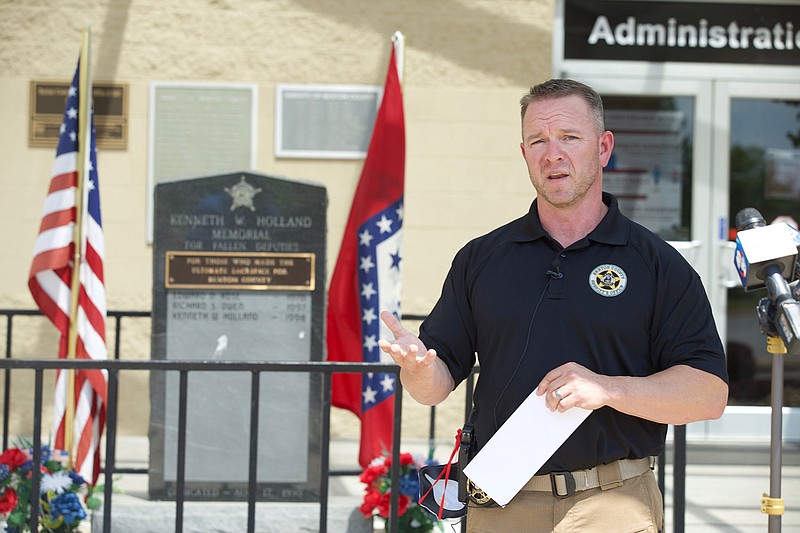 "I apologize to the court," Holloway said Thursday morning. "Our intent was to protect the inmates and our employees."

Holloway said it was his responsibility a policy was put in place by his command staff in response to the covid-19 pandemic.

Circuit Judge Robin Green issued summons in five cases for Holloway to appear in her court after the five people weren't put in jail even though there were warrants for their arrests.

The email was sent by Capt. Andy Lee at the direction of Chief Deputy Meyer Gilbert, Robinson said. Holloway wasn't copied on the email, Robinson said.

Robinson said the Prosecutor's Office became aware of the policy and told multiple people at the Sheriff's Office the policy didn't comply with state law. Holloway was eventually contacted and he agreed, Robinson said.

Robinson said Holloway was unaware the wrong policy had been implemented and it was corrected May 26 after Green summoned Holloway to appear in court.

Robinson said the jail didn't check to confirm in-state non-felony warrants for 36 people, but 13 of the individuals were later arrested on the warrants.

Some police officers began to ask her when they could resume making felony arrests, Green said.

Green said she later issued an arrest warrant for Alfredo Arroyo and was asked to expedite it because law enforcement was concerned about his role in a drive-by shooting. Green said she was then notified the jail refused to accept Arroyo.

"It was extremely troubling in terms of prosecuting criminal cases," Green said.

She said jailers weren't only violating their sworn oaths, but also stripping other law enforcement officers of their authority.

"That policy was extremely problematic and causing problems for the entire justice system in the county," she said.

Robinson and Bentonville lawyer Shane Wilkinson, who represents Holloway, said they talked with chiefs of local law enforcement agencies and the issue was resolved.

Wilkinson said the Sheriff's Office was cooperative in resolving the issue.

Green said she appreciated Robinson and Wilkinson confirmed the policy had been corrected.

"I couldn't imagine that you were on board with this policy," Green told Holloway.

"The sheriff wasn't held in contempt because it was simply a mistake," Wilkinson said. "A mistake made trying to protect the inmate population, the deputies at the Sheriff's Office, and the public. Contempt has to be willful and there has never been one shred of evidence that he did anything willful."

There were 369 prisoners in the jail Thursday.

The summons for Sheriff Shawn Holloway were issued in five cases.

• Alfredo Arroyo was turned away from the Benton County Jail on May 22 and was arrested by local and federal authorities at the probation office in Rogers and questioned by Bentonville police about his possible involvement in a shooting. He was re-arrested on May 23 after the Sheriff’s Office was notified and Arroyo committed on new offenses in the intervening period.

• Carlos Alvarado’s warrant was run and not confirmed on April 22. He was arrested on the same warrant on May 22 and he committed no criminal offenses between April 22 to May 2 and remains in custody.

• Kendall Shelly’s warrant was run and not confirmed on May 24 and he was arrested again on May 28. Shelley committed no new offenses between May 24 to May 28.

• Robert Blau’s warrant was run and not confirmed on April 27. He was later arrested on June 12 and he committed no new offenses between April 27 to June 12.

• Dustin Ray’s warrant was originally run and not confirmed on April 19. He was later arrested by Washington County Sheriff’s Office on May 19 for robbery.