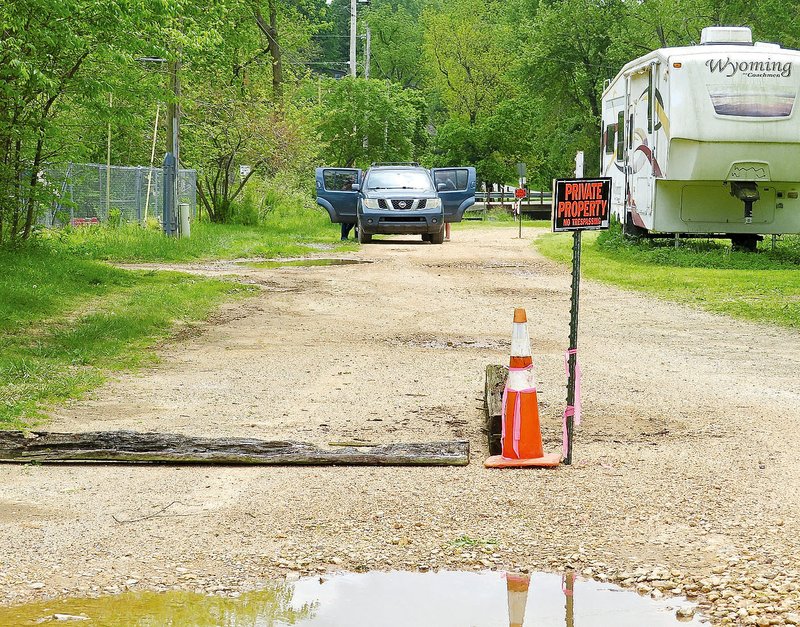 Westside Eagle Observer/RANDY MOLL FILE PHOTO Conflict rages in Springtown over this little street. The city challenged the legitimacy of previous council action in 2014 to narrow the street from 60 feet to 20 feet in an effort to open the street as an extension of Bredehoeft Road to the Don Earley Memorial Bridge on Aubrey Long Road so that traffic on a portion of Aubrey Long Road which passes a residence located on a big spring there can be reduced or stopped to protect the spring. Residents on either side of the narrowed street had marked their property lines with signs and barricades to prevent those attempting to use the street from driving across their properties.

SPRINGTOWN -- Arkansas Court of Appeals, on March 11, reversed a decision of the circuit court and determined that a 2014 ordinance passed by the Springtown Council was not passed in accordance with Arkansas law and therefore is void.

The Court of Appeals, in Case No. CV-19-398, ruled that the votes of three council members to suspend the rules and pass the ordinance on three readings with a single vote did not meet the statutory requirement of the votes of 2/3 of the elected council since the council was made up of five members and it would take the affirmative votes of four members to achieve the 2/3 majority required in the statute.

A petition filed in circuit court by the town of Springtown in October 2017 requesting a declaratory judgment to void a 2014 town council ordinance which narrowed an "unplatted" 60-foot-wide street to 20 feet was denied on Nov. 11, 2018, but was appealed by the town council, according to court documents.

At issue is the width of a former street between Bredehoeft Road and Flint Creek, near the Don Earley Memorial Bridge on

Aubrey Long Road. The unused street was narrowed by the town council in 2014, giving to adjacent landowners Michael Evans, Lisa Taylor and Paul Lemke the land vacated by the town.

The council in place in 2017 was seeking to reopen the street as a continuation of Bredehoeft Road and reroute traffic from Bredehoeft and Aubrey Long Roads there rather than on the current Aubrey Long Road which passes by the home and big spring on property owned by Preston and Karee Barrett.

The petition alleged that the 2014 ordinance should be declared void and the 20 feet on each side of the former Bredehoeft Road be restored to the city because the passing of the ordinance was not done according to Arkansas Code.

In his ruling on Nov. 11, 2018, Judge John Scott said the previous council had lawfully passed the ordinance and he denied the town's motion to void the 2014 council action.

The town filed a petition, which was not granted, to reconsider the denial on Dec. 19, 2018, using case law based on a Van Hovenburg v. Holeman decision and then filed an appeal.

The reopening of this spur of Bredehoeft Road and associated changes remain controversial and relate to a years-old dispute over the location of the Aubrey Long Bridge. When the bridge was planned in 2012, Karee and Preston Barrett objected to its location near a natural spring on their property. After the bridge was completed, the Barretts blamed associated county road work for causing sinkholes on their property.

The town's council, following a change in its makeup, embarked on a plan to take back roadways previously abandoned by Springtown and reroute traffic from the bridge away from the Barrett property.

In the opinion delivered by the Court of Appeals on March 11, it states: "Based on the holding in Newbold, Springtown Ordinance No. 2014-03 had to be read on three separate days unless two-thirds of the elected members of the council voted to dispense with the rule. The Springtown town council consisted of five members in October 2014; thus, four members' votes were needed to properly dispense with the reading requirement for the ordinance. Only three members voted, as the other two abstained due to a conflict and were incompetent to vote on the matter. Three votes were not enough to pass the ordinance after a single reading. Therefore, we hold that the passage of Springtown Ordinance No. 2014-03 was in direct violation of Arkansas Code Annotated section 14-55-202, and as a result, it is void. The circuit court erred by denying Springtown's motion for summary judgment. Accordingly, we reverse and remand with directions to grant Springtown's summary-judgment motion. Because we are reversing and remanding, we need not address Springtown's argument concerning its motion for reconsideration."