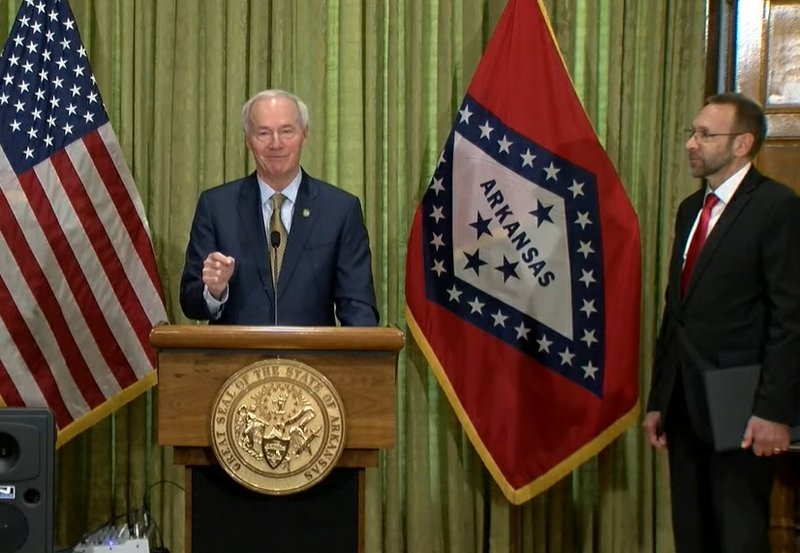 The department had already recommended no large gatherings, but the forthcoming directive will carry the power of law.

Hutchinson said he hopes Arkansans will take social distancing seriously and that those precautions, combined with the directive, will keep the state from needing a shelter-in-place order.

The number of known positive cases of covid-19 in Arkansas was 280 on Wednesday afternoon.

He said 12 people are hospitalized with the illness, including four on ventilators. Eleven have recovered.

Smith said Wednesday a new case of the illness is tied to a fourth nursing home. Three nursing homes were previously known to have outbreaks of covid-19.

[Video not showing up above? Click here to watch » https://www.youtube.com/watch?v=SDIxE8kLGes]

The new case at the fourth nursing home, Waters of White Hall, is connected to the first case of the virus confirmed in Arkansas, at Jefferson Regional Medical Center in Pine Bluff, Smith said.

Smith said at Apple Creek Health and Rehab, previously known to have one case, and The Villages of General Baptist West, known to have two cases, no additional positive cases have been identified.

Additional cases have been found at Briarwood Nursing and Rehabilitation in Little Rock, bringing the facility's total to 37 residents and 10 staff. He said testing is ongoing at the affected care facilities.

At the same news conference, Hutchinson released figures on the number of Arkansans who have applied for unemployment benefits.

Last week about 9,400 people applied, he said, and so far this week, 8,700 additional people have applied. Hutchinson said he did not have numbers on hand going back further than last week.

The large volume of applicants has caused long hold times for those filing via phone, Hutchinson said, and the state is working to update its online system for web applicants.

“I urge those that are filing to be patient, as I know you have been,” Hutchinson said. “This volume of claims is unprecedented in our history.”

Hutchinson and Smith also spoke Wednesday of plans for ensuring an adequate number of health care workers as the outbreak is expected to worsen.

Because there will likely be more patients and because some health care workers may become sick or need to care for family, Hutchinson said the state has approved emergency licensing of intern physicians with one year of residency experience.

The processing of nursing applications has also been expedited, he said.

Smith added the state may at some point need to turn to volunteers in the health care system, who can perform actions that don’t need much training.

“As we go along, it’s likely we’re going to need to figure out more efficient ways (to deliver care),” Smith said.

The new cases brought the state's total to 280.

The previous record was the 47 the state reported finding on Sunday.

Arkansas Gov. Asa Hutchinson and state health officials will hold a news briefing at 1:30 p.m. to provide an update on the virus. Check back to watch it here:

[Video not showing up above? Click here to watch » https://www.youtube.com/watch?v=SDIxE8kLGes]

The total number of confirmed coronavirus cases in the state has increased to 236, the Arkansas Department of Health reported Wednesday morning.

The total cases marked an increase by four, up from 232 on Tuesday.

No new deaths were reported on the agency's website. Officials reported on Tuesday that two people had died from the illness in Arkansas, the first coronavirus deaths announced in the state.

[Interactive Arkansas map not showing up above? Click here to see it: nwaonline.com/arvirus]

Check back for further updates.

This story was originally published at 10:27 a.m.