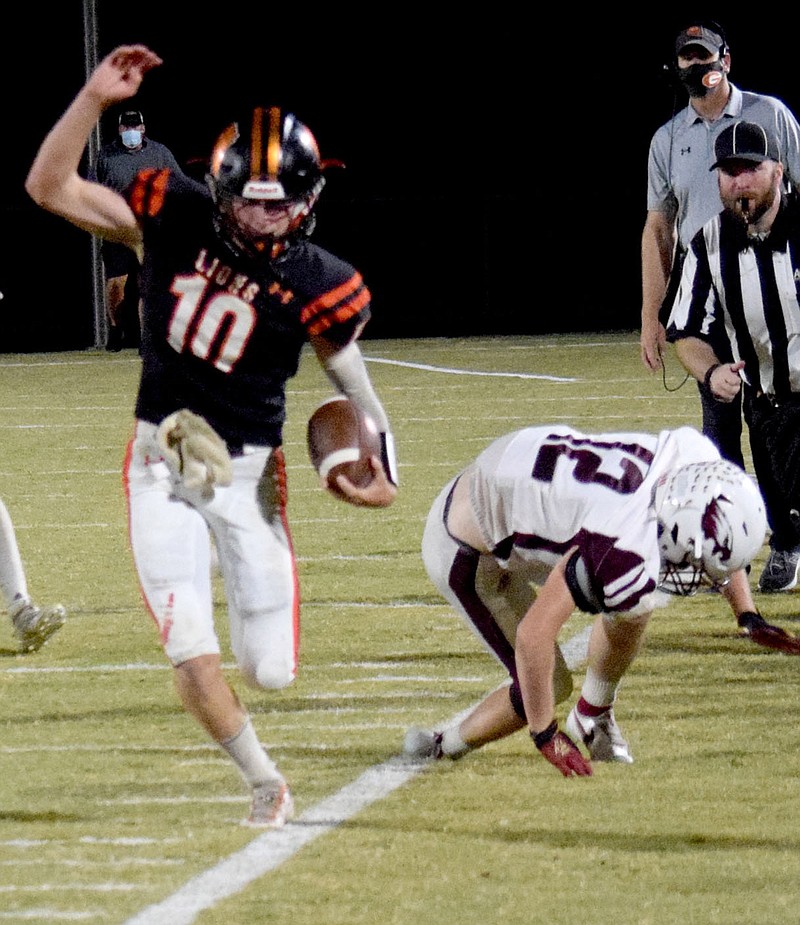 GRAVETTE -- A missed two-point conversion in the fourth quarter, coupled with a failed drive in the closing two minutes of the contest, destroyed any chances of a homecoming victory when the Gravette Lions played host to the Huntsville Eagles at Lion Stadium Friday night.

Two hours before the game, Mikey Larson was named the 2020 Gravette Lion homecoming queen during an abbreviated coronation ceremony at the 50-yard line of Lion Stadium. Larson watched the contest from the Lion marching band seats on the northeast corner of the stadium.

The Lions won the coin toss and elected to receive the ball. On their second play of the first possession, a short pass by quarterback Cy Hilger to Cordell Donnell resulted in a 55-yard touchdown run for the first score of the contest. A quarterback keeper by Hilger was good, making it an 8-0 game.

A short time later, Lane Wilkins intercepted a pass from Eagle quarterback Brooks Wiggins, giving the ball to the Lions deep in Eagle territory. But Gravette was unable to take advantage of this turn of events and the ball returned to Huntsville. A few minutes later, a handoff from Wiggins to Justin Reynolds resulted in the first touchdown for the Eagles. Huntsville kicker Christian Scott split the uprights, giving the Eagles seven points. Gravette continued to hold the lead by one, 8-7, at the end of the first quarter.

In the second quarter, Lion receiver Rhett Hilger caught a short pass from Cy Hilger at the Eagle 30 yard line and ran the ball across the corner of the goal line for six. The Lions' attempt at a conversion failed but the six allowed Gravette to extend its lead

to 14-7. A 45 yard run by Reynolds, coupled with a successful point-after kick by Scott, gave Huntsville seven points, tying the contest at 14 all going into the halftime break.

A short time after the start of the third quarter, a pass from Wiggins to Reynolds and a successful point-after by Scott gave the Eagles their first lead of the contest, 21-14. Rhett Hilger found the end zone for his second and Gravette's third touchdown of the night. Cy Hilger's conversion attempt fell short and the Lions trailed the Eagles by one at the end of the third quarter.

Rhett Hilger was able to cross the goal line for his third touchdown and the Lions were in the lead once again, 26-14. Quarterback Cy Hilger's attempt just missed the goal line by one yard and the Lions led by five. This missed conversion would come back to haunt the Lions toward the end of the contest.

Late in the fourth quarter, a handoff from Wiggins to Gus Comer plus the point-after by Scott put the Eagles back into the lead by two.

The Lions got the ball deep in their territory with a minute left. Unfortunately, Gravette was unable to move it down the field, giving the ball back with less than 30 seconds left. The Huntsville Eagles ran the clock down to zero, giving them the conference win, 28-26, over the Gravette Lions.

Gravette will travel to Berryville on Oct. 16 for a 7 p.m. contest with the Bobcats. 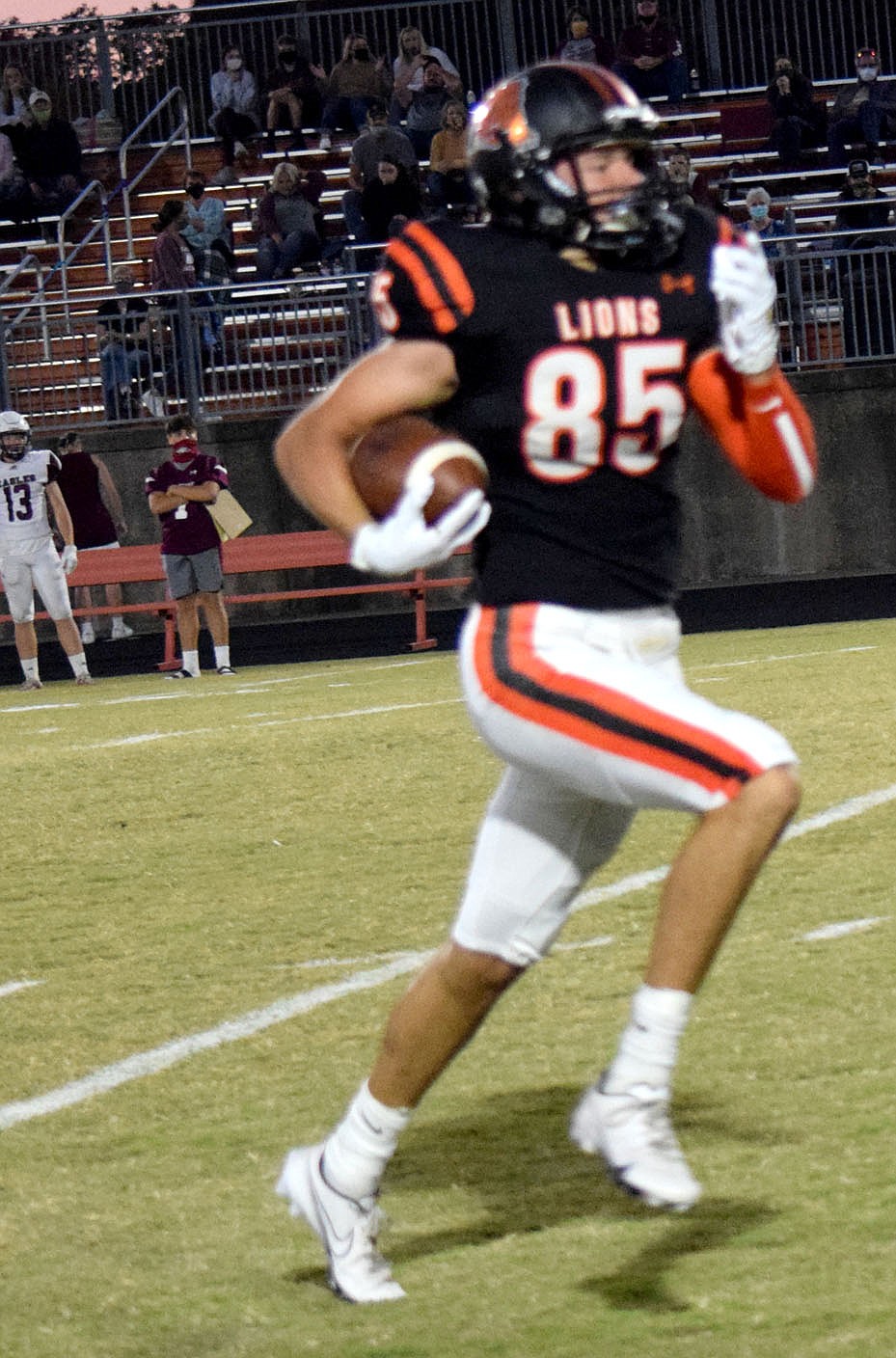 Westside Eagle Observer/MIKE ECKELS After taking a pass from Lions quarterback Cy Hilger, running back Cordell Donnell heads towards the end zone for a touchdown during the Friday night Gravette-Huntsville football contest at Lions Stadium in Gravette. 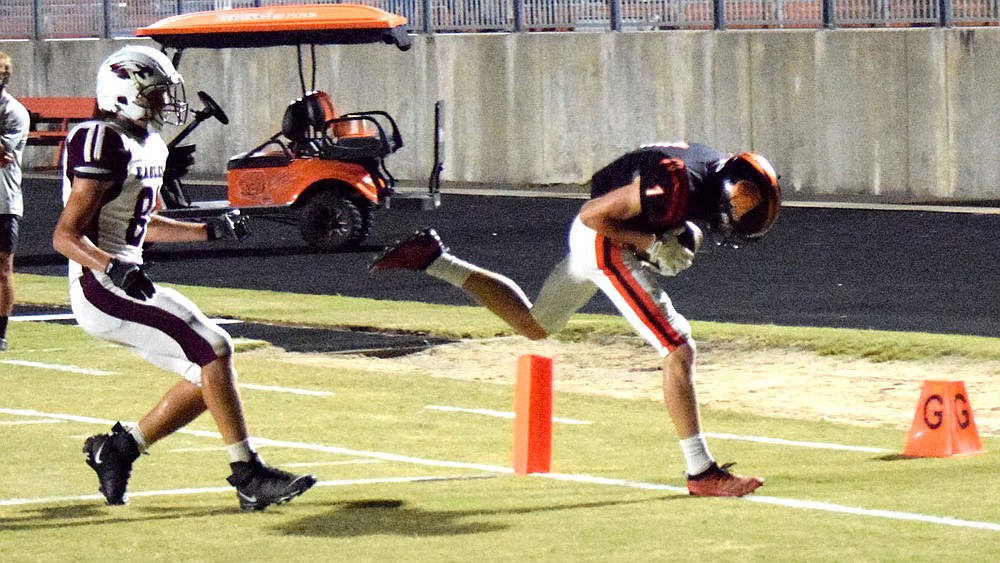 Westside Eagle Observer/MIKE ECKELS After beating out an Eagle defender, Rhett Hilger (Gravette 1) crosses the goal line before running out of bounds for the second Lions touchdown of the contest Friday night. Gravette played host to Huntsville during the 2020 Homecoming game at Lions Stadium. 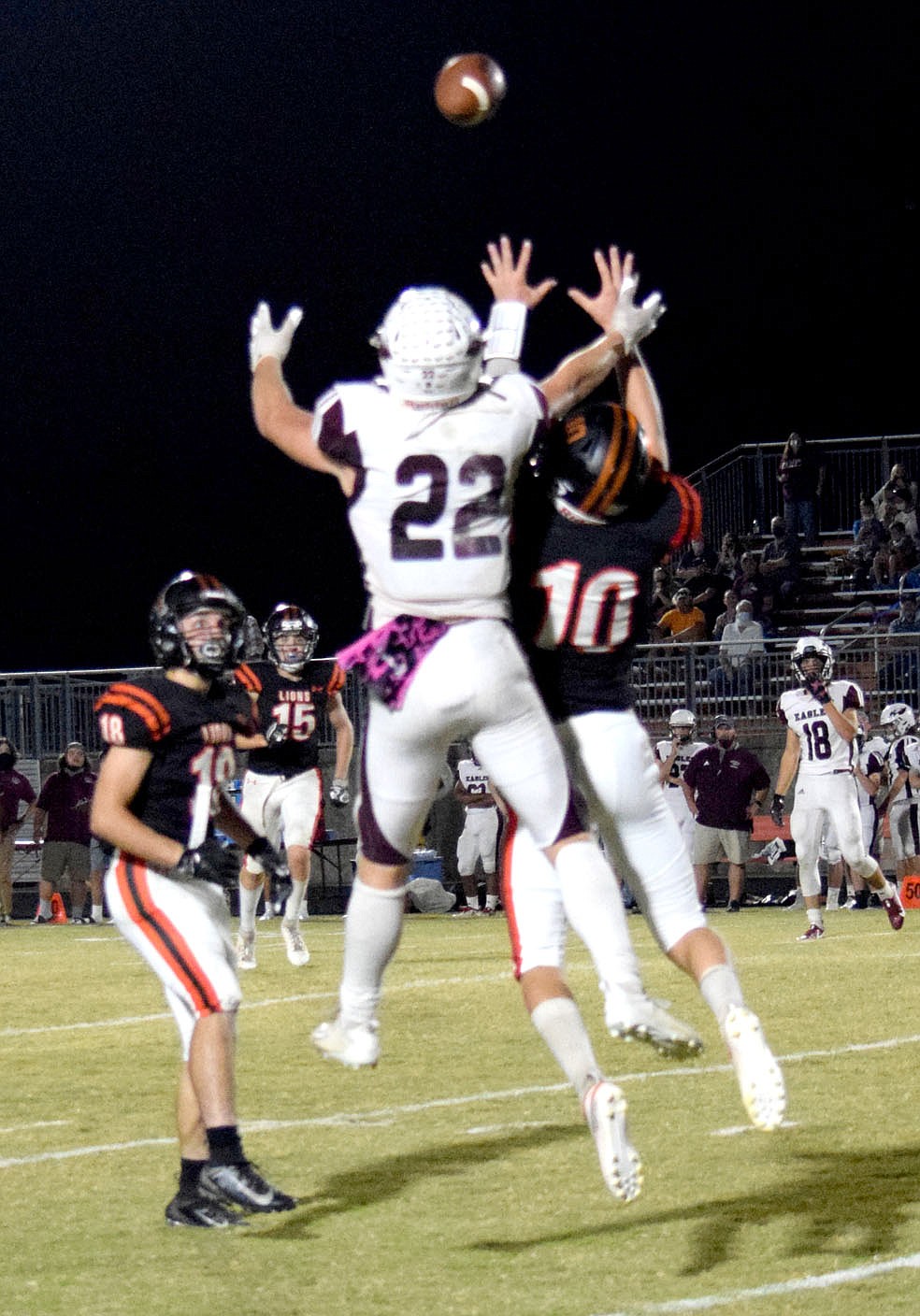 Westside Eagle Observer/MIKE ECKELS Kolton Reynolds (Eagle 22) and Cy Hilger (Lions 10) both jump up to attempt a high catch during the Gravette-Huntsville conference contest at Lions Stadium Friday night. Neither Reynolds nor Hilger came down with the catch. 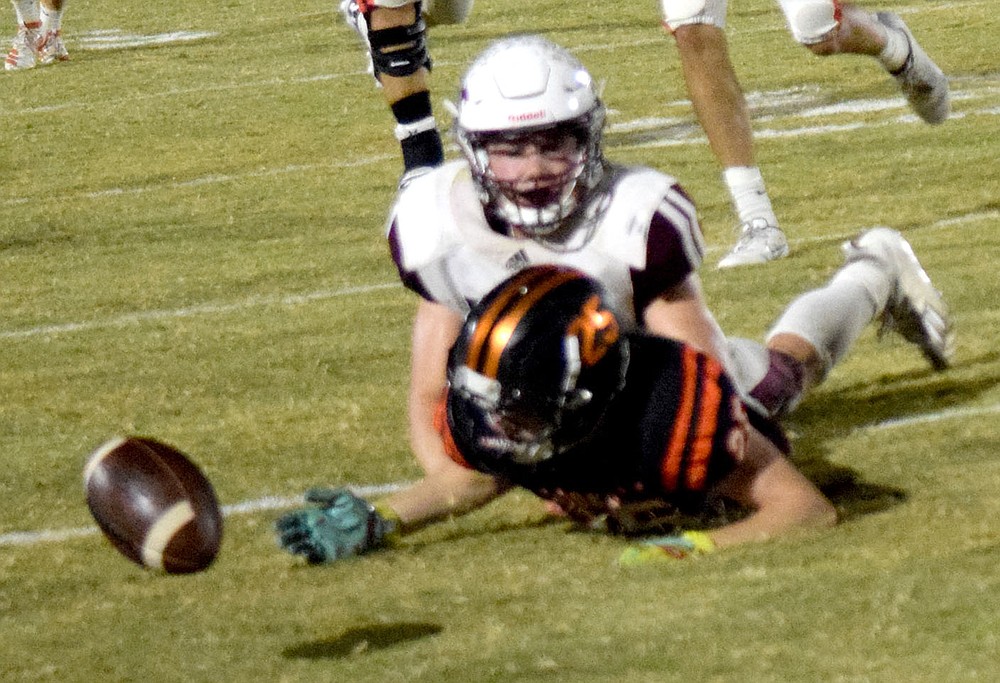 Westside Eagle Observer/MIKE ECKELS After an Eagle player makes the tackle, Mason Meeker (Lion 25) loses the ball and it rolls toward the sideline during the Gravette-Huntsville varsity football game in Gravette Friday night. Meeker caught a lucky break when the ball rolled out of bounds before anyone was able to recover it.