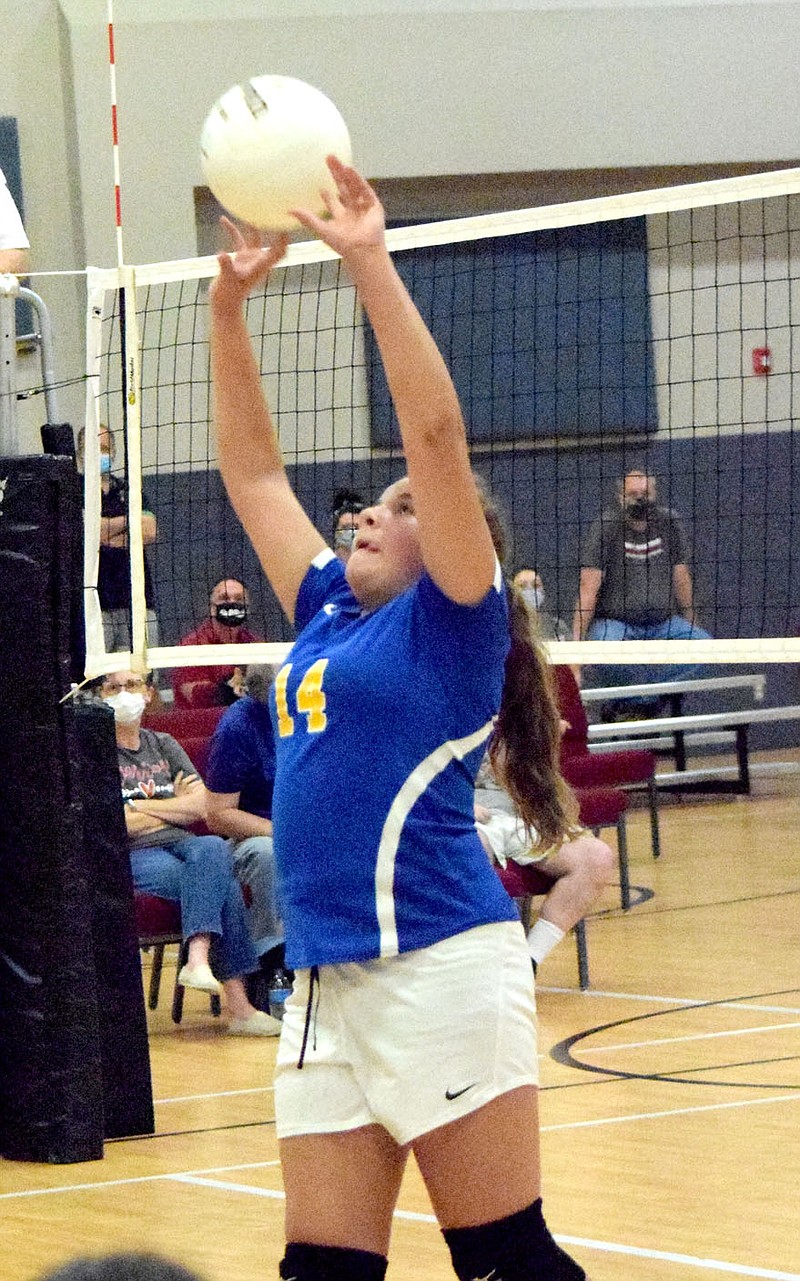 Westside Eagle Observer/MIKE ECKELS After taking a pass from one of her team mates, Lady Bulldog Annabelle Bell passes to the back field during the second set of the Life Way-Decatur volleyball match in the gym at First Baptist Church of Centerton September 1. Bell's pass eventually resulted in a point for the Lady Bulldogs.

CENTERTON -- The Decatur varsity and junior high volleyball teams ran into trouble when they squared off against the Life Way Christian Lady Warrior teams in Centerton Sept. 1. Ultimately, both teams lost to Life Way's stronger and more seasoned teams.

The season began Aug. 25 when Decatur traveled to Eureka Springs to take on the Lady Highlanders, with the varsity and junior high teams chalking up their first victories of the new season.

Unfortunately, the Decatur-Northwest Arkansas Classical Academy matches scheduled for Aug. 27 were both canceled, leaving the Lady Bulldogs a week without more match experience, until the Life Way contest.

Coach Cali Langford and assistant coach Tajhe Turner ferried both teams to the gym at First Baptist Church in Centerton for the Lady Bulldogs' second regular-season match of 2020.

The second set was almost a repeat of the first, with Life Way jumping out in front. But Decatur came together as a team and fought back with several long volleys. A hush came over the spectators as the ball passed over the net several times during one of the volleys. In the end, the ball simply got away from Decatur, and soon Life Way had won the second set, 25-10.

Life Way gained complete control of the third and final set, dominating Decatur as much as 19-3 toward the end. A series of spikes by senior Brownyn Berry rushed past several Life Way players, bringing the Lady Bulldogs briefly back into the match.

Lilly Lee was able to connect with a ball that dropped close to the net, sending it back to her teammates who delivered it back over the net into Life Way territory, giving Decatur a glimmer of hope. One play later Stephanie Sandoval was able to dig the ball back over the net for yet another Decatur point.

Finally, Annabelle Bell returned the ball from near the corner of the net for a third point. But as quickly as the momentum turned in Decatur favor, it was gone. The Lady Warriors ultimately scored six more points, taking the set, 25-10, and the match victory in straight sets.

Earlier in the afternoon, the junior high Lady Bulldogs put up a fight in their match against the Lady Warriors. In Set 1, the junior high team found itself lagging behind early and never was able to catch up. But the second and final set saw the young Lady Bulldogs making the first point of the set. Soon Decatur was holding a slim 6-2 lead.

Decatur maintained that lead until the midway point of the set when the Lady Warriors began racking up point after point and took the lead from Decatur, winning the match, 25-13, 25-17.

Decatur traveled to Mulberry on Sept. 3 to take on another conference competitor, the Lady Yellowjackets, in the second game of week three. No score was made available to the "Eagle Observer" by press time. 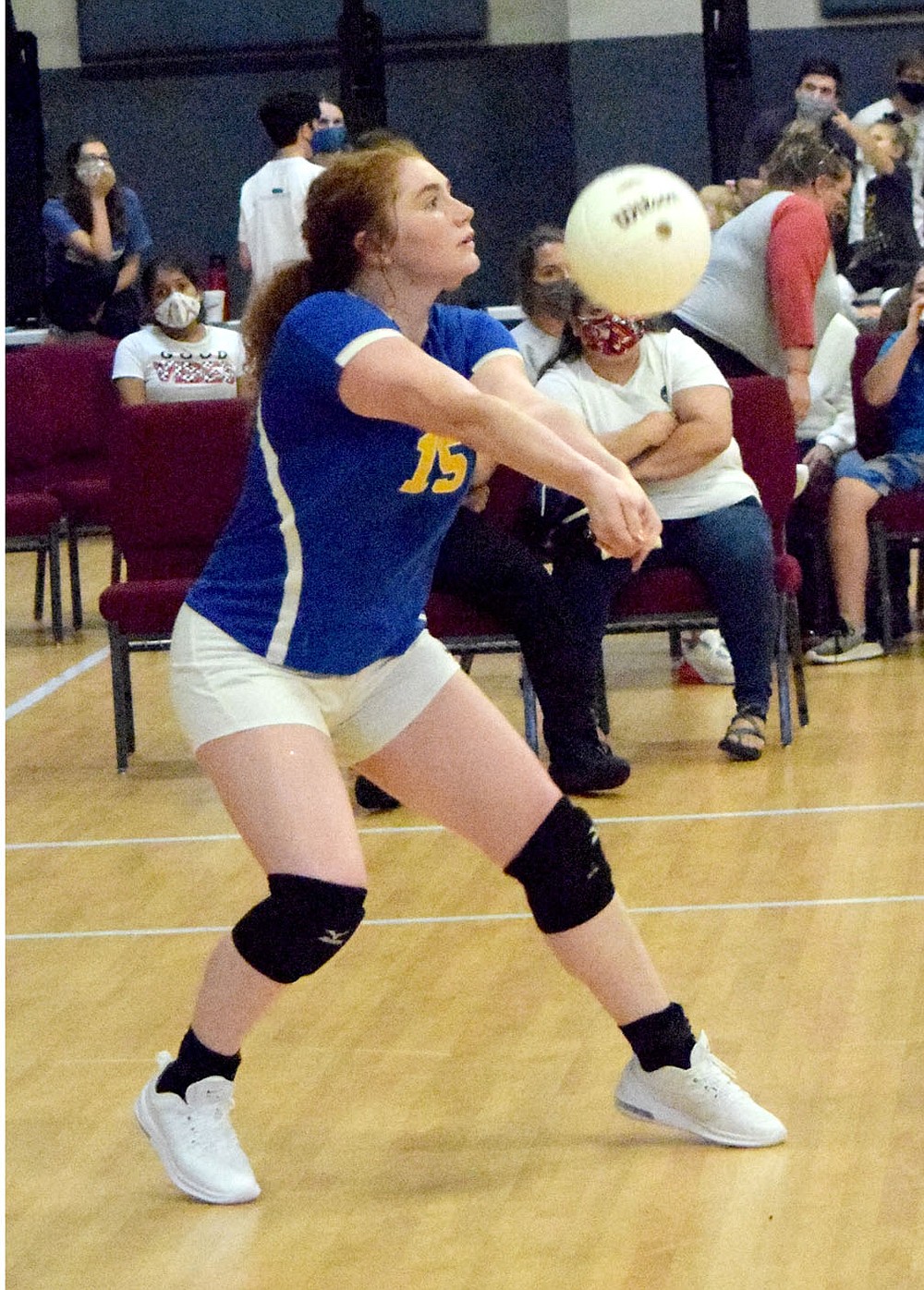 Westside Eagle Observer/MIKE ECKELS Lady Bulldog Bronwyn Berry uses a forearm pass to send the ball back over the net to the Lady Warrior side of the court during the third set of the Life Way- Decatur volleyball match in Centeron September 1. 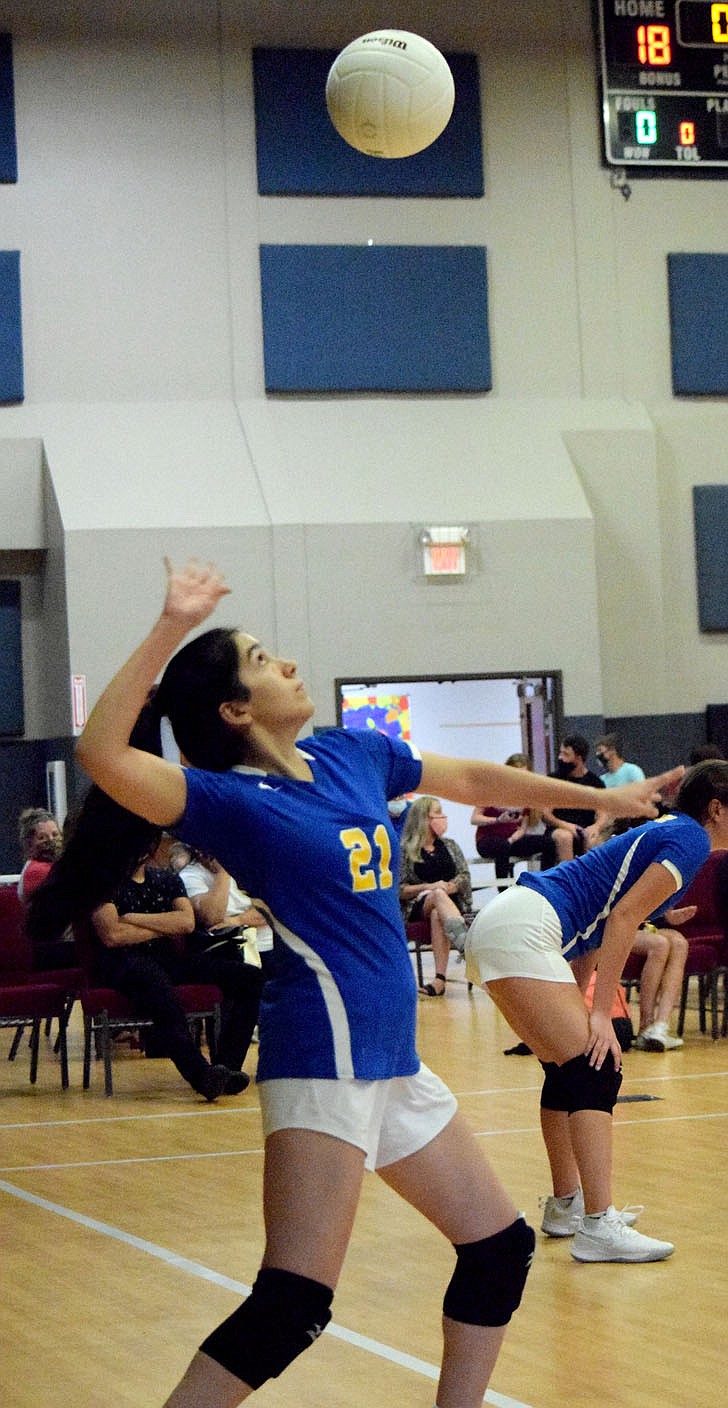 Westside Eagle Observer/MIKE ECKELS Lady Bulldog Stephanie Sandoval keeps her eye on the ball as she gets ready to serve into the Lady Warrior side of the court during the Life Way-Decatur varsity volleyball match in the Gym at First Baptist Church of Centerton September 1. Life Way Christian defeated Decatur in three straight sets to take the match. 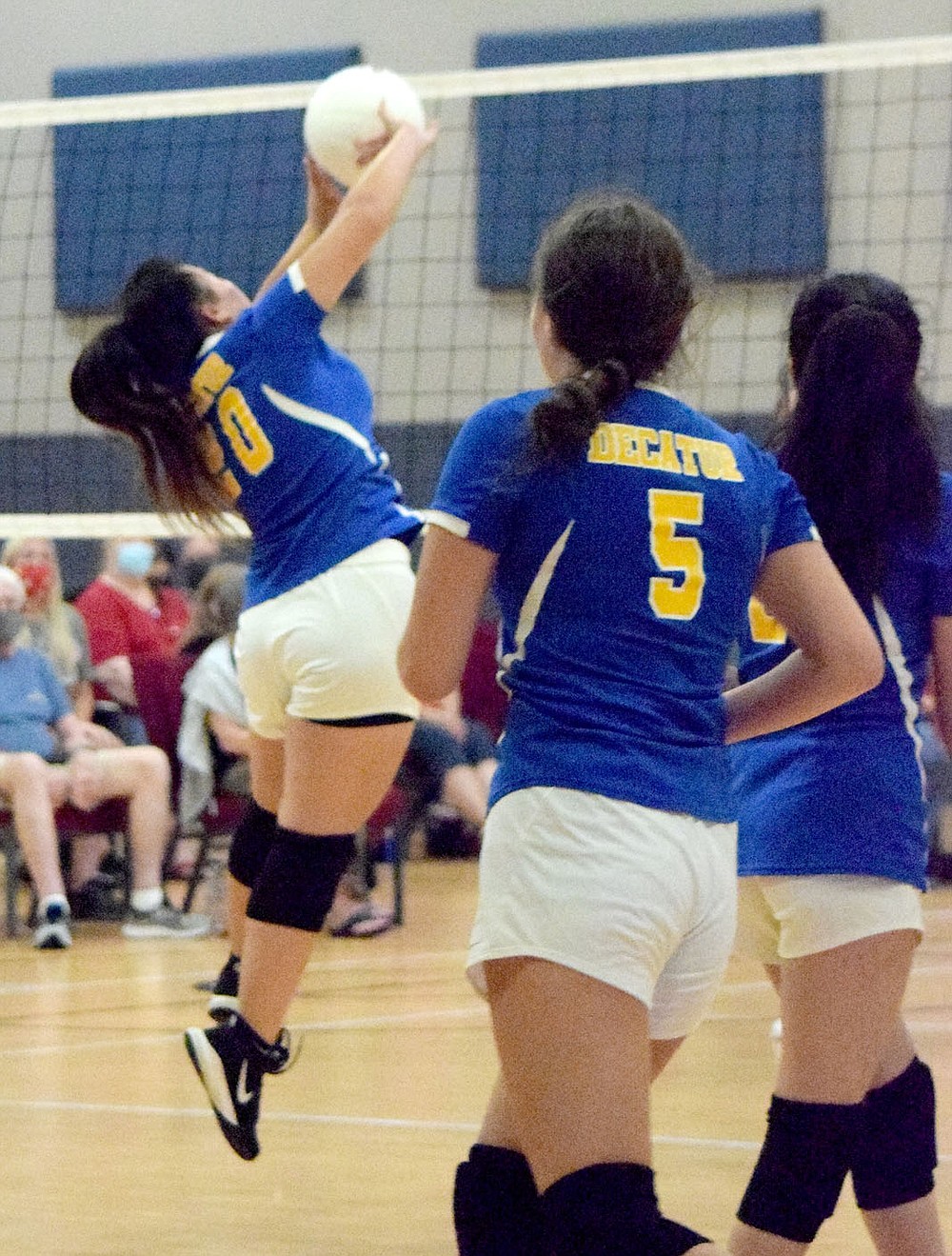 Westside Eagle Observer/MIKE ECKELS Lilly Lee (left) intercepts the ball just below the top of the net sending back into Lady Warrior territory during the September 1 Life Way-Decatur volleyball match in Centerton. Lee's pass was picked up by a Lady Warrior and dropped back into the Lady Bulldogs side for a point. 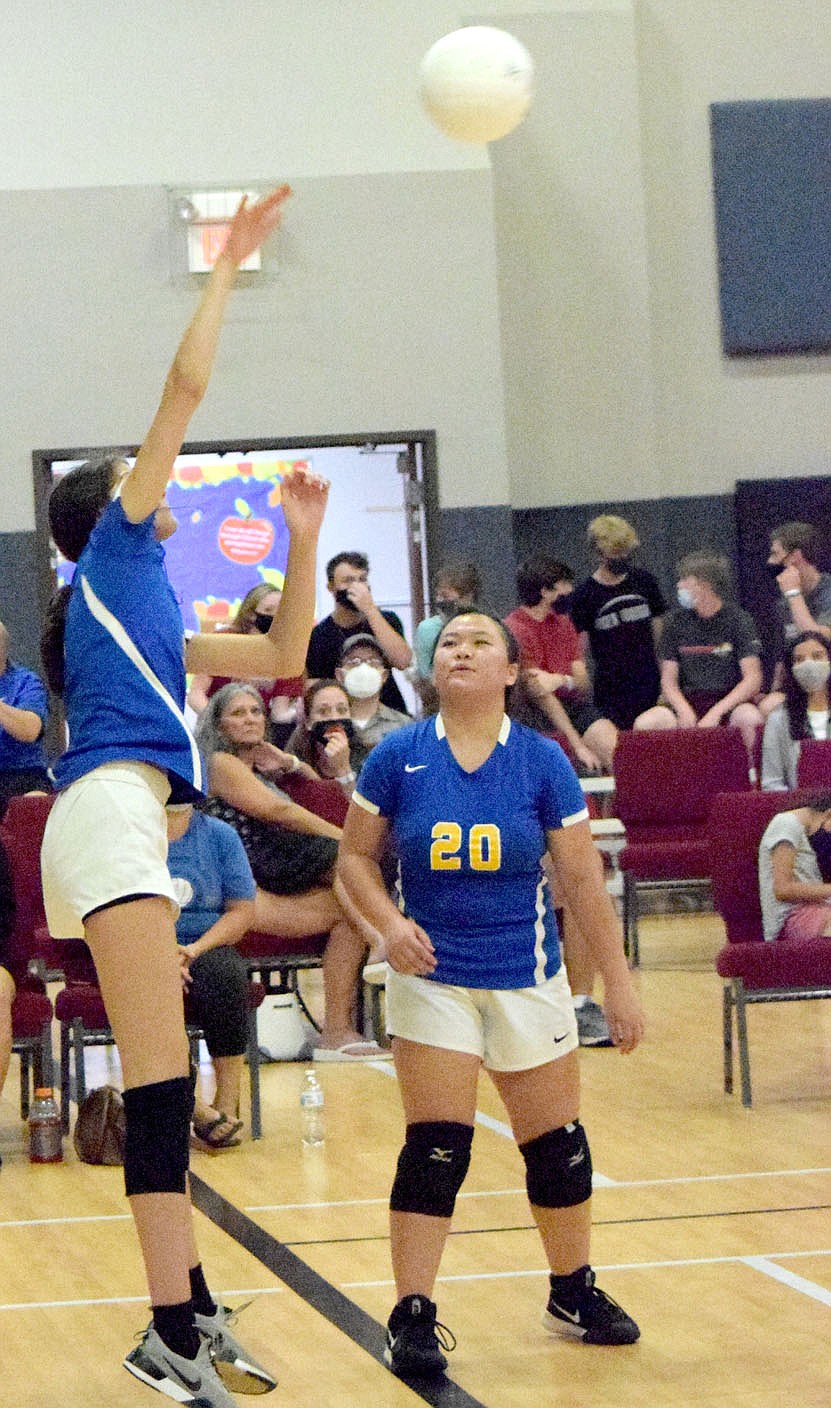 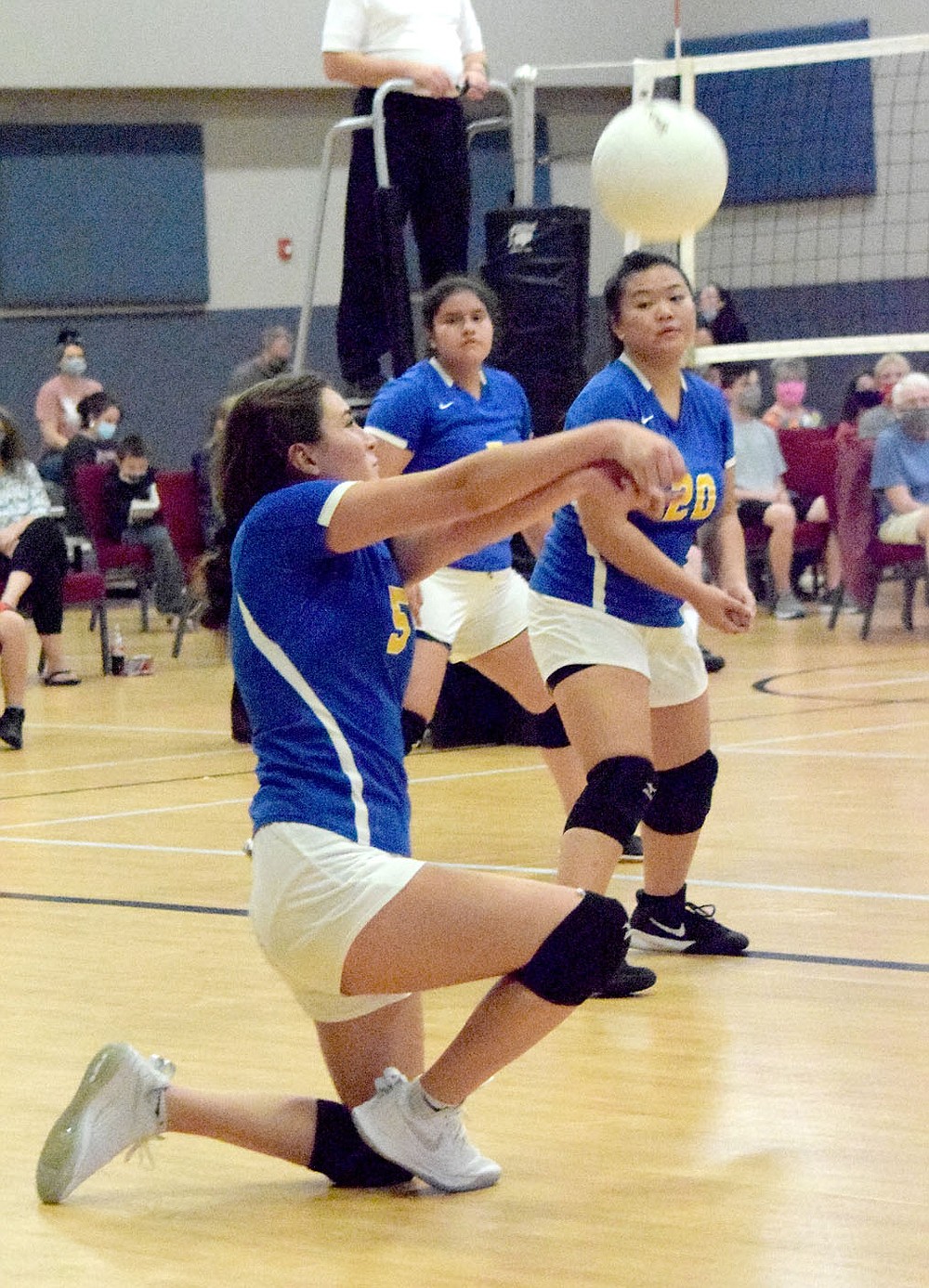 Westside Eagle Observer/MIKE ECKELS Aaliyah Kumbera (left) slides on one knee to intercept a pass from the Lady Warrior side of the net during the September 1 match between Life Way Christian and Decatur in Centerton. Kumbera was able to hit the ball back into Lady Warrior territory to begin a short volley between the two teams.