Westside Eagle Observer/SUSAN HOLLAND David Ervin, a piper of Scottish heritage from Fayetteville, plays "Dawning of the Day" on the bagpipes to open the Sept. 11 remembrance ceremony at Gravette Friday morning. Several people attended the ceremony, hosted by the Gravette Fire Department, to honor those who lost their lives in the 2001 terrorist attacks.

GRAVETTE -- Members of the Gravette Fire Department, assisted by Gravette police officers, held a remembrance ceremony Friday morning, Sept. 11, to honor fallen firefighters who lost their lives in the tragic events of 2001. Several area residents attended the ceremony in the parking lot at CV's Family Foods and many others watched as it was live-streamed on the fire department's Facebook page.

The ceremony was timed to coincide with the hour the terrorist attacks began. Bagpiper David Ervin, of Fayetteville, a piper of Scottish heritage, opened the event by piping "Dawning of the Day" and other traditional funeral songs. Fire chief David Orr welcomed those in attendance and gave a brief recap of the morning's events, giving recognition to all those who lost their lives in the September attacks and especially those who, by doing so, helped many others to survive.

At 8:45, when the first tower fell, the lights on Gravette firetrucks, police cars and ambulances assembled in the parking lot were turned on, Ervin played another song in tribute and Gravette police and fire personnel stood at attention for 3 minutes and 43 seconds to honor the 343 New York City firefighters who died.

While many scenes of the 2001 tragedy were printed in area newspapers and broadcast on TV on Friday, Gravette citizens agreed it was nice to have a local event to commemorate the occasion. Several expressed thanks to Gravette firefighters and police officers for their participation. This was the second year the department has held the event.

Westside Eagle Observer/SUSAN HOLLAND A trio of Gravette Fire Department vehicles lines up on the south side of the parking lot at CV's Family Foods to serve as a backdrop for the department's second annual 911 remembrance ceremony. The event was held Friday morning to honor those who lost their lives in the Sept. 11, 2001, terrorist attacks on the World Trade Center.

Westside Eagle Observer/SUSAN HOLLAND Gravette police officers and firefighters stand at attention to salute the giant flag displayed at the 911 remembrance ceremony held Friday morning in the parking lot at CV's Family Foods. This is the second year the Gravette Fire Department has hosted the ceremony in honor of those who lost their lives in the 2001 terrorist attacks. 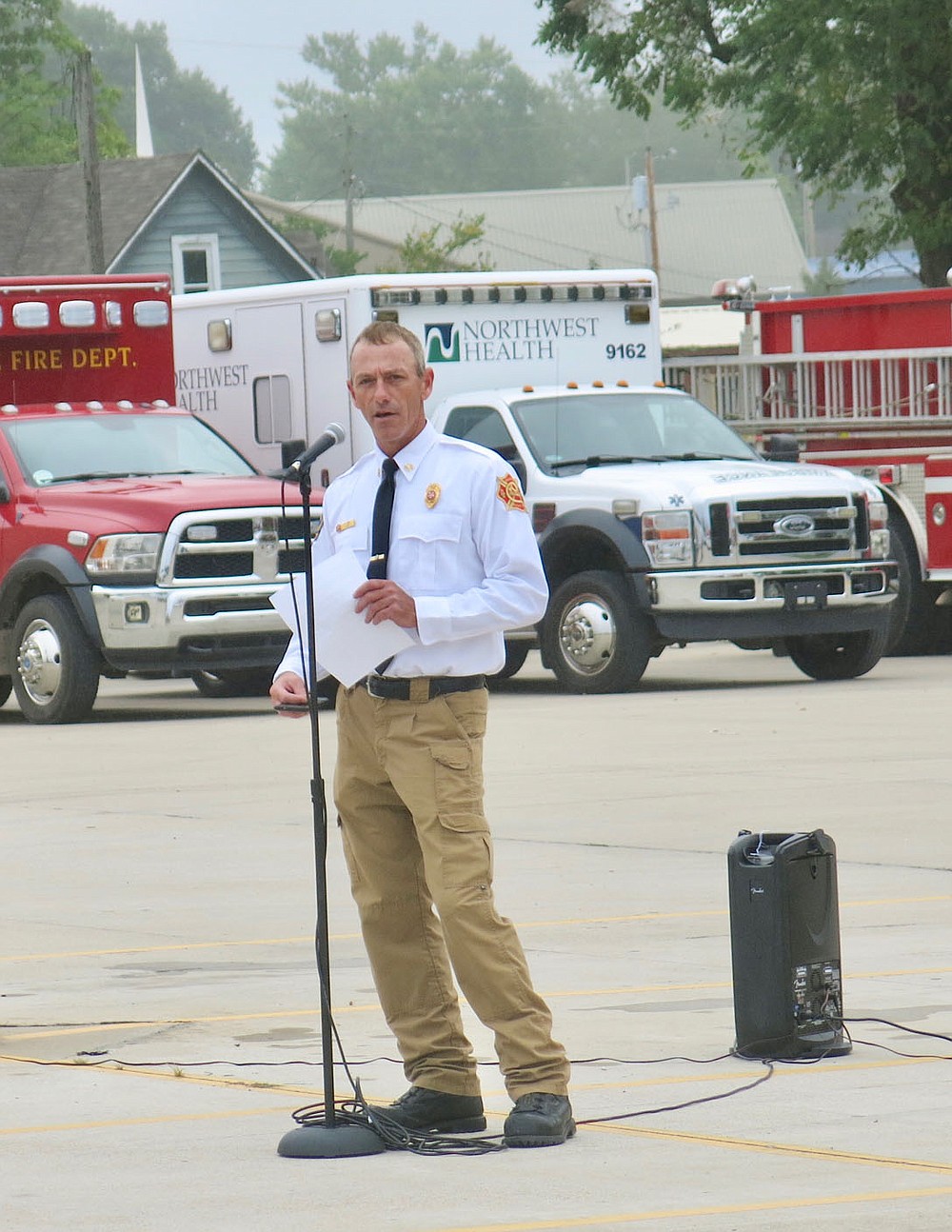