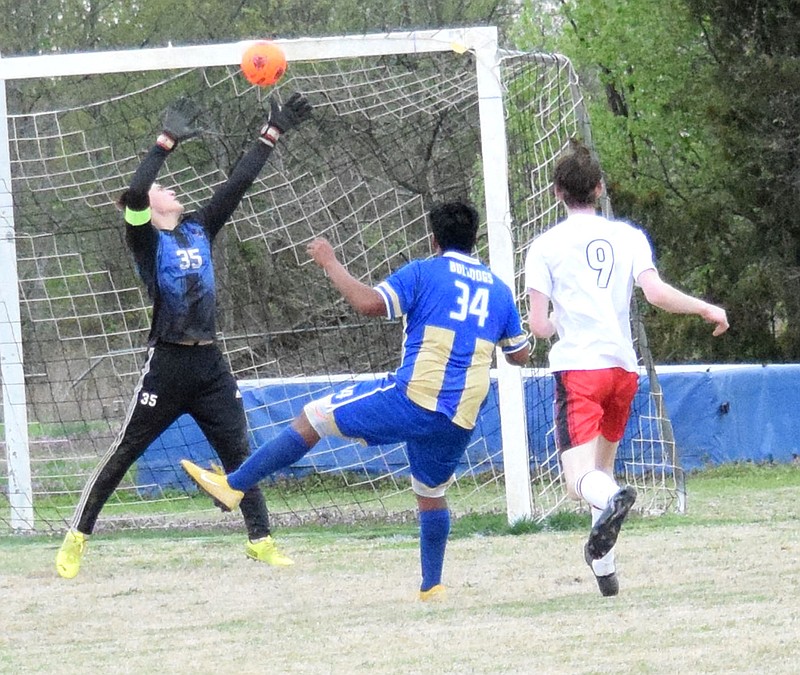 Westside Eagle Observer/MIKE ECKELS Bulldog Carlos Hernandez slips the ball over the Highlander goaltender and into the net for a goal during the March 30 Decatur-Eureka Springs varsity match in Decatur. The Bulldogs picked up the conference win 6-1 over the Highlanders in the Tuesday night contest.

DECATUR -- After several weeks on the road, the Decatur soccer team finally got its chance to play in front of a home crowd when the team returned to Bulldog Stadium for a game against the Eureka Springs Highlanders on March 30.

After dealing with several glitches in the scoreboard, the game was finally underway, when suddenly, out of nowhere, a Highlander player slipped the ball past Decatur goalkeeper Ben Watkins and into the net for the first goal of the night. Decatur coaches, players and fans were stunned that Eureka was able to score with barely 30 seconds off the clock.

This proved to be the only goal Watkins and the Bulldog defensive line would allow the Highlanders for the remainder of the contest.

At the 25-minute mark in the first half, Bulldog shooter Roger Hernandez slipped the ball past the Highlander goalkeeper and into the net for a goal. The first half ended in a 1-1 tie.

Just before the start of the second half, the scoreboard went blank, causing a 10-minute delay while Decatur officials tried to get it back online. But the clock was down for the count and officials had to keep the time and the score. 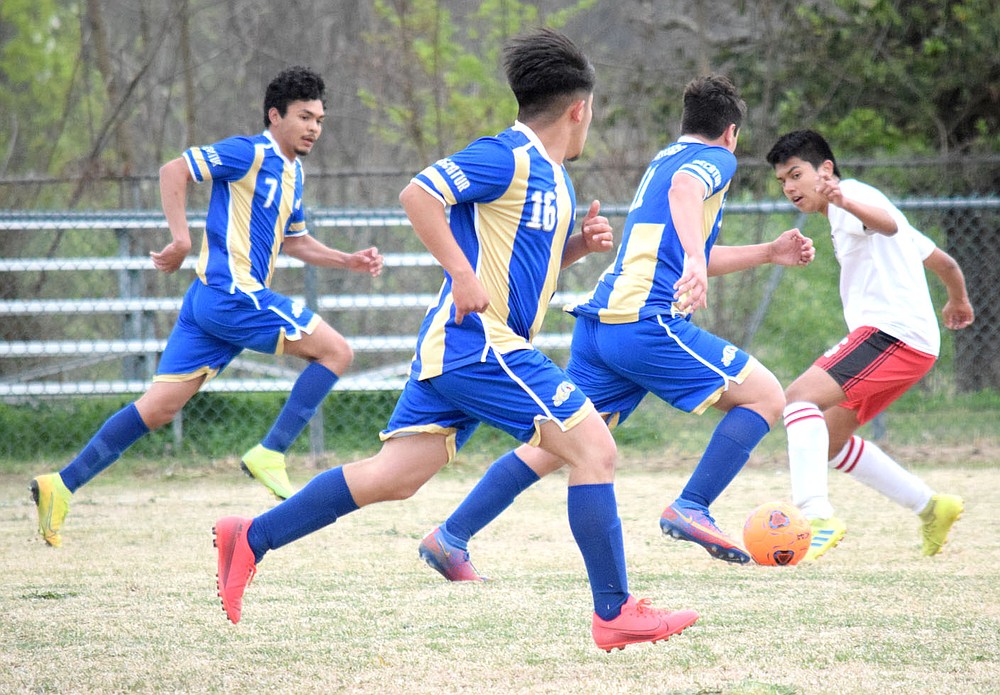 Westside Eagle Observer/MIKE ECKELS A pack of Bulldogs on the move! A Highlander player (far right) tries to stop the advancing Dogs led by Roger Hernandez (second from right) with Christian Ramirez (16) and Steven Lucero (7) watching his back. Decatur took the conference win 6-1 over Eureka Springs at Bulldog Stadium in Decatur for the first home match of the 2021 season. 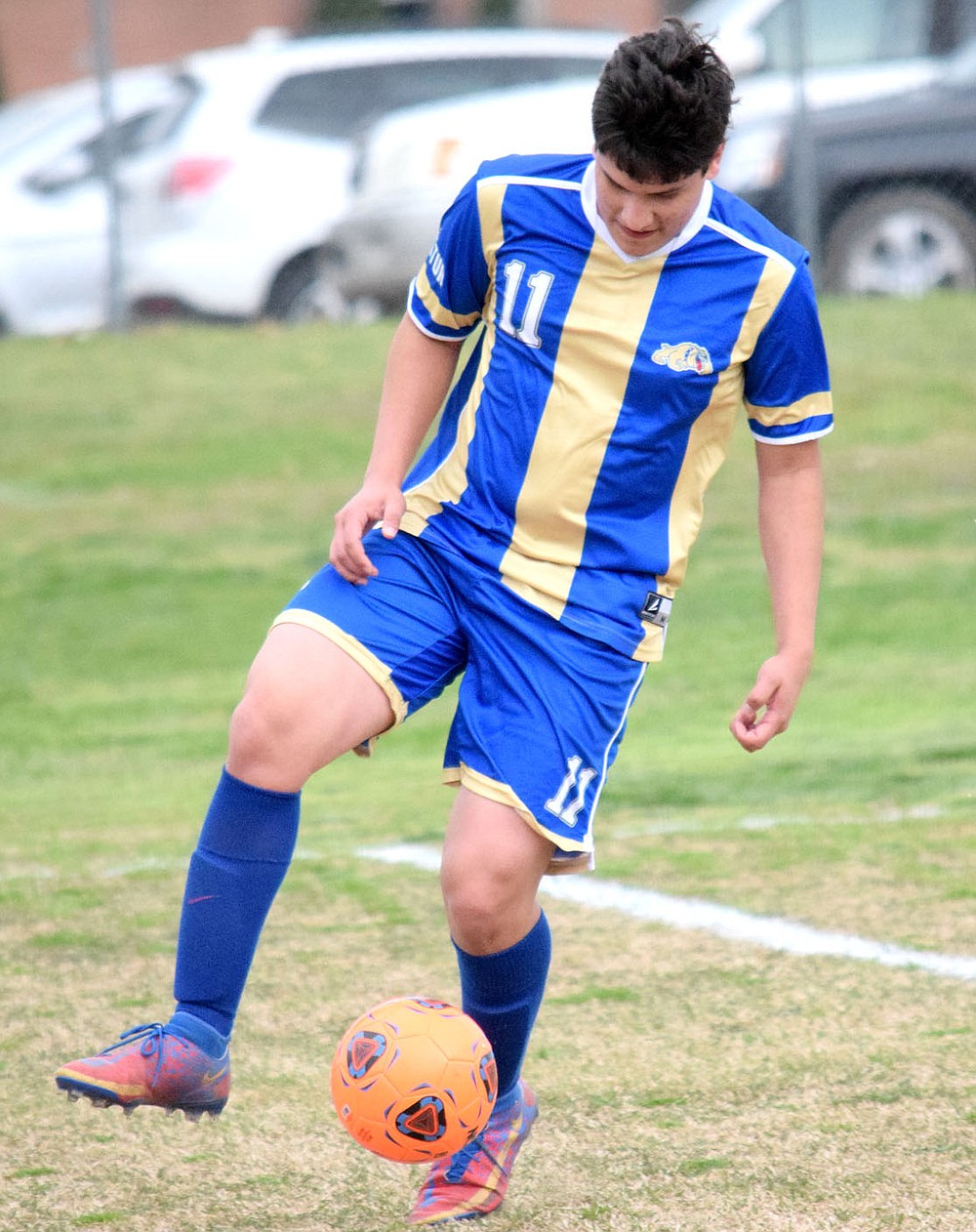 Westside Eagle Observer/MIKE ECKELS Roger Hernandez shows his agility as he maneuvers the ball in place as he prepares to attack the Highlander net during the Decatur-Eureka Springs conference soccer match at Bulldog Stadium in Decatur March 30. Hernandez picked up three goals for the contest which contributed to the Bulldogs 6-1 win over the Highlanders. 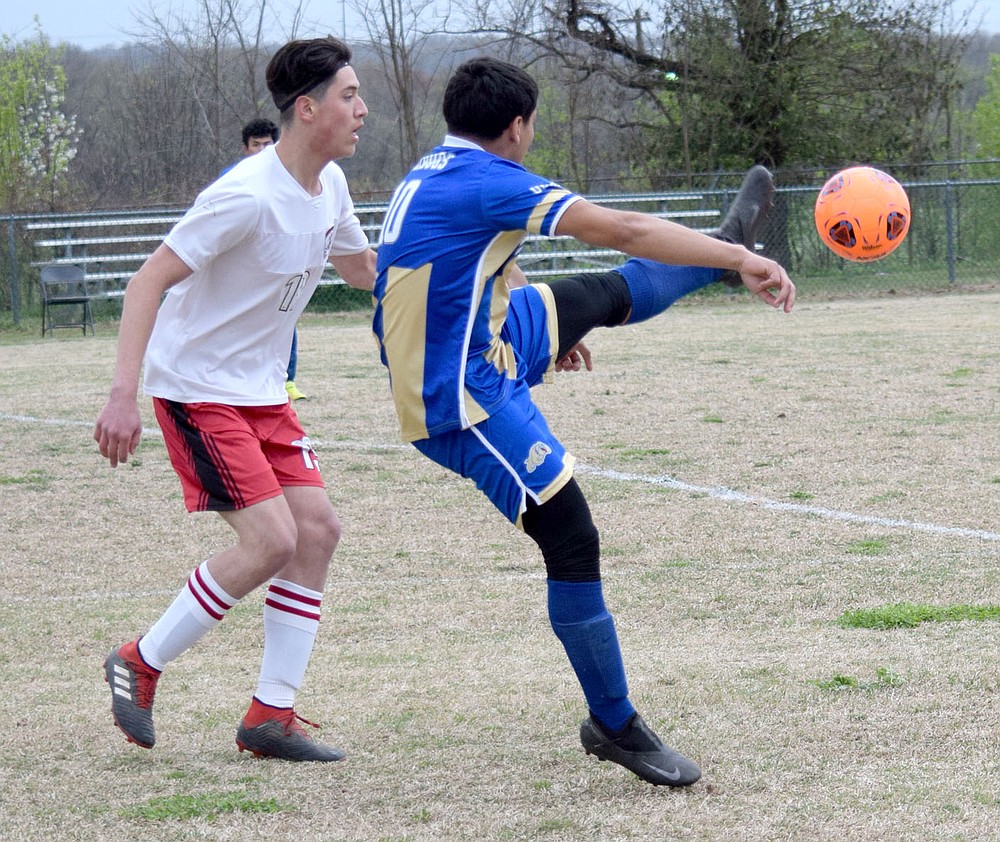 Westside Eagle Observer/MIKE ECKELS Andres Revolorio (Decatur 10) kicks the ball away from a Highlander player and sending it to the front line for a Bulldog shooting attempt during the second half of the Decatur-Eureka Springs conference soccer match in Decatur March 30. The Bulldogs took the win 6-1 in the first home contest at Bulldog Stadium. 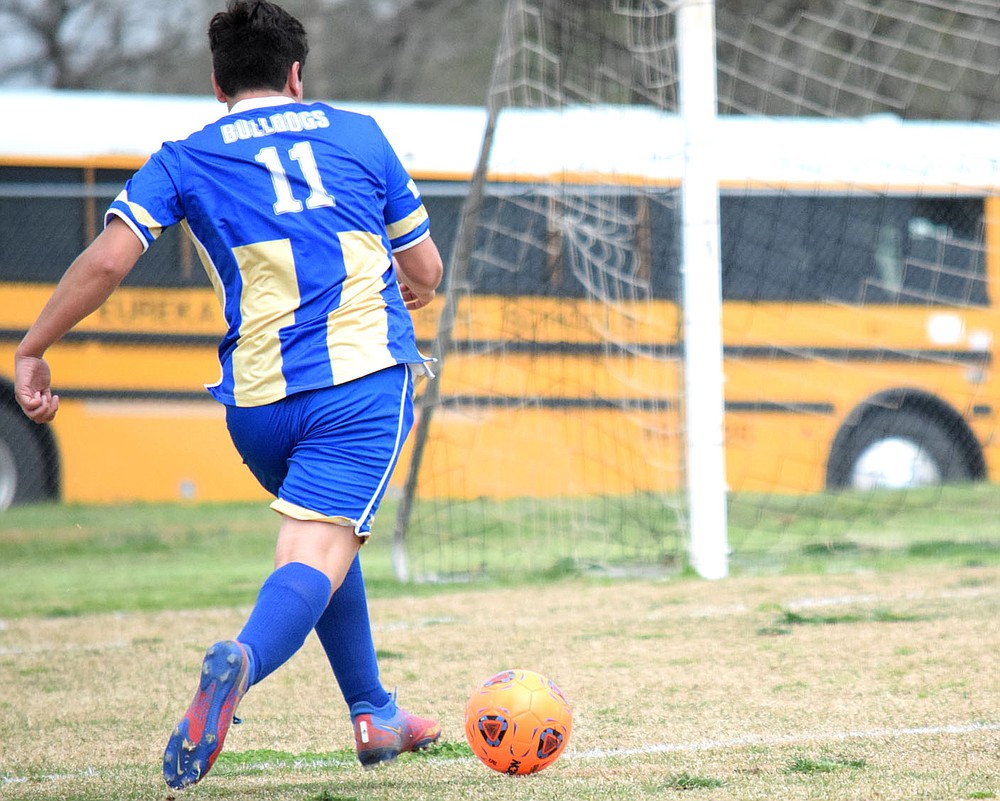 Westside Eagle Observer/MIKE ECKELS Finding the net open, Roger Hernandez launches the ball past the goaltender for the first Bulldog score of the night. Decatur pulled off a big win over rival Eureka Springs 6-1 for the conference win March 30 at Bulldog Stadium in Decatur.
ADVERTISEMENT