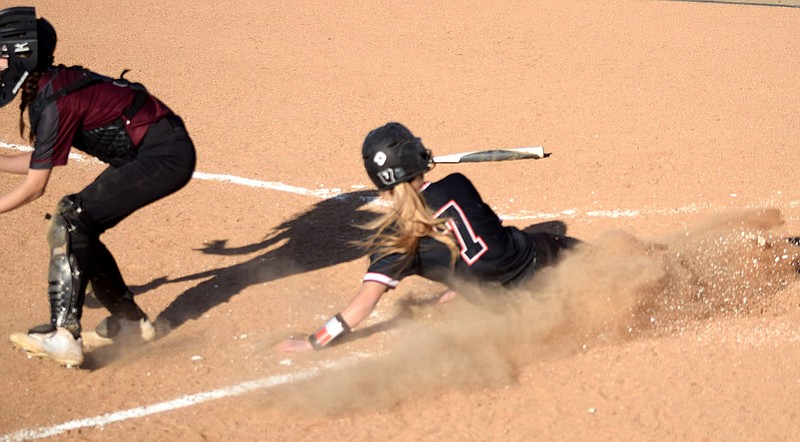 Westside Eagle Observer/MIKE ECKELS In a cloud of dust, Kelsey Pembleton (7) slides into home plate for a Lady Lions run during the Thursday night Gravette-Siloam Springs softball game in Gravette. The Lady Lions took the win 11-1 over the Lady Panthers in the non-conference matchup.

GRAVETTE -- A home run in the first inning by Lizzy Ellis, coupled with a three-run homer in the fourth by Brooke Handle, sealed the win for the Gravette Lady Lions as the team hosted the Siloam Springs Lady Panthers in a nonconference contest at Lion Softball Field in Gravette Thursday night.

Keeley Elsea led the way with three runs, followed by Ellis, Handle and Taylor Neustel with two runs each. Rounding out the scoring drive for the Lady Lions was Kelsey Pembleton and Brynne Romine with one run each.

Handle completed the five-inning game for Gravette, delivering 72 pitches, allowing only one run on two hits, walking three and striking out seven.

In an earlier game played in Farmington on March 30, the Lady Cardinals downed the Lady Lions, 13-1. Olivia Crawford had the only run for Gravette.

Handle was in the circle for Gravette, completing four innings and throwing 85 pitches. She allowed 13 runs on 15 hits (including three home runs), striking out one and walking two. 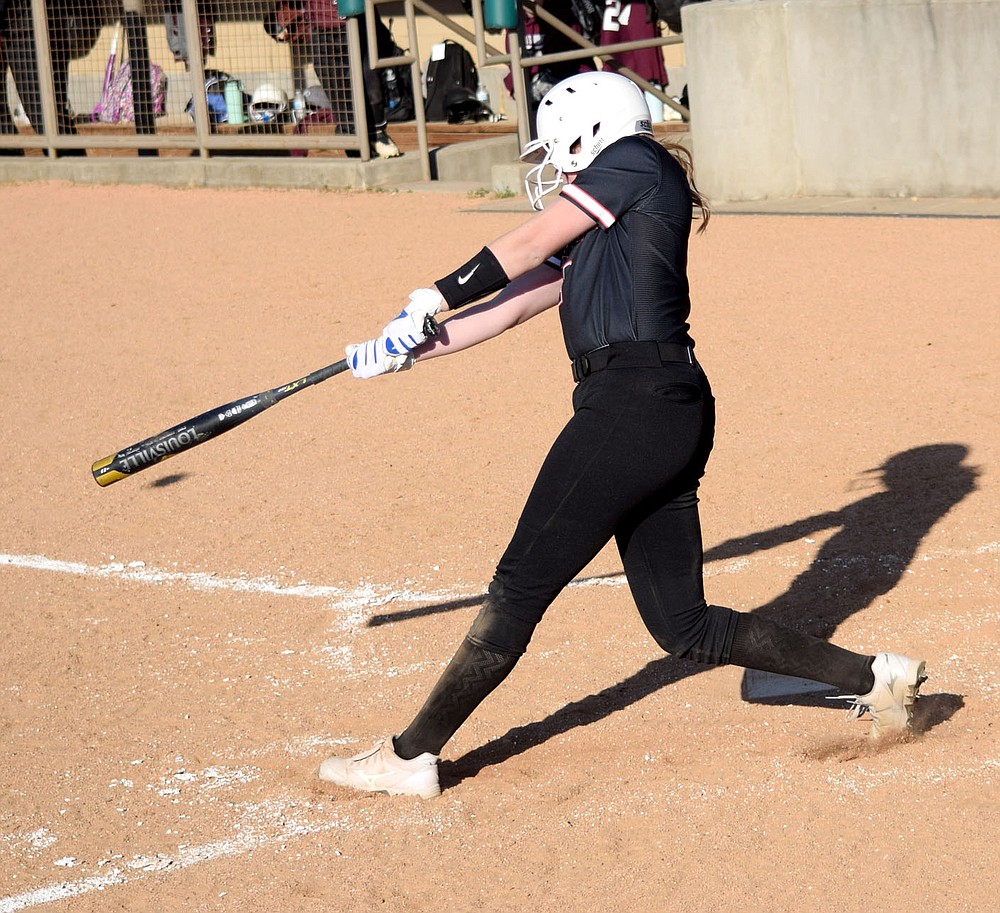 Westside Eagle Observer/MIKE ECKELS The shadow of the ball (under top of bat) is cast on the ground for a split second after Lady Lion Brooke Handle blasted it over the left field wall during the fourth inning of the Gravette-Siloam Springs softball game in Gravette Thursday night. Handle brought home two base runners for a three run home run which contributed to the 11-1 Lady Lions victory over the Lady Panthers. 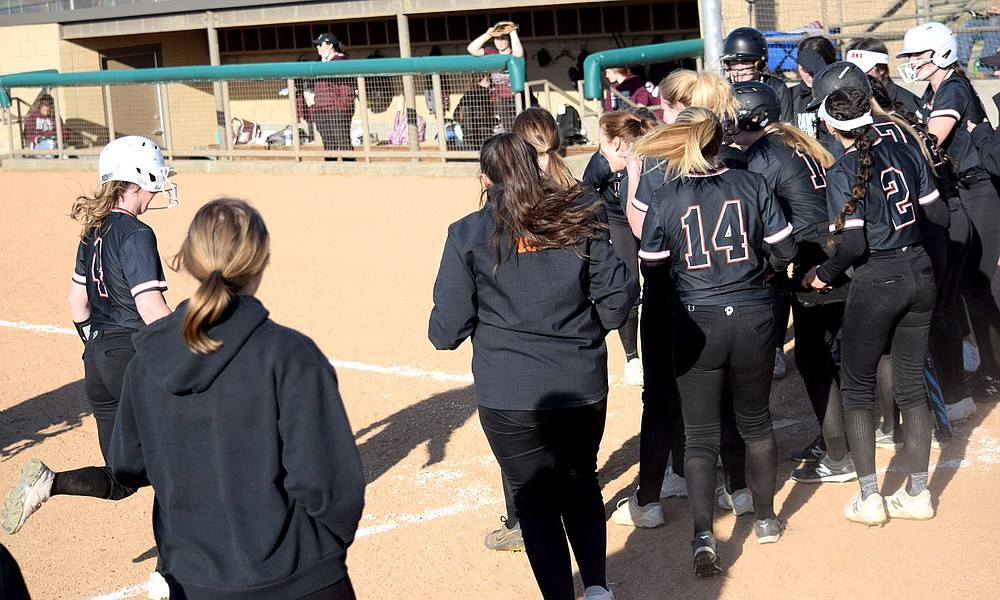 Westside Eagle Observer/MIKE ECKELS The entire Lady Lions dugout stands along the third base line as Brook Handle (4 left) runs toward home plate after she hit a three run homer over the left field wall during the Gravette-Siloam Springs softball contest in Gravette Thursday night. 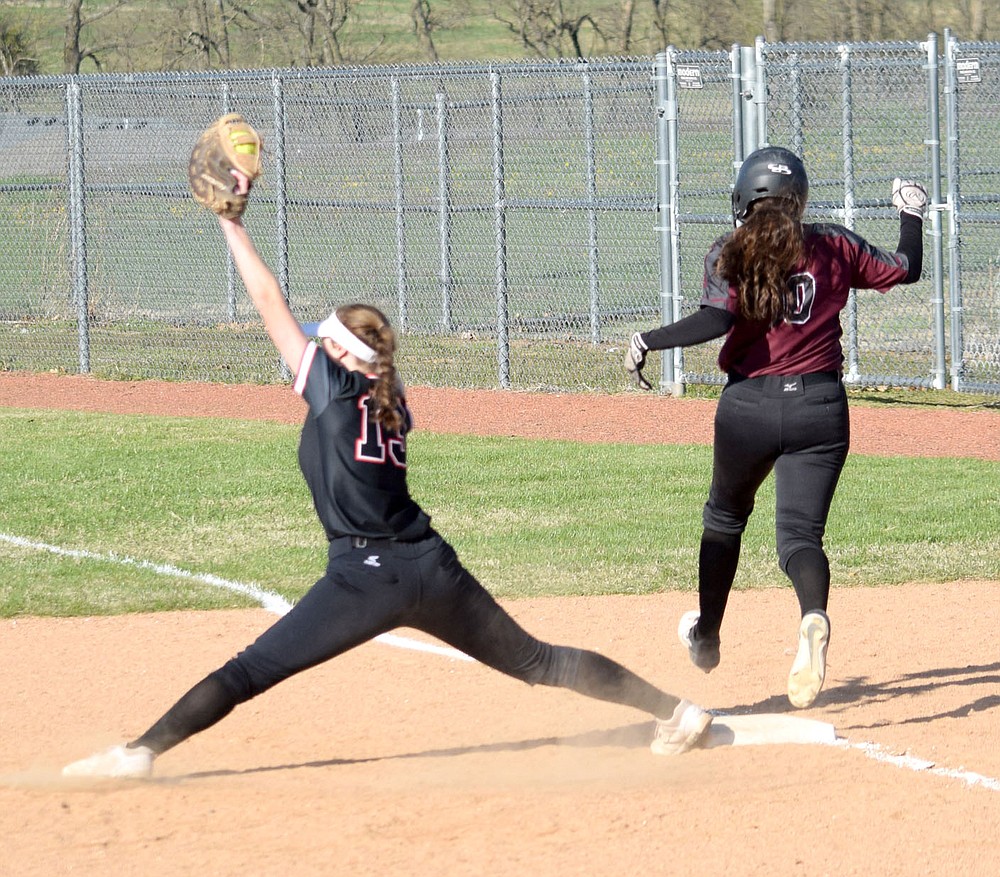 Westside Eagle Observer/MIKE ECKELS Lady Lion Taylor Neustel (13 left) stretches as far as she can to catch a throw from Lizzy Ellis near third base during the second inning of the Gravette-Siloam Springs varsity softball contest in Gravette Thursday night. Neustel's effort paid off since the Lady Panther runner was called out a first base.
ADVERTISEMENT