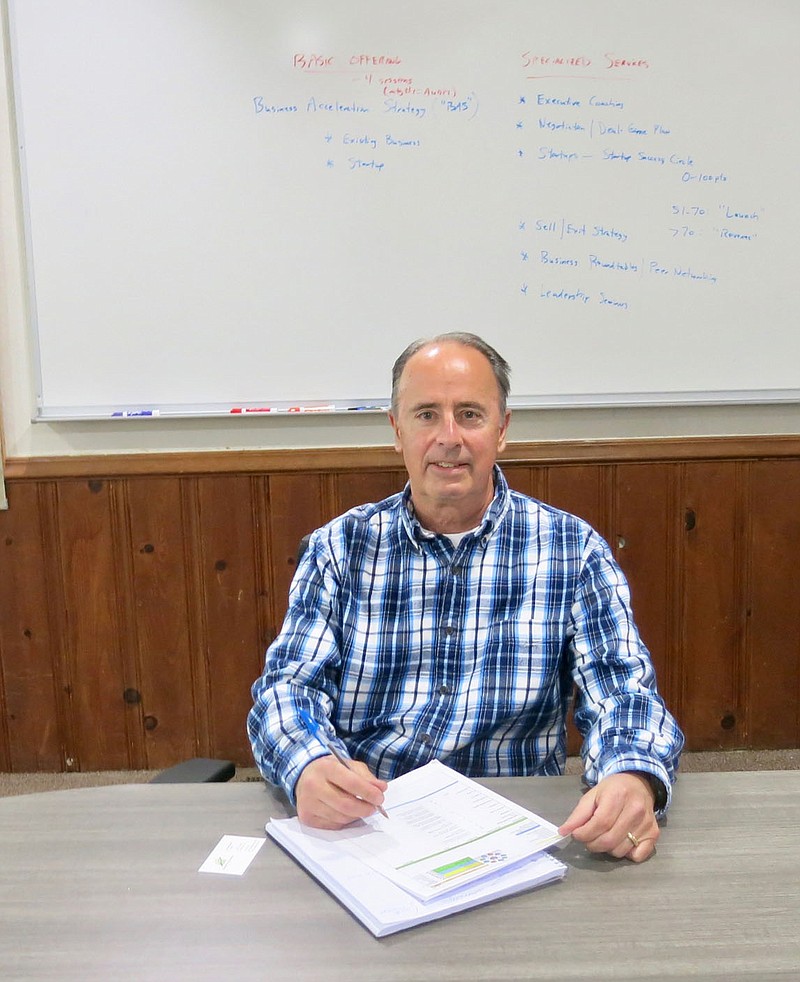 Westside Eagle Observer/SUSAN HOLLAND Steve Harari, president of Narrow Path Advisors, explains some of the services he offers during an interview Friday, April 16. Harari recently opened his business coaching and strategy consulting firm at 109 Main Street S.E. in Gravette and is available to help owners of both startup and established businesses. Business hours are 8 a.m. to 4 p.m. Monday through Friday. Visit www.narrowpathyes.com for more information or contact him at 479-323-7059 or by email at [email protected]

GRAVETTE -- Another Main Street building has a new occupant since Steve Harari opened Narrow Path Advisors, a business coaching and strategy consulting firm, at 109 Main Street S.E. earlier this month in the building formerly occupied by the Gravette Gym. Harari offers his services as a business advisor with 30 years of experience in starting, growing and running businesses as a founder, seed investor or early employee in over 20 companies. He has been CEO of five or six companies and has worked with startups, mid-size and large established businesses, most in a tech-related field.

Harari was born in Wisconsin and spent his early years in New York while his father worked in New York City. He graduated from high school in Durango, Colo., earned a bachelor's degree from Swarthmore College in Swarthmore, Penn., and went on to obtain an MBA from Stanford University. He said he knew that the MBA program at Stanford had a good reputation and the California climate appealed to him after living through the harsh winters in the Northeast.

Steve lived in Silicon Valley for 20 years and spent another 15 years in the Sacramento area. He met his wife Cathy in California where she was an accountant and corporate controller for companies in Silicon Valley. They married at age 34, a first marriage for both of them. He relates the interesting side note that he and Cathy share the same birthdate, with only four hours separating their births. He says Cathy is very supportive of his business but now spends most of her time on her own interests of gardening and cooking.

The Hararis decided a couple of years ago that they wanted to leave California and began to search online for a new location. Steve said they investigated areas in Kentucky, Tennessee and Arkansas and, when he began to study Northwest Arkansas, he realized it was a progressive area with expanding business opportunities. He was impressed that it is the home of several Fortune 500 companies, including Walmart, J.B. Hunt and Tyson Foods. He and Cathy bought a house in Sulphur Springs in October 2019 and, after having it renovated, they moved to Arkansas in July 2020. They have no relatives or other ties in the area but both are enjoying living here.

Steve said his business interests were primarily in the areas of marketing management and portfolio management but they expanded over the years to include almost all areas of business development. He has even had some experience in the agribusiness field when he spent two years in Indonesia working with an American investor and the Indonesian government to develop a mechanical cotton farm. They imported mechanical pickers and brought in about a dozen families from cotton farms in Texas and California to train the locals in operating them. They also built a cotton gin during his time there.

Harari took possession of the building on Main Street on April 1 and set up a table on the sidewalk out front at the gallery walk Thursday, April 15. He introduced himself to potential clients and other area citizens and said he made several good contacts.

The basic offering at Narrow Path Advisors is a program of business acceleration strategy. Harari provides six specialized services within that program. A four-meeting session is available for both existing businesses or startup companies with the first meeting being a free audit session in which he will do an evaluation and make recommendations for the business.

Specialized services are available for executive coaching in which company leaders can meet with Harari on a weekly, monthly or quarterly schedule to learn skills in negotiation and develop a game plan for their businesses. A program, especially for startups, employs what Harari calls a star success circle by which he evaluates a business plan on nine points to determine the status and readiness to launch.

A four-session program on selling a business helps the owner develop an exit strategy that will maximize the value of the business. Harari notes that most businessmen are so busy running their firms that they don't take time to focus on marketing, so sometimes it is necessary to reposition a business in order to enhance its sale value.

Harari offers a program of business roundtables where business owners can meet periodically and network with their peers. He will provide a meeting room for the roundtables and help facilitate discussion about the challenges and issues they face.

Finally, he hopes to host leadership seminars which may take the form of a one-day retreat. Harari says he particularly enjoys talking about leadership and hopes to provide a fresh perspective on guiding a company to ensure its successful operation.

Business hours for Narrow Path Advisors are 8 a.m.to 4 p.m. Monday through Friday. Persons interested in starting a business or established business owners interested in strengthening their operation are invited to contact Harari at 479-323-7059 or by email at [email protected]