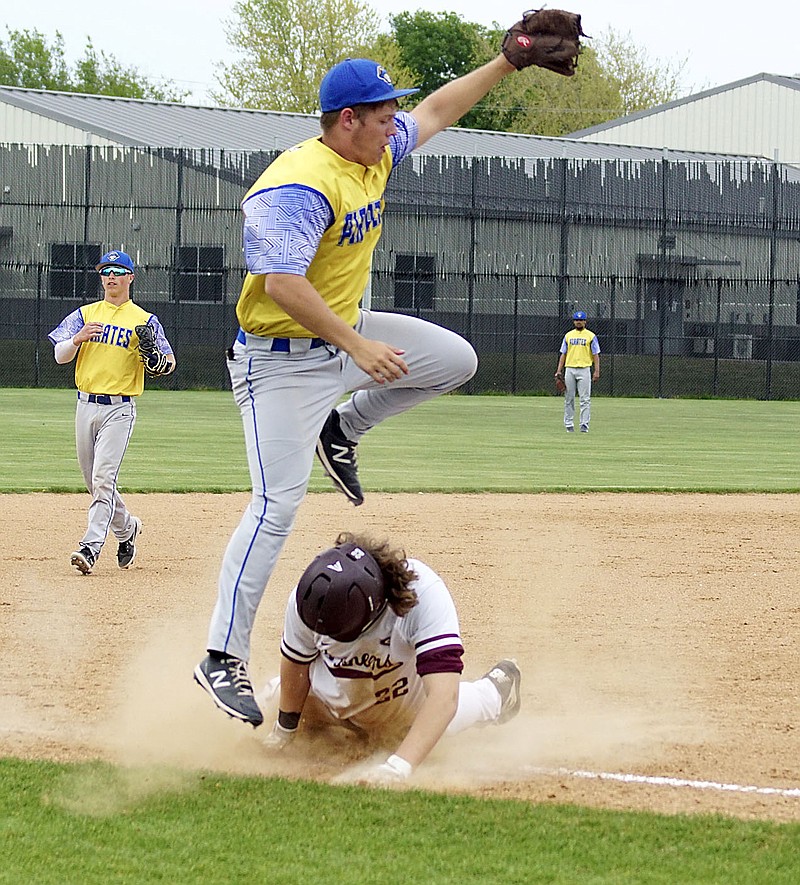 Westside Eagle Observer/RANDY MOLL Gentry's Crafton Beeler slides into third as the Cedarville third baseman leaps into the air in an attempt to catch the throw at the Merrill Reynolds Memorial Complex at Gentry High School on Thursday.

GENTRY -- After being shut out by Shiloh Christian in a five-inning game at home on Monday, April 19, the Pioneers defeated Cedarville, 16-6, on Thursday but then lost to the Northwest Arkansas HomeSchool Hornets in a second game on Thursday night.

Shiloh Christian scored two runs in the first, nine in the third and three more in the fourth for their 14-0 win. Shiloh had 18 hits in the game and committed no errors.

Gentry had two hits in the game, singles by Riggs Harper and Isaiah Lemke.

Lemke, Hayden Henry and Cody Tucker all took their turns on the mound. Lemke was credited with the loss.

Things were all tied up at three apiece when Gentry scored five runs in the bottom of the fifth and then sealed the deal with another eight runs in the sixth for the 16-6 victory.

The Pioneers answered a Cedarville run in the first with two runs of their own. Isaiah Lemke hit a line-drive double to left, bringing in Riggs Harper, who had walked. After stealing third, Lemke scored on a catcher's error.

After Cedarville took a 3-2 lead in the second, Gentry tied things up at three when Dawson Wright singled on his first pitch and brought home a run.

The Pioneers jumped ahead for good with five runs in the fourth. Crafton Beeler hit a double to left and brought in three runs. An Aiden Whitehead ground out brought home Beeler; and Cody Tucker, who had been hit by a pitch, scored when Hayden Henry hit a grounder to the shortstop and reached on an error.

Lemke had three hits in five at-bats to lead the Pioneers. Lemke, Beeler and Isaak Crittenden all hit doubles in the game. Beeler led in RBIs, with three.

Northwest Arkansas HomeSchool Hornets jumped ahead early with three runs in the first and then added four in the fourth and two in the fifth to make Gentry play catchup for the rest of the night on Thursday.

The Pioneers tried to fight their way back after falling behind by five runs in the fourth inning, but the comeback fell short, with the Hornets hanging on to their lead and taking the game, 9-8.

In addition to solo runs in the first and third, Gentry scored three runs in the fourth, another two in the sixth and one in the seventh in the loss. Dawson Wright, Riggs Harper, Isaiah Lemke and Cody Tucker picked up RBIs in the game.

Harper led Gentry in the batting department with three hits and three runs batted in. Isaak Crittenden had four hits.

Both teams had 11 hits in the game. The Hornets committed five errors to Gentry's one. 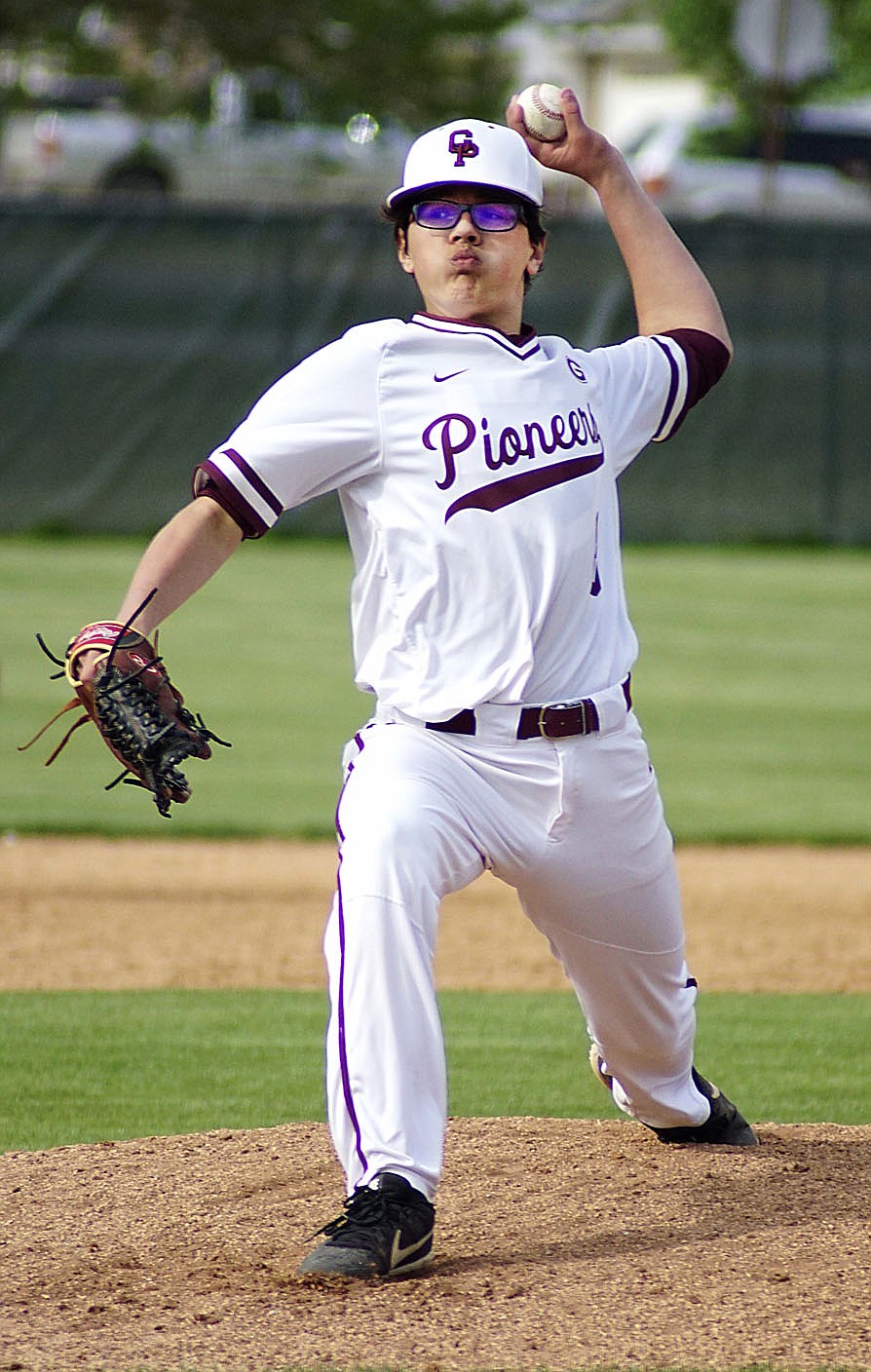 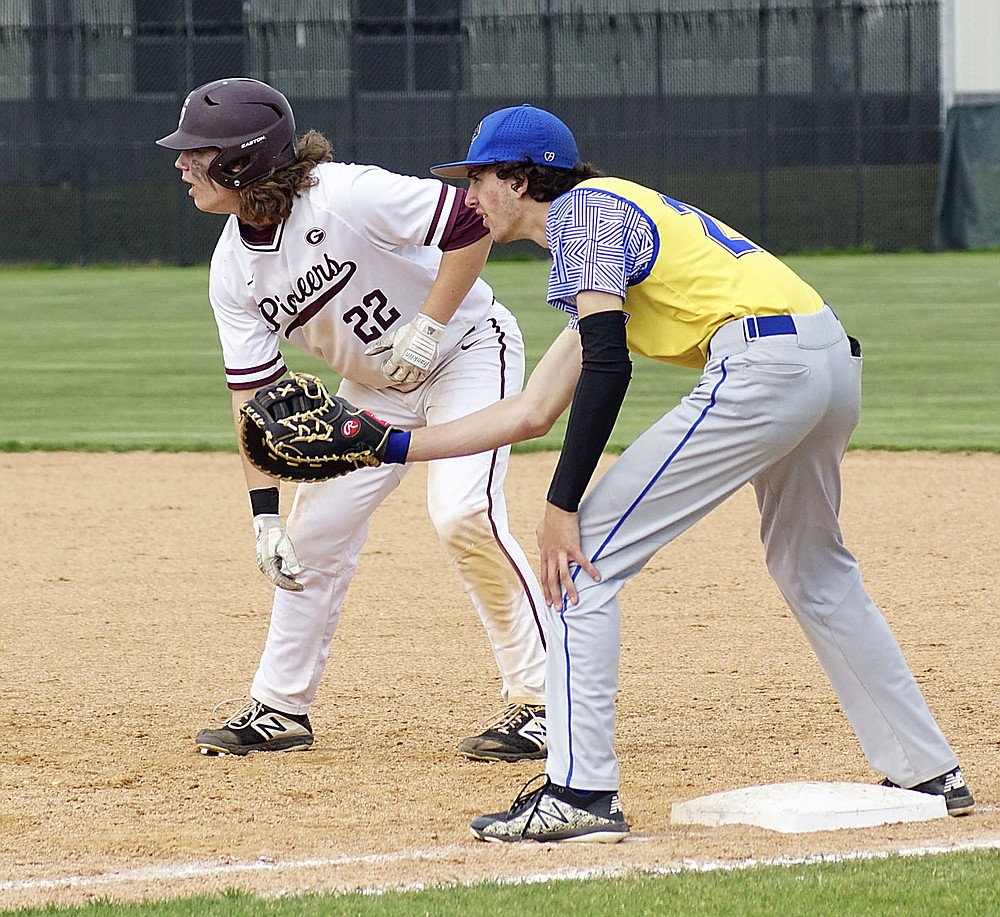 Westside Eagle Observer/RANDY MOLL Both Gentry's Crafton Beeler and the Cedarville first baseman watch the pitcher for the throw during Thursday's game at the Merrill Reynolds Memorial Complex at Gentry High School. 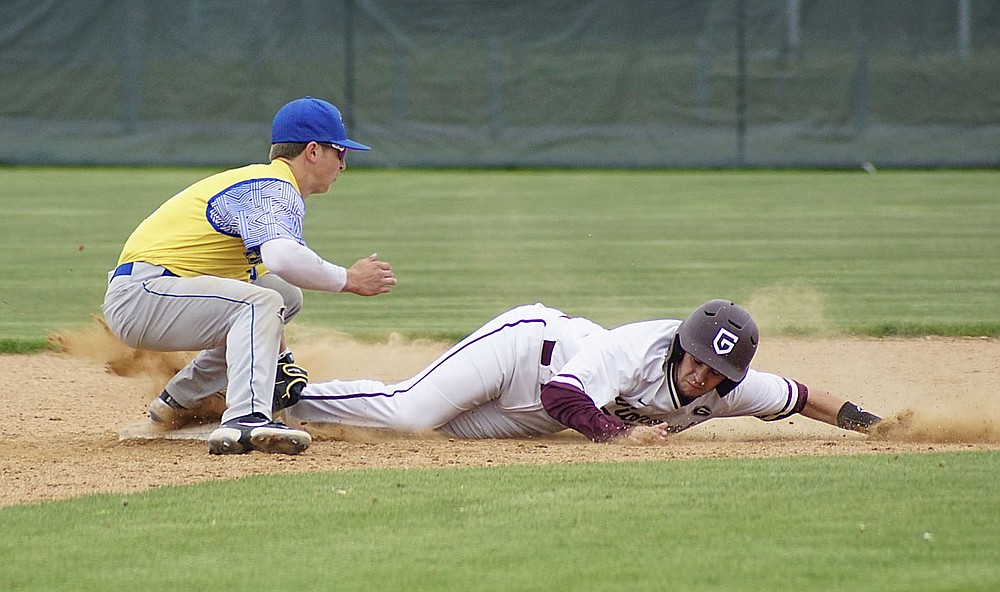 Westside Eagle Observer/RANDY MOLL Gentry's Jonathan Corter slides into the Cedarville tag in an attempt to steal second base at the Merrill Reynolds Memorial Complex at Gentry High School on Thursday.

Westside Eagle Observer/RANDY MOLL Gentry's Jonathan Corter slides into the Cedarville tag in an attempt to steal second base at the Merrill Reynolds Memorial Complex at Gentry High School on Thursday.
ADVERTISEMENT