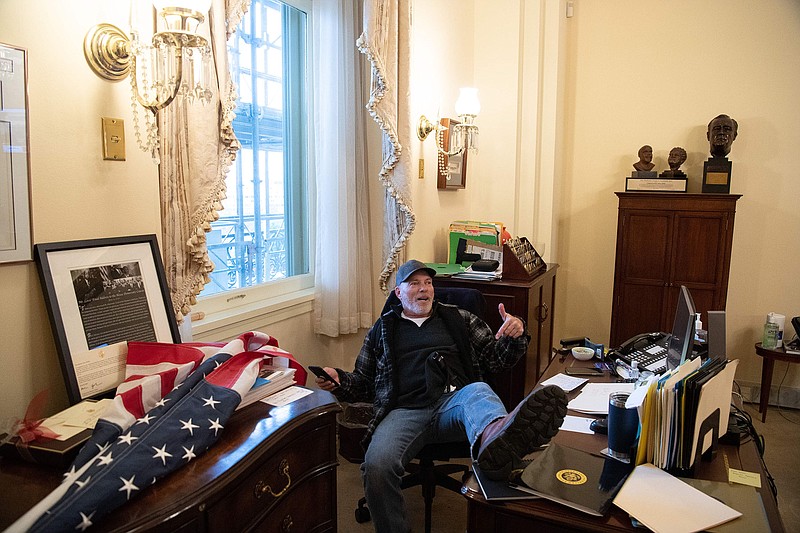 Special to the Arkansas Democrat Gazette - A supporter of US President Donald Trump sits inside the office of US Speaker of the House Nancy Pelosi as he protest inside the US Capitol in Washington, DC, January 6, 2021. - Demonstrators breeched security and entered the Capitol as Congress debated the a 2020 presidential election Electoral Vote Certification. (Photo by SAUL LOEB / AFP) (Photo by SAUL LOEB/AFP via Getty Images)

GRAVETTE -- Richard Barnett, 60, of rural Gravette, will remain in jail pending his trial in connection with the Jan. 6 riot at the U.S. Capitol, according to a ruling Thursday in federal court in the District of Columbia.

She said hundreds of Americans used force and violence to try to obstruct the peaceful democratic transfer of power after the presidential election.

And Barnett was "one of the stars of this assault," Howell said.

"The government has presented overwhelming evidence that this defendant, Richard Barnett, enthusiastically participated in this act of assaulting the Capitol and disrupting the democratic process," Howell said. "What happened on that day at the U.S. Capitol is criminal activity that is destined to go down in the history books of this country."

Armed with a stun gun, Barnett entered House Speaker Nancy Pelosi's office in the U.S. Capitol on Jan. 6 and posed for pictures with his feet propped up on a desk, according to the charges against him. The photos were widely seen.

Barnett also took an envelope from a desk in Pelosi's office, leaving a quarter and a nasty note behind for her, the charges say.

"He not only entered the Capitol without authority, he strutted into the office of the speaker of the House of Representatives, Nancy Pelosi, sat behind her desk and had pictures of himself, smiling and seemingly enjoying himself," Howell said.

Outside the Capitol, Barnett talked to reporters and posed for pictures holding the envelope from Pelosi's office.

The next day, Barnett turned off the location services on his cellphone and drove home to Arkansas, according to prosecutors. Barnett paid cash for gas and covered his face during the drive. He arrived home midafternoon on Jan. 7 and, returning a call from the sheriff, agreed to surrender at the Benton County Sheriff's office the next day. Barnett was initially jailed in Fayetteville.

Investigators have yet to find the cellphone and stun gun that Barnett had with him at the Capitol, Howell said during Thursday's hearing.

Videos and photos from inside the Capitol showed that Barnett was carrying a ZAP Hike 'N Strike 950,000 Volt Stun Gun Walking Stick that he had bought at Bass Pro Shop in Rogers, according to prosecutors.

The FBI found the stun gun package at Barnett's home near Gravette, but not the weapon itself.

On Jan. 15, Chief Magistrate Judge Erin Wiedemann of the federal court in Fayetteville ruled that Barnett could be released on $5,000 bond to house arrest the following day.

"The defendant will be held without bond pending trial," read an entry in Barnett's District of Columbia federal court docket.

Howell indicated Thursday that Barnett was participating in the videoconference hearing from the District of Columbia jail.

During the Jan. 15 detention hearing in Fayetteville, FBI Special Agent Jonathan Willett said Barnett told the agents: "If y'all go out there [to my house] and do a search warrant, you can see all my s*. You ain't going to find nothing out there. ... I assure you I'm a smart man. There's not anything there."

Howell said she read the transcript of that hearing.

"I don't know how smart Mr. Barnett is, but he's certainly a braggart," she said near the end of Thursday's hearing. "Bragging to law enforcement about what he has done to cover his tracks is not a smart thing to do."

In her ruling, Howell said the charges against Barnett were "too benign" to describe what happened at the Capitol.

"On Jan. 6, 2021, there was an assault on the U.S. Capitol during a joint session of Congress certifying the 2020 presidential election results," she said. "During this assault, scores of individuals forced entry into the Capitol by breaking windows, pushing through the Capitol doors, reaching closed, highly sensitive and reserved areas, assaulting members of the U.S. Capitol Police and the D.C. Police force.

"This violence disrupted the constitutional function of Congress necessary for the presidential transition and the functioning of our democracy," she said. "This was not a peaceful protest. Hundreds of people came to Washington, D.C., to disrupt the transition of power and to thwart Congress, a branch of the federal government, from carrying out its duty in fulfilling its constitutional task of officially certifying the vote of the Electoral College. It was an assault on the Capitol that was intended to disrupt the peaceful transition of power to a new administration."

Five people died, and many more were injured, Howell said.

"We're still living here in Washington, D.C., with the consequences of the violence in which this defendant is alleged to have participated," Howell said. "Thousands of National Guard troops were brought into the Distinct of Columbia to ensure that last week's inauguration could proceed peacefully."

Thousands of National Guard troops remain in the city, she said.

"Shockingly, this risk of violence was caused by fellow Americans," Howell said.

Barnett drew the attention of Fayetteville police twice last year when he took a rifle to demonstrations, but he wasn't arrested either time.

On July 25, Barnett was at a "Back the Blue" event with several other armed demonstrators at College Avenue and Dickson Street, next to the Washington County Courthouse, according to a Fayetteville police report.

A woman called police to say a man (believed to be Barnett, based on the description and his clothing) had pointed a rifle at her vehicle as she drove through the intersection. But after police viewed surveillance video, they determined that Barnett didn't raise the rifle, according to the report.

Barnett told a police officer that he was there to "protect" the demonstrators from violence and was exercising his First and Second Amendment rights, according to the police report.

Then, on Sept. 20, Fayetteville police received a report that a man was carrying what appeared to be a machine gun at the same intersection where Barnett was questioned in July.

Barnett told police that he was there for a "Save the Children" protest.

The two Fayetteville police reports were included as exhibits in a court filing Wednesday in the District of Columbia to support the argument for keeping Barnett in jail.

In Thursday's hearing, Howell said Barnett may not have been arrested in the Arkansas cases, but they suggest a pattern of "provocative behavior."

"They're in line with the criminal conduct in this case," she said.

Howell also questioned whether Tammy Newburn, Barnett's wife, could be a third-party custodian for him if he were released to house arrest, as Wiedemann planned to do.

Howell noted that, based on the transcript of the Jan. 15 hearing in Fayetteville, Newburn didn't know much about Barnett's guns, stun gun or cellphone. Newburn did state during that hearing that Barnett had some guns that had been given to a friend before Barnett surrendered to authorities.

Howell said, based on the transcript, that the jacket and hat Barnett wore during the Capitol riot were found under a dog crate in the trunk of Newburn's vehicle.

Anthony Siano of White Plains, N.Y., sent a letter to Howell on Jan. 17 saying he had been Barnett's attorney since the weekend of Jan. 9-10 and he hadn't been informed of the late-night proceedings on Jan. 15 that prevented his client from being released on bond the next day.

Siano didn't know of the change until the morning of Jan. 16, when he was contacted by Newburn.

"I ask the court to vacate the transport order and direct that Mr. Barnett be returned to the Washington County Detention Center immediately," Siano wrote in the letter, referring to the jail in Fayetteville.

"The rationale offered for why I was omitted from those is a ruse concocted to justify punishing Mr. Barnett with a needless cross-country trip and to further separate him from his family and friends," Siano wrote.

On Monday, Howell wrote on the first page of Siano's letter: "Construed as a motion to vacate transport order. Order denied." Howell signed her name underneath the note.

On Thursday, she warned Siano that the accusations he made in his letter were "frivolous and without merit."

"This is not what you call a needless cross-country trip," Howell said. "His presence is required in this district," she said, referring to Barnett.

"If you're going to continue in this case, I caution you about how you conduct yourself because that letter is wholly inappropriate," Howell said.

Also on Thursday, she granted Siano's motion to appear before the District of Columbia federal court as Barnett's attorney.