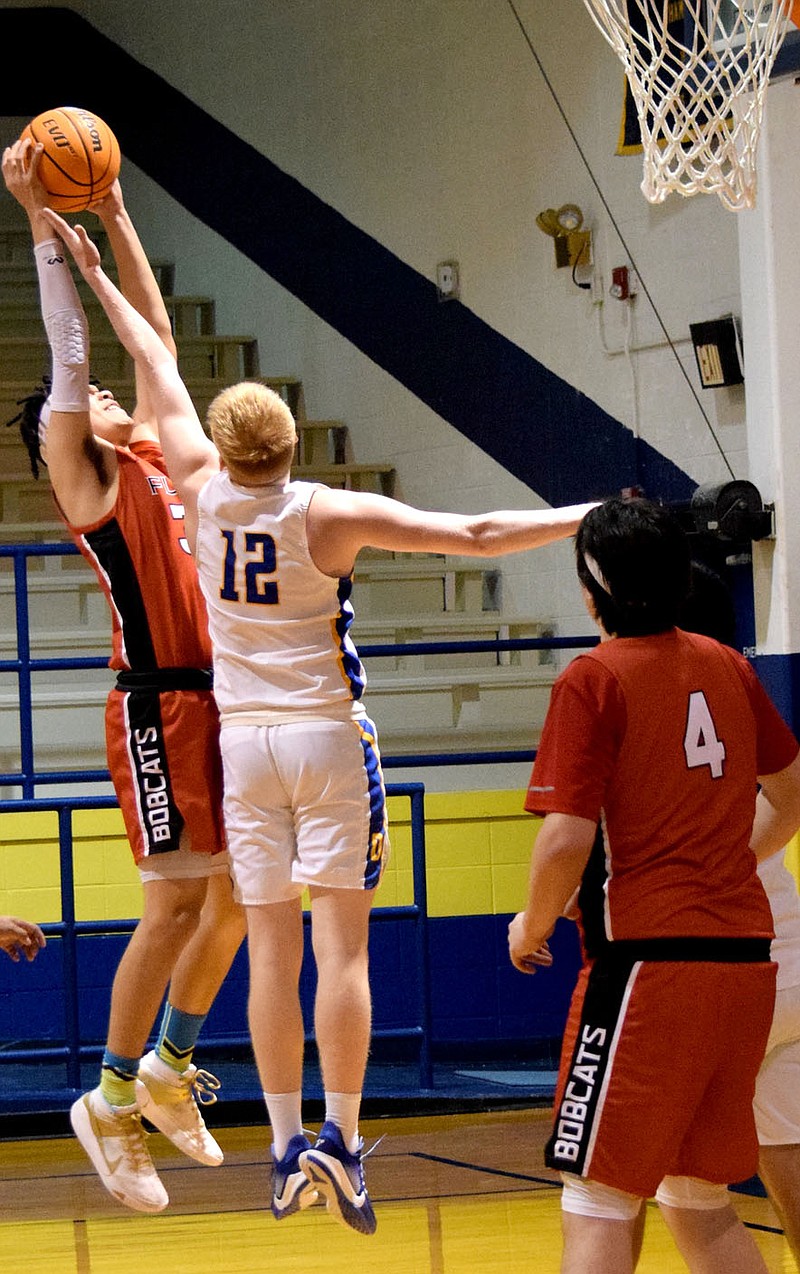 Westside Eagle Observer/MIKE ECKELS Bryson Funk (Decatur 12) goes up with Bobcat Paul Hart's who attempts a jumper from the left side of the key during the Decatur-Flippin conference basketball contest at Peterson Gym in Decatur Feb. 9.

DECATUR -- In one of the most bizarre games of the season, the Decatur Bulldogs hosted the Flippin Bobcats in a 2A-1 conference contest at Peterson Gym in Decatur on Feb. 9. Unfortunately, the icy weather outside Peterson Gym forced the cancelation of the contest at the halftime break.

The contest got off to a rocky and bizarre start after the tipoff between Decatur's Trevor Girdner and Flippin's Roy Dale Smyser landed in the hands of the Bobcats. As Flippin set up for its first possession of the contest, officials suddenly stopped the game at 8:22 in the first quarter. The problem, the clock was counting up and not down. Coach Shane Holland, one of the most experienced timekeepers, tried to fix the problem but the clock kept counting up. Finally, after five minutes of work on the clock, it began to count down and it was reset to 7:38 and the game proceeded.

With 52 seconds elapsed off the clock, Bobcat Roy Dale Smyser was fouled by the Bulldogs, sending him to the line for two free throws. Smyser missed the first but hit the second for the first point of the contest. Seventeen seconds later, a Flippin shooter made a layup to extend its lead 3-0 in the first quarter.

Bulldog Enrique Rubi sank a layup at the five-minute mark for Decatur's first two points of the night. Flippin continued to roll over Decatur in the first quarter, taking a 26-9 lead into the second quarter.

The Flippin group had a 139 mile, three-hour journey ahead of them. With the road conditions beginning to ice up, their trip would take longer than normal.

So the contest went to the Flippin Bobcats, who won the game in two quarters, 52-20, over the Decatur Bulldogs to capture the conference win.

At present, the Flippin Bobcats are in first place in the 2A-1 conference, while the Decatur Bulldogs are in eighth place ahead of the Haas Hall Academy Huskies going into the final two days of the regular season.

Leading the Decatur Bulldogs in scoring was Carlos Hernandez with nine, followed by Christian Ramirez with five, Enrique Rubi and Trevor Girdner each with two, JJ Herrera and Edger Herrera with one point each.

The Flippin Bobcats had three players in double figures, including Smyser with 22, Devyn Payne and Paul Hart with 10 points each, followed by Evan Riggs with eight, Gage Hulen and Gabriel Davis with two points each. 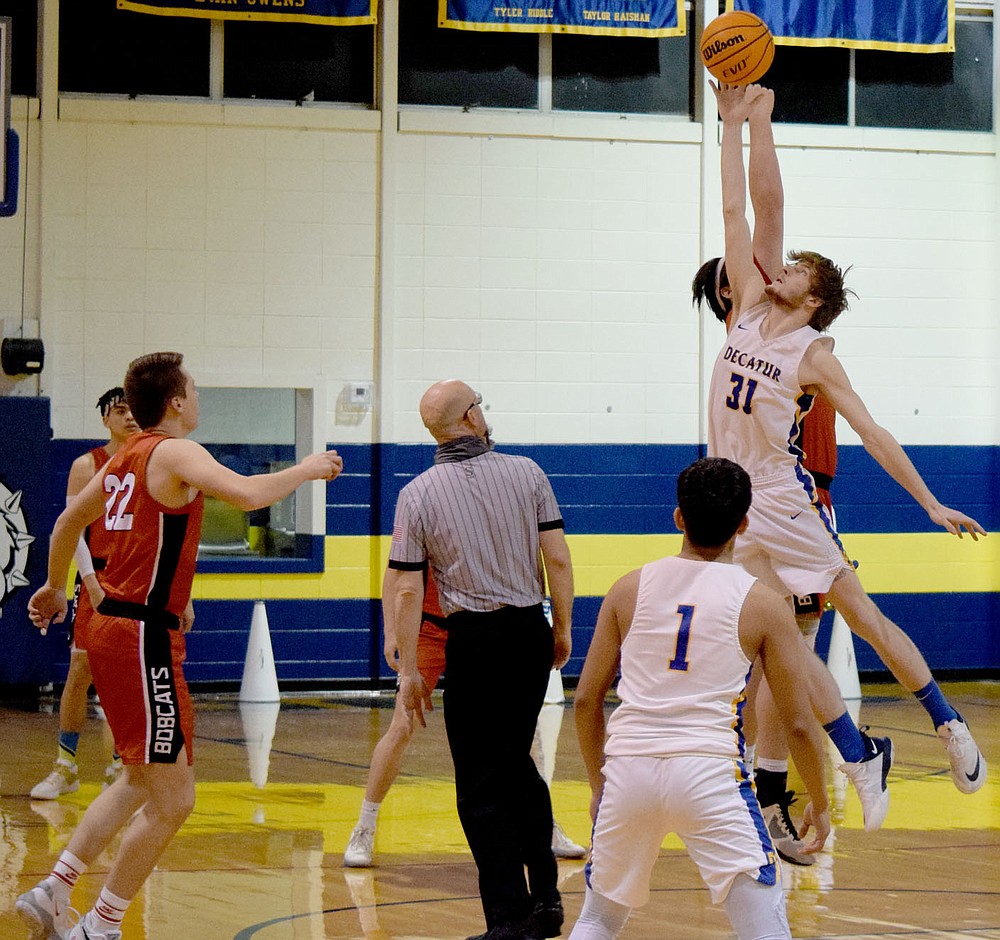 Westside Eagle Observer/MIKE ECKELS The tipoff between Decatur’s Trevor Girdner and Flippin’s Roy Dale Smyser eventually lands in the hands of a Bobcat player during the opening of the Decatur-Flippin conference contest at Peterson Gym Feb. 9. 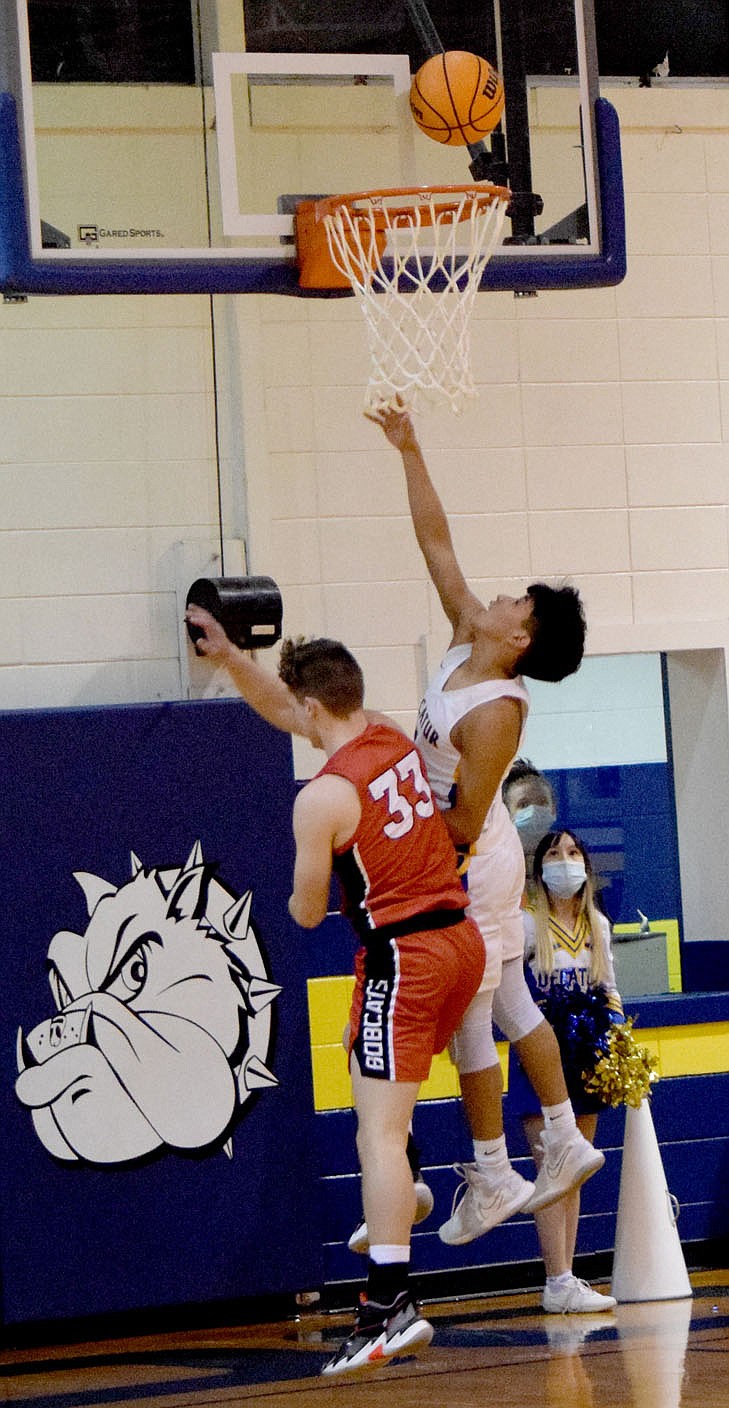 Westside Eagle Observer/MIKE ECKELS in spite of Bobcat Gabriel Davis' attempt to block, Edger Herrera manage to bounce the ball off of the backboard and through the net for a field goal late in the first quarter of the Decatur-Flippin boys basketball game in Decatur Feb. 9. Herrera was fouled before the shot so the basket did not count. He did manage to make the second of two free throws for his only point of the two-quarter contest.