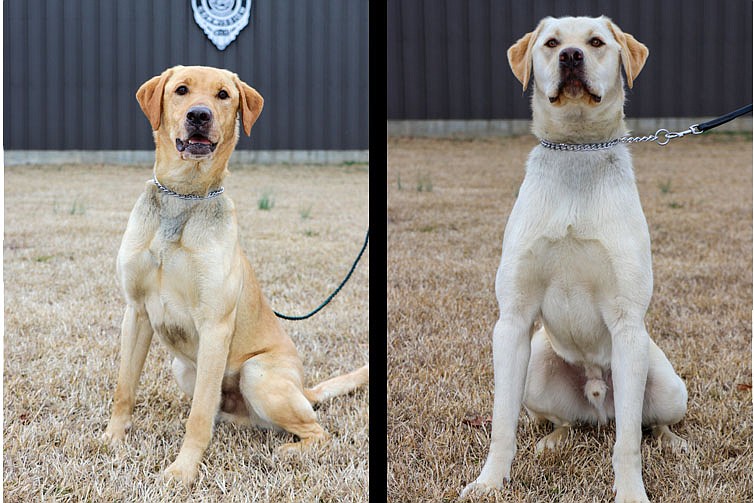 Courtesy photo The two dogs are Tucker (left) and Dax and are both male Labrador retrievers. Tucker, an 18-month-old, is a rescue dog, while Dax is a two-and-a-half-year-old who was donated to the program by a previous owner.

MAYFLOWER -- The Arkansas Game and Fish Commission's Enforcement Training Center sees new recruits every year, but this year's class will include two "cadets" who see things from a four-legged perspective. The AGFC's popular K-9 program is currently training two new dogs to help with enforcement efforts.

The two dogs, Tucker and Dax, are both male Labrador retrievers. Tucker, an 18-month-old, is a rescue dog, while Dax is a 2½-year-old who was donated to the program by a previous owner.

Lt. Brian Aston, who oversees the Special Operations Section of the AGFC's Enforcement Division, says the agency uses sporting breeds because they are best suited for the functions of the job.

"Labrador retrievers that have a high hunt drive excel at the skills our officers use most," Aston said. "We use them for tracking people, evidence recovery, and wildlife detection. After basic training, our dogs can do all of that."

Aston says the dogs also serve as ambassadors to the public for the agency, and no dog represents Arkansas outdoors quite as much as the Labrador.

"It doesn't matter if you hunt or not, just about everyone has either owned or knew someone who owned a Labrador," Aston said. "That helps make a connection with folks and break down some of the barriers people have about approaching law enforcement officers."

Aston said the public relations component of the unit did see setbacks last year due to covid-19 and the cancellation of many events and school programs, but the unit still managed 6,000 contacts in a PR role last year.

"In a typical year, we would have seen more than 30,000 contacts, and we hope to resume those sorts of numbers as social distancing restrictions allow more opportunities to do so," Aston said.

Cpl. Gary Stell, who coordinates the K-9 unit's training and use, says he is also interested in incorporating a pointing breed into the program.

"A lot of states have had good results with German Shorthaired pointers, so we may be looking at mixing one of those into the program soon," Stell said. "A pointer could help promote all the recent work the agency has focused on quail, too."

Tucker and Dax will replace two previous K-9s that were recently retired, keeping the program at 10 dogs statewide. Dax will replace K-9 Happy, that served for 8 years and made many arrests possible. Tucker will take the place of K-9 Aveda, a rescue lab from Florida that served 5 years, and also made many cases, including locating evidence involved in a homicide investigation in her district. Both retired K-9s will now live as pets with their previous handlers, which is often the case.

Each dog will complete 500 hours of training alongside its new handler and will live with that handler 24 hours a day.

"It's truly a full-time commitment," Aston said. "Even when you're off duty, you take care of the dog at your own home and keep up its training. So assigning handlers for the K-9 unit isn't something we take lightly. Cpl. Keith Teague will work with Tucker in Howard County, and Wildlife Officer Barry Robinson will work alongside Dax here in Pulaski County."

The AGFC K-9 unit was established in 1999 with Wildlife Officers Chris Carpenter and Frankie Tucker being the unit's first two handlers. They learned the training techniques from a K-9 school in Florida and brought the method back to The Natural State.

That training is based on a reward system. Since the dogs selected for the program are retrieving breeds, the reward of choice is playing ball.

"They love to play fetch with a tennis ball, so that's what we use as an incentive," Stell said. "When the dogs do their job, they get some playtime. It may look like fun and games, but the results are serious."

Stell says one of the most common uses of K-9s to enforce hunting regulations is by using their keen noses to track where people have gone after they've left for the day.

"We will drive through a wildlife management area and mark where people have parked their trucks and record license plates," Stell said. "Then, after they're done hunting for the day, we'll use the dog to track where they went and make sure there's no evidence of baiting or other wildlife violations. If the hunter was breaking the law, we will pay them a visit or set up for their return. That way lawful hunters never even have to be bothered during their hunts while we do our job."

Aston says finding illegally taken game and firearms that people have abandoned in the woods also is a chore for AGFC K-9s. Poachers often will abandon their gun or game animals when they see a wildlife officer's truck, thinking they can skirt the law and return to collect the ill-gotten gains later. AGFC K-9s often foil these attempts.

AGFC K-9s also play a key role in search-and-rescue operations as well as assisting other law enforcement agencies in their districts.

"We get calls from sheriff's departments and local police departments and assist whenever we can to help them out," Stell said. "The skillset our K-9s have can be valuable for all law enforcement, and we've been able to really help the people of Arkansas with these dogs."