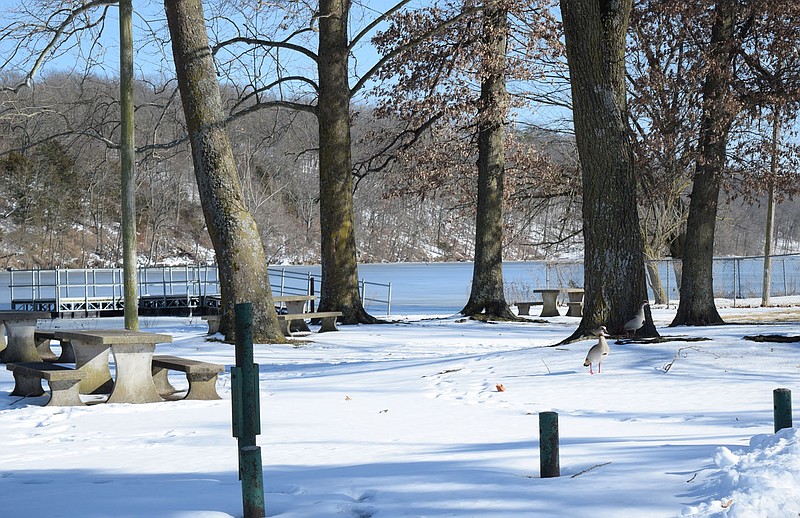 Westside Eagle Observer/MIKE ECKELS Crystal Lake Park is covered with four inches of snow Feb. 20 after a series of winter storms coupled with an extremely dangerous Arctic air mass left the lake and park a frozen wasteland. A pair of Egyptian Geese (center right) looks for food which was left by a bird watcher.

DECATUR -- Like so many bodies of water throughout the Midwest over the last three weeks, Crystal Lake underwent a transformation from a fishing lake to a frozen oasis.

The transformation began around Feb. 5 when temperatures began to take a nose dive due to an invasion from an extremely dangerous Arctic air mass. The strong Arctic cold drove down across Canada and invaded the upper Midwest, dropping temperatures into the single digits early in the weather event.

As the air mass moved south, temperatures in Arkansas, Oklahoma, Missouri and Kansas dropped below the freezing mark and even below zero, causing local lakes and streams to begin freezing over.

For the first time since January 2014, Crystal Lake began to freeze over. The cold weather lasted for six weeks in 2014.

When Winter Storms Uri and Viola dropped snow over the area, some stuck to the surface of the overflow pond, shallow coves and along the shoreline, parts of the lake that began to freeze first.

Since Crystal Lake Road was completely covered, Decatur police closed it off for safety reasons. Had anyone managed to make it onto the lake and fell through, rescuers would be unlikely to reach any victims in time.

Fortunately for the flying community, Lance Dixon, with Dixon Aviation, cleared snow off of the runway and parking area at Crystal Lake Airport. Dixon kept the airport runway cleared throughout the extreme weather should anyone need to use the runway.

When the sun finally came out on Feb. 18 and temperatures began to rise above freezing, things began to thaw.

With wintry weather, Crystal Lake became a photographer's paradise, but it still had hidden dangers since the thickness of the ice was not known.

Decatur police strongly urged people to stay off the ice. 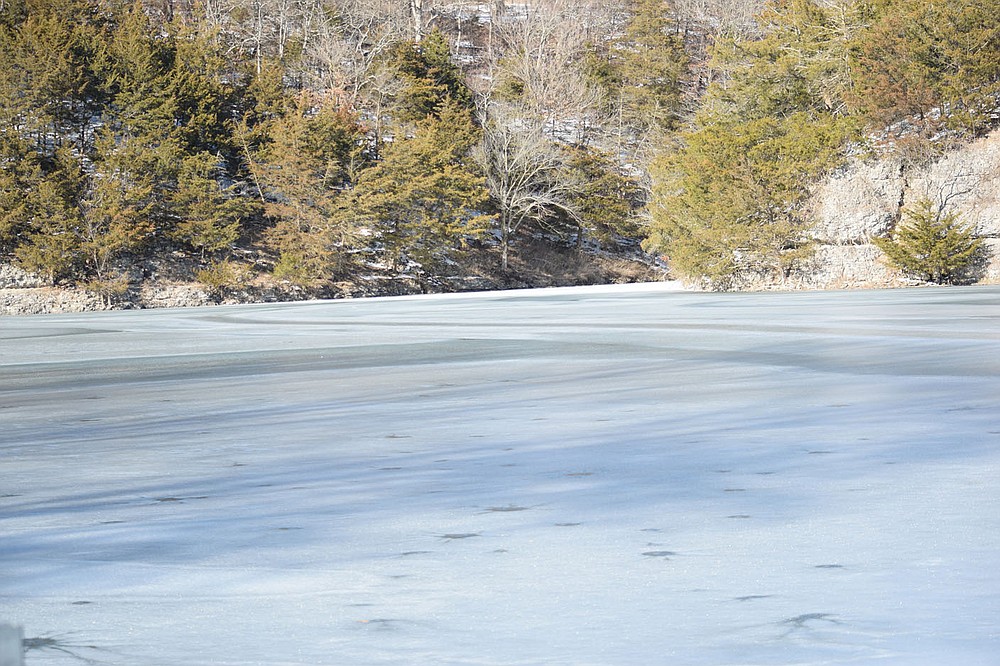 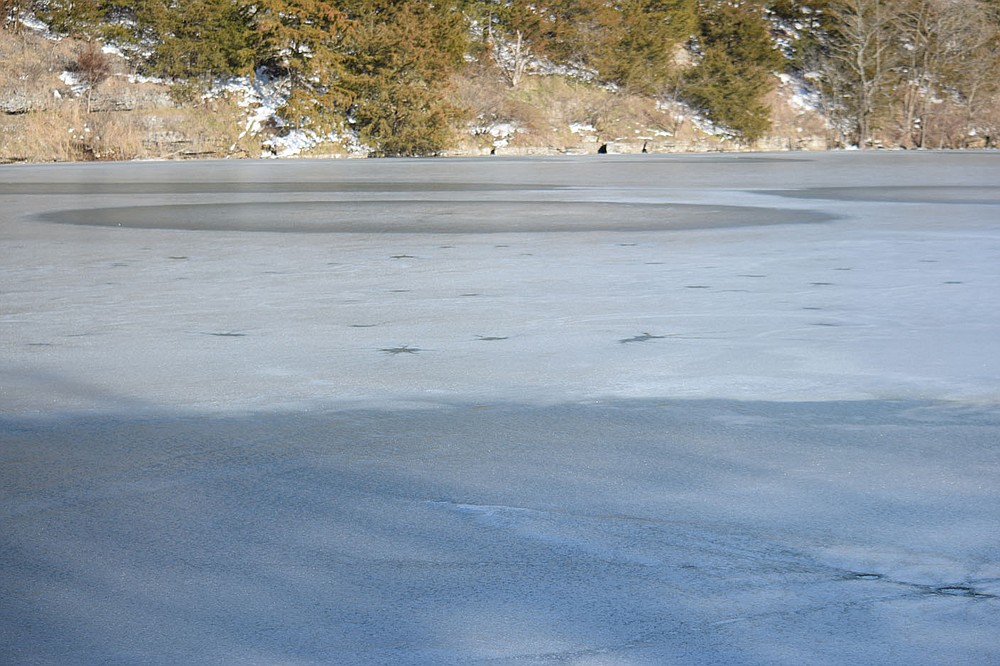 Westside Eagle Observer/MIKE ECKELS Strange circles of ice cover several areas on Crystal Lake near Decatur Saturday afternoon after 10 days of sub-freezing temperatures caused the lake to freeze over. The circles indicate areas where the ice is thinnest. For safety reasons, Decatur police and fire officials asked the public to stay off the ice since the thickness is not known. 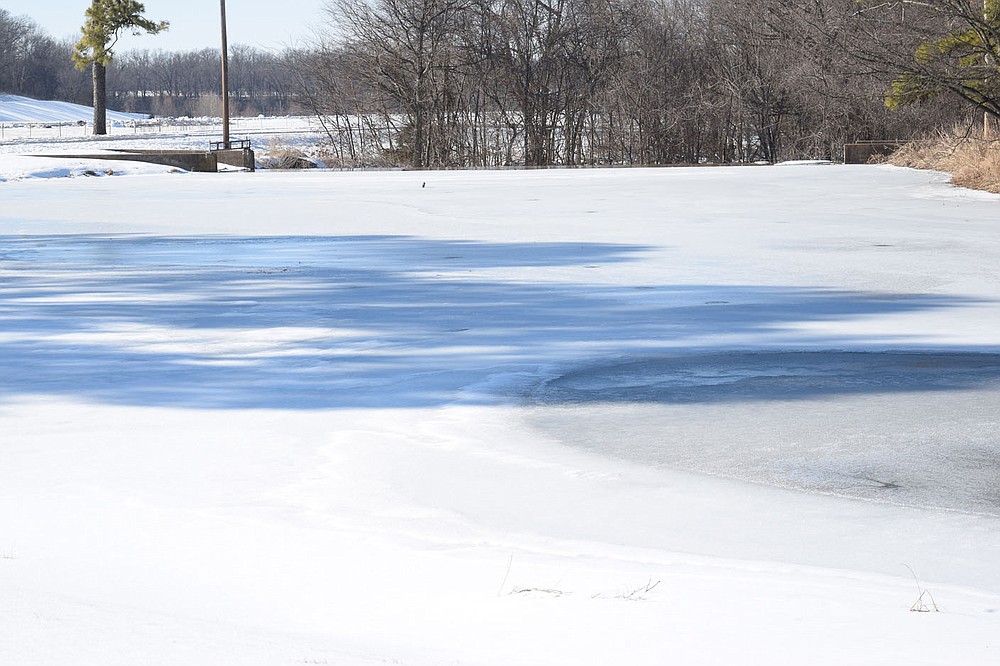 Westside Eagle Observer/MIKE ECKELS Snow covered ice covers the overflow pond at Crystal Lake Saturday afternoon after an Arctic air mass brought extremely dangerous subfreezing temperatures and wind chill values to 20 below zero over a 10 day period. Decatur Police and Fire Department officials asked the public to stay off the ice since the thickness may not fully support the weight of a human or animal. 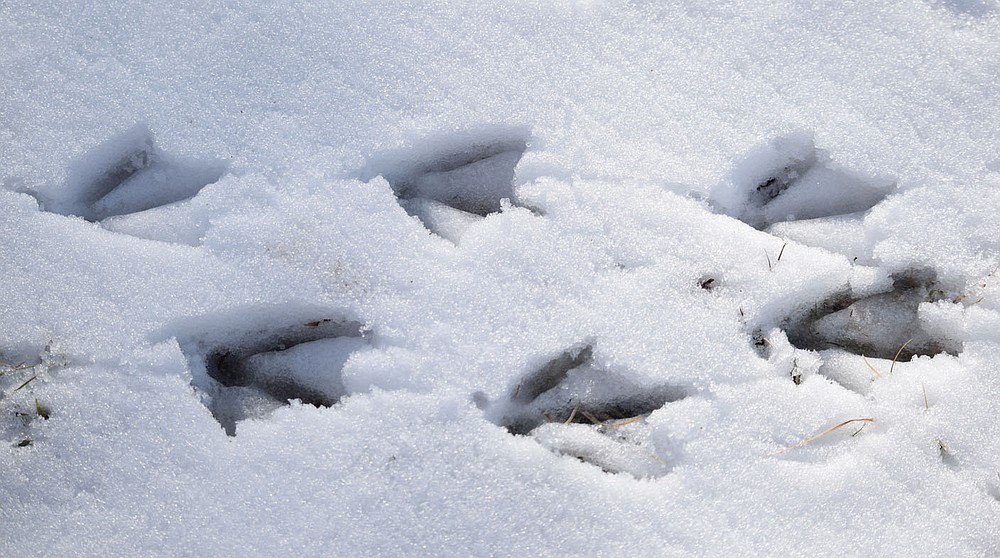 Westside Eagle Observer/MIKE ECKELS Tracks made by a pair of Egyptian Geese penetrate the snow cover at Crystal Lake Park near Decatur Feb. 20 after Winter Storms Uri and Viola dropped between five and eight inches of snow in Northwest Arkansas Feb. 12-17. 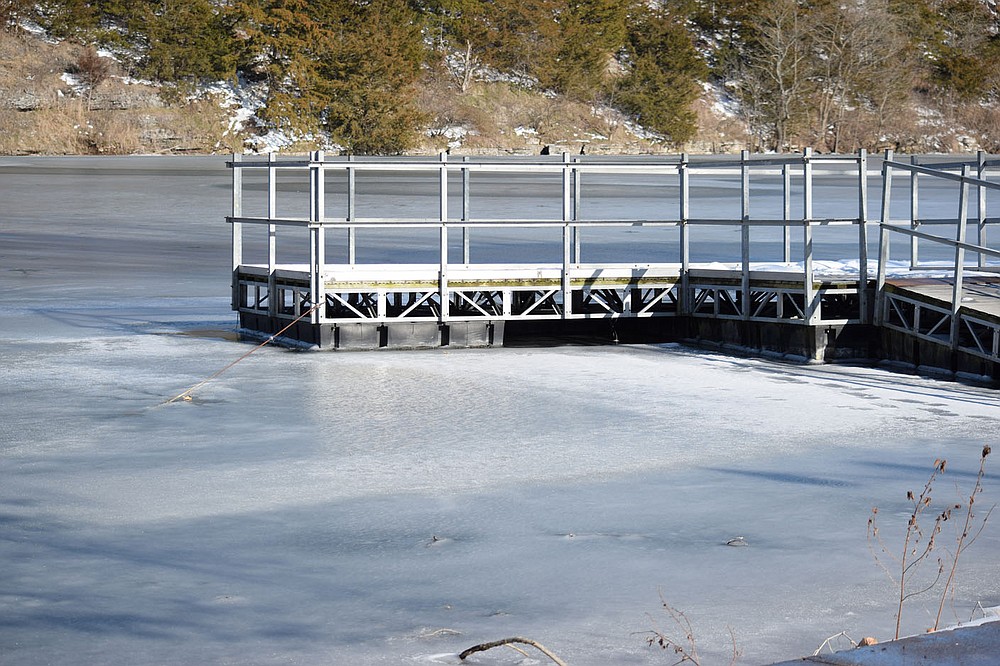 Westside Eagle Observer/MIKE ECKELS The boat dock at Crystal Lake is surrounded by ice left over from an extremely dangerous Arctic air mass that encompasses over half of the United State for over 10 days. Warmer weather Feb. 20 started to thaw the snow and ice on the lake, creating dangerous conditions for anyone who tries to walk on the thinning ice. 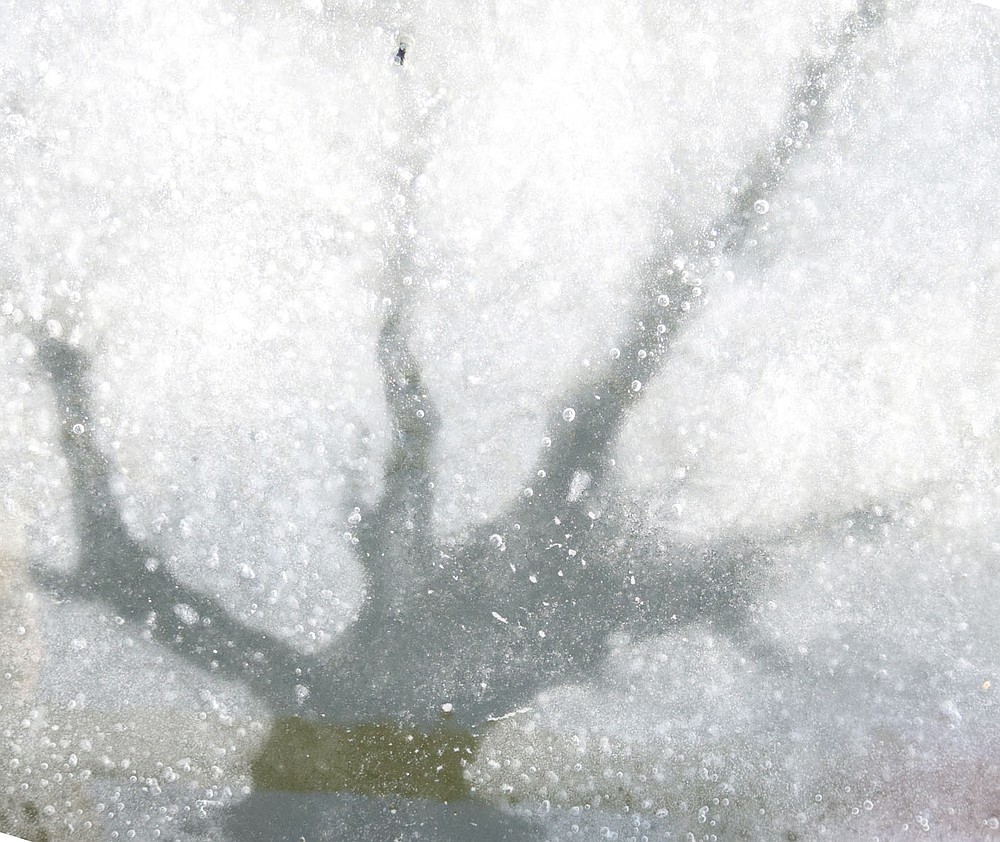 Westside Eagle Observer/MIKE ECKELS A crack in the ice at Decatur's Crystal Lake freezes over after over a week of temperatures below freezing and wind chill indexes of nearly 20 below zero. This crack was beginning to open back up after two days of sunshine and weather above freezing began a long thaw across the lake.
ADVERTISEMENT