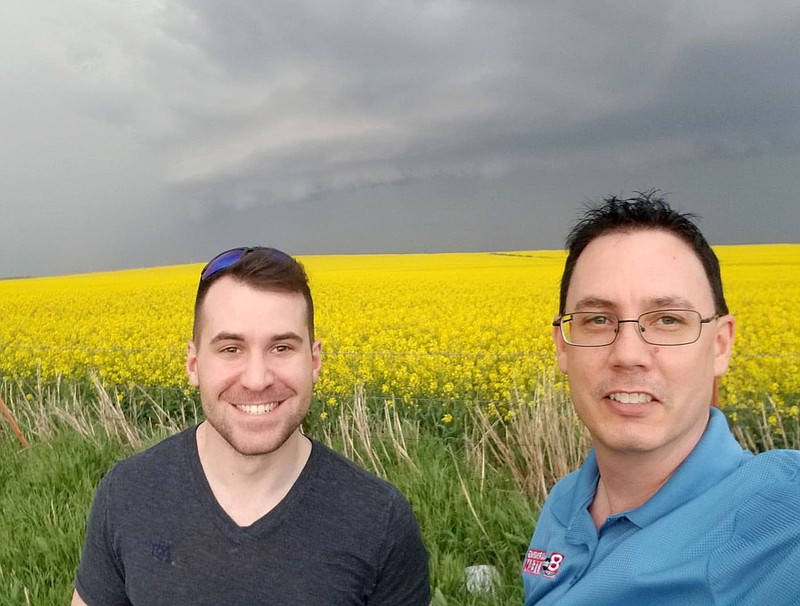 SILOAM SPRINGS -- For James Hilger, there is nothing like the feeling of being near a tornado.

The Siloam Springs-based storm chaser follows storms in Northwest Arkansas and northeast Oklahoma and also travels to a much wider area such as Colorado, Texas and the Oklahoma panhandle.

He shoots videos and reports conditions to local TV stations, such as KNWA in Northwest Arkansas and KTUL in Tulsa, Okla., and creates videos for Live Storms Media.

He also takes clients and photographers on chases and helps them stay safe while getting a close-up view of storms.

Hilger was born in California and grew up in southwest Missouri. He said he's always been interested in weather and started chasing storms in 1999.

In 2010, he got more serious and began chasing professionally, he said.

Hilger has learned storm chasing from experience. He has modified his vehicle, adding nine coats of bed liner to the exterior and two layers of ballistic film to the windows, headlights and taillights to protect them from storms. He uses laptops, global positioning systems and other technology to track storms from inside his vehicle.

While chasing in his viewing area of Northwest Arkansas and northeast Oklahoma, Hilger is all business. Storms move quickly through the area and hills and trees make them unpredictable and hard to watch, he said.

Chasing on the plains, where the landscape is wide-open and the road grid is closer together and offers options to go any direction is much easier and more enjoyable, he said.

The furthest Hilger has driven nonstop in a day is 1,000 miles, when he went out into the Oklahoma panhandle and then came back. Sometimes Hilger does a lot of driving in a small area as conditions change and he tries to find the best angle on a storm.

"Every chase is different," he said. "It's a cat and mouse game."

Hilger said he loves the adrenaline rush of being near a storm.

"I love being right next to it, feeling the high winds, the inflow, there is nothing like it," he said.

Jodie Boswell of Isanti, Minn., and her husband Danny went storm chasing with Hilger in May 2019. Jodie said her husband, who is a native of Carthage, Mo., knew Hilger from living in southwest Missouri.

The Boswells met Hilger and they spent three days chasing storms in Oklahoma, Arkansas and Texas. They didn't see any tornadoes but did see plenty of cloud formations and took tons of photos. Then a few days later, the couple met up with Hilger again just in time to see the Golden City, Mo., tornado on May 22, the anniversary of the deadly 2011 Joplin, Mo., tornado.

The EF-3 tornado in Golden City stayed on the ground for 12 miles, according to the National Weather Service website, weather.gov.

Hilger said the look on Boswell's face as she saw the tornado was unforgettable.

"Jodie was just beaming, she had this big old smile," he said.

Chasing takes lots of patience to sit in a car and do a lot of driving to track the shifting positions of the storm, Boswell said.

"It's an experience that I had that I am grateful for and I would do it in a heartbeat again," she said. "It's the perfect amount of excitement all the way around. If you get a chance to, you should go for it and cross it off your bucket list."

Hilger is very safe and doesn't put himself or anyone else in a dangerous situation, Boswell said.

"James is really good, he is very knowledgeable," she said.

Chasing storms isn't just about excitement; it has a much more serious and sobering side. Hilger reports and creates videos about all kinds of extreme weather, including the winter weather Siloam Springs was experiencing last week.

"Our experience is that a lot of people go outside when the sirens sound or just ignore the warnings in general," Hilger said. "They'll even gripe about their show being interrupted. Actually seeing it live seems to get a reaction to take shelter. Also, seeing the damage history of current storms coming this way gets others to take it more seriously."

Storm chasers can report visually persistent signs of rotation at the base of the storm or other clues that help meteorologists gauge the chances of the storm producing a tornado, Hilger said. Hail and wind are also a big concern and advance warnings let people know to bring their vehicles or animals inside before the storm hits. Straight-line wind is another serious concern that can be very dangerous, he said.

After storms pass, Hilger sometimes helps with recovery efforts. If emergency personnel are on the scene, he tries to stay out of their way. However, if emergency crews aren't there, he calls in the situation to emergency services and starts looking for survivors.

While 2020 was a rather quiet year, 2021 is predicted to be a more active tornado season, Hilger said. He's looking forward to chasing season, which can be year-round, but peaks in this area from April through June. 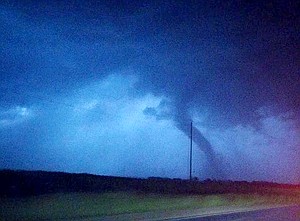 Photo submitted Jodie Boswell of Isanti, Minn., caught a photo of the Golden City, Mo., tornado on May 22, 2019 while chasing severe storms with James Hilger of Siloam Springs. 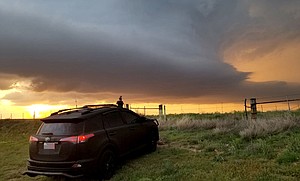 Janelle Jessen may be reached by email at [email protected]