Bulldogs fall to the Griffins in final contest of 2020

Westside Eagle Observer/MIKE ECKELS Bulldog Trevor Girdnor (31) puts up a jumper from the middle of the key during the Thursday afternoon Decatur-Ozark Catholic Academy basketball contest in Decatur. The Griffins overwhelmed the Bulldogs in the fourth quarter to claim the win 56-40.

DECATUR -- In the final battle of 2020, the Decatur Bulldogs played host to the Ozark Catholic Academy Griffins from Tontitown Thursday afternoon at Peterson Gym in Decatur. While the Bulldogs played hard throughout the 32-minute contest, the team could not overcome a fourth-quarter shooting slump that eventually sealed its fate.

The matchup between the Bulldogs and Griffins was a makeup contest from last November which was canceled due to covid-19 concerns by Ozark Catholic at the time.

Ashton Eford got things started for the Griffins, hitting a field goal with less than a minute off the clock in the first quarter. The Griffins hit another field goal on their next possession and extended the lead to four. Less than two minutes later, a foul by the Griffins sent Kevin Garcia to the free-throw line for the Bulldogs. Garcia hit both free throws to pull Decatur to within two. Both teams' shooting games went cold until the two-minute mark when the Griffins hit a run that extended their lead to nine. Ozark Catholic took a 14-5 lead going into the second quarter.

Both teams came alive in the second quarter, with the Griffins taking the edge, 14-10, to take a 26-15 lead into the halftime break.

Decatur came out strong in the third quarter, outscoring Ozark Catholic 12-9, but the Bulldogs failed to make up any ground on the Griffins lead. The Griffins took a 35-12 lead into the final eight minutes of the contest.

The Bulldogs went on a run midway through the fourth quarter, fighting to within eight points with four minutes left to play. Unfortunately, this was as close as the Bulldogs would come to cutting into the Griffin lead. Ozark Catholic took the victory, 56-40, over the Decatur Bulldogs.

Leading the scoring effort for the Bulldogs was Garcia with 10, followed by Bryson Funk with eight, Deegan Brooks and Trevor Girdner with six points each, Enrique Rubi and Carlos Hernandez each with three, Ben Watkins and JJ Herrera with two points each.

Ozark Christian Academy had three players in double figures, including Isaac McClinton with 18, Johnathan Cass with 12 and Perrin Lunsford with 10. Rounding out the scoring effort for the Griffins were Jackson Holmes with six, Nate Webster with four, Ervin Sanchez, Ashton Eford and Presston Eford each with two points apiece.

In an earlier game, the Decatur junior high boys faced Ozark Catholic in a 24-minute contest. It was all the junior high Griffins as the team took the win, 42-12.

Three Bulldogs scored points in the game, including Brian Ruiz with eight, Jaydan Gonzales with three and Jose Uribe with one.

Peyton Goldschmitt was the only Ozark Catholic junior high player in double figures with 14 points. Other Griffins contributing to the scoring effort included Tyler Thomas and Conner Lang each with six, John Paul Schaefer with five (including the first two points of the contest), Carlos Ortiz and Sam Gerton with four, Doc Abide with two and Michael Schultz with one. 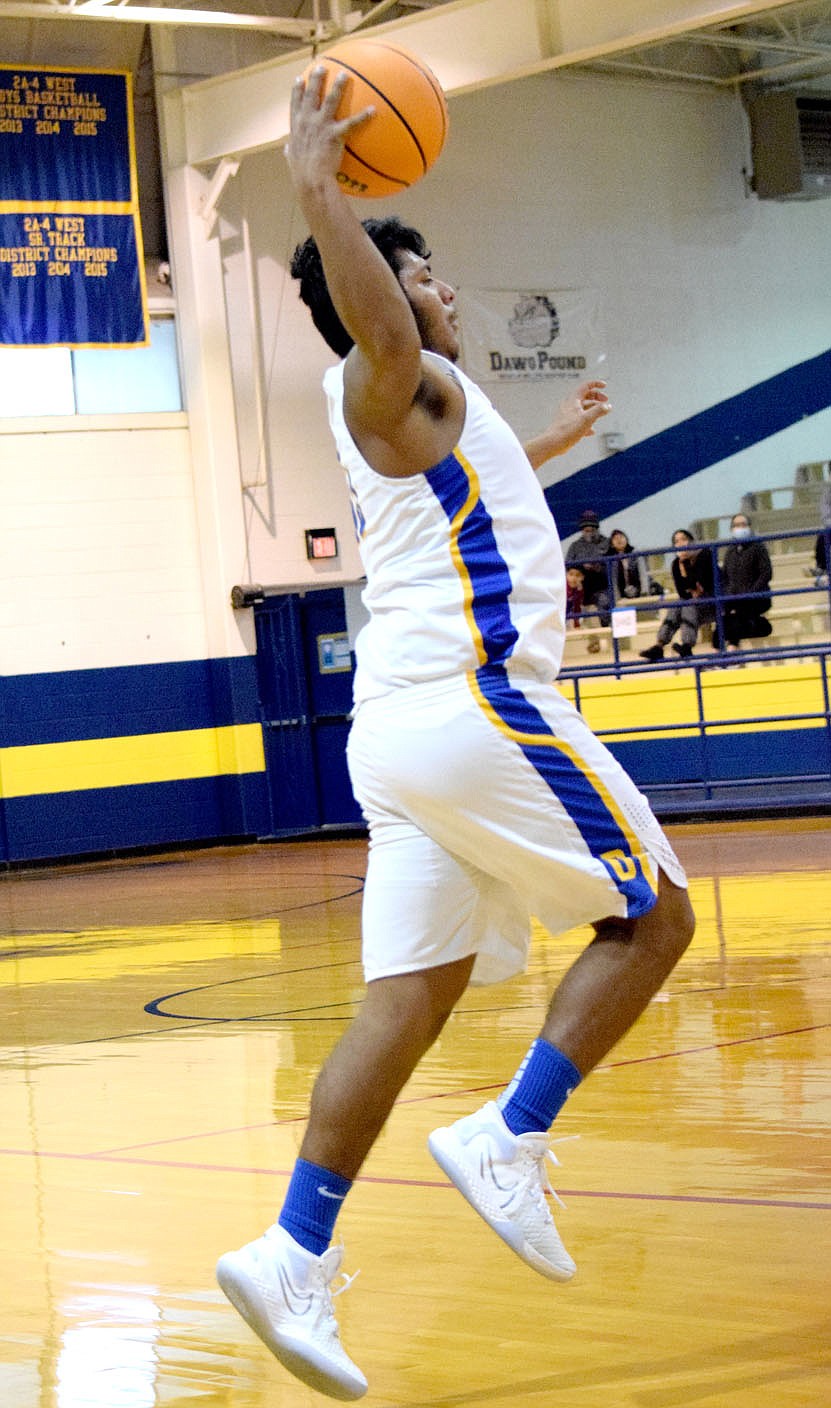 Westside Eagle Observer/MIKE ECKELS Carlos Hernandez goes up high to catch a high pass during the final seconds of the third quarter of the Decatur-Ozark Catholic Academy basketball game in Decatur Thursday afternoon. Hernandez passed the ball back to a teammate as time ran out in the quarter. 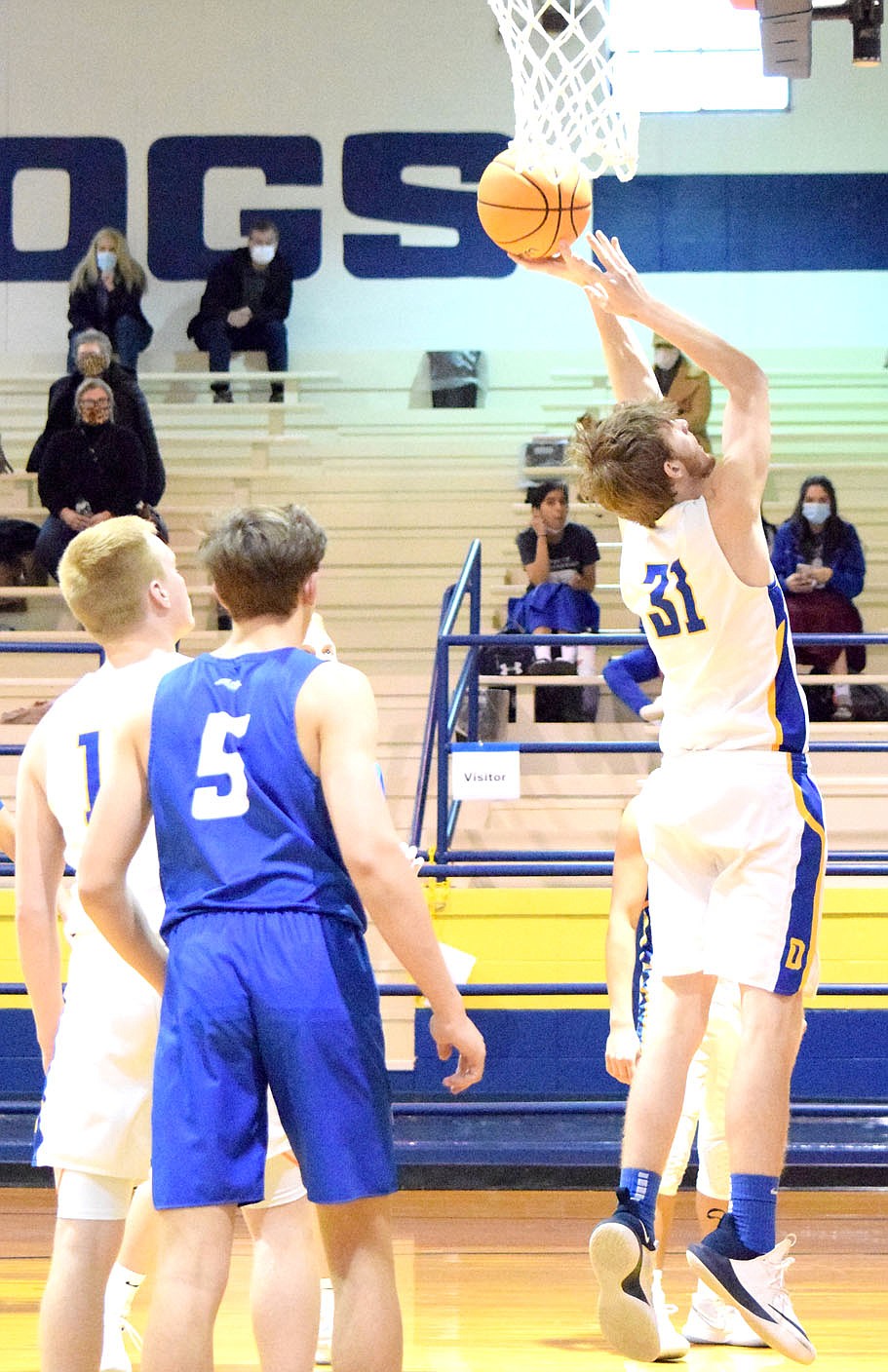 Westside Eagle Observer/MIKE ECKELS Bulldog Trevor Girdnor (31) fights for a Griffin rebound during the second quarter of the Decatur-Ozark Catholic Academy varsity basketball contest at Peterson Gym Thursday afternoon. Girdnor was able to pull down the ball and dribble it away from the Griffin net and into Bulldog territory. 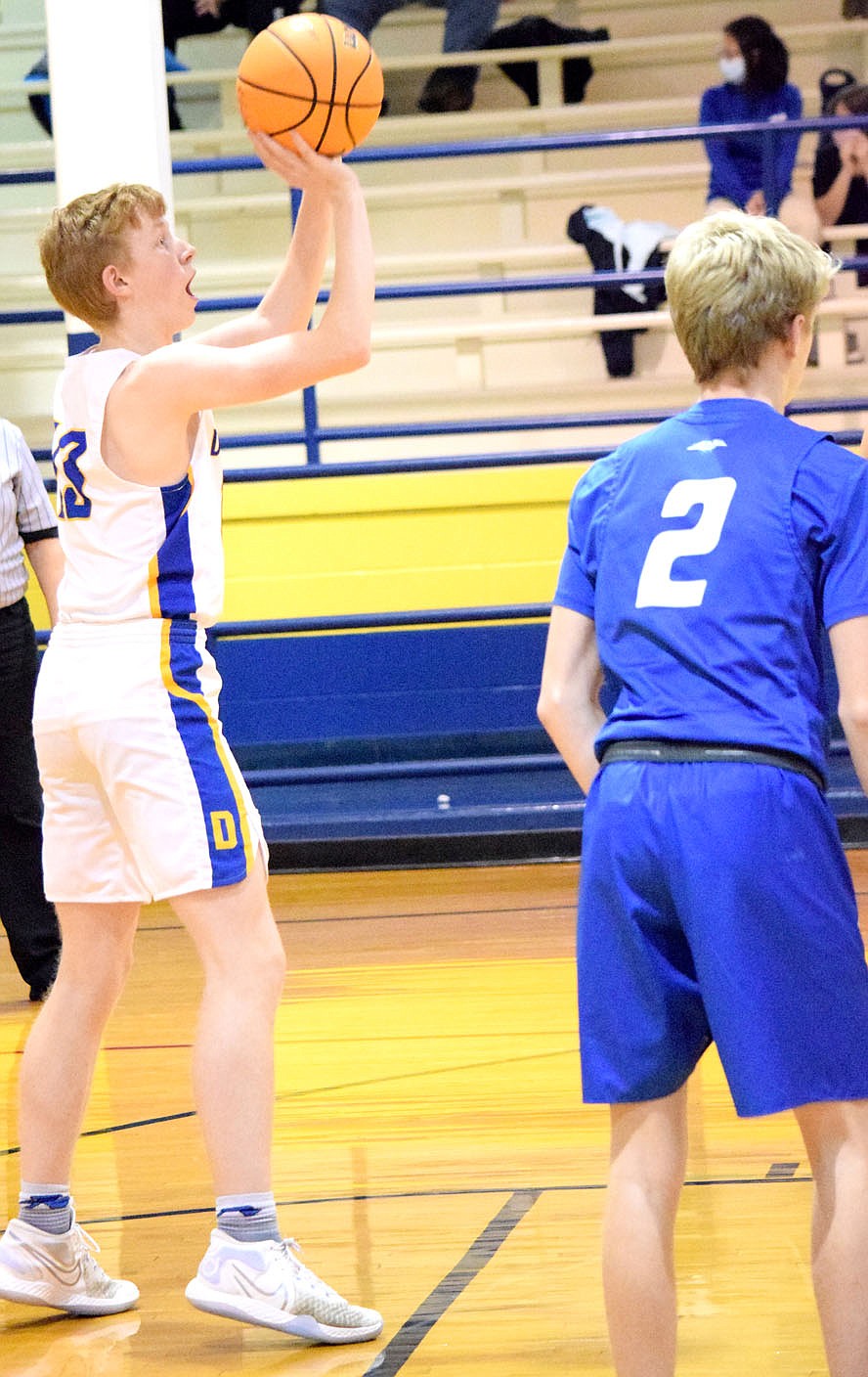