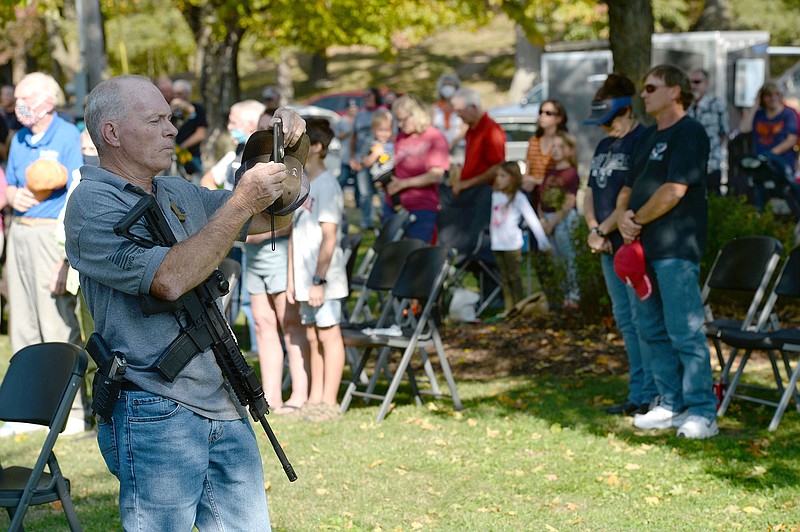 Richard "Bigo" Barnett videos a procession of officials walking Wednesday, Oct. 7, 2020, during a ceremony to welcome the Patriots, God and Country Tour to the area at the Veterans Wall of Honor in Bella Vista. Visit nwaonline.com/210107Daily/ for today's photo gallery. (NWA Democrat-Gazette/Andy Shupe)

Richard "Bigo" Barnett of Gravette stood outside the U.S. Capitol on Wednesday, his shirt ripped open and his chest bared to the cold, bragging about how he had gotten into the office of House Speaker Nancy Pelosi.

He brandished an envelope with the speaker's letterhead.

"I left a quarter on her desk for it," he told The New York Times, adding, "I wrote her a nasty note, put my feet up on her desk."

Barnett, 60, was among the protesters who entered the Capitol. Some exited the building bearing items they had ripped off walls. A few carried "Area Closed" signs they had stormed past, but objects from Pelosi's office were especially popular.

Gravette Mayor Kurt Maddox and District 11 Justice of the Peace Dustin Todd, whose district includes Gravette and the surrounding area, confirmed to the Northwest Arkansas Democrat-Gazette that Barnett was the man captured in a widely circulated photo showing him sitting with his foot propped up on the House speaker's desk.

Efforts by the Northwest Arkansas Democrat-Gazette to reach Barnett on the night of Jan. 6 were unsuccessful. Two cell phone numbers had mailboxes that were full, and a landline was disconnected.

Barnett is active in local civic and gun rights causes and has been featured several times in local news articles.

He is a registered voter in Benton County whose party affiliation is listed as "optional." Barnett voted in general elections in 2000, 2008, 2010, 2016 and 2020, according to information from the County Clerk's Office.

Maddox said Barnett is from Gravette and lives in a nearby community; he is not a town citizen. The mayor said he doesn't know Barnett personally but that he had conferred with his police chief, who confirmed Barnett's home is outside the city limits.

A picture of Barnett appeared in a "Northwest Arkansas Democrat-Gazette" photograph gallery Oct. 7 during a ceremony to welcome the Patriots, God and Country Tour to the Veterans Wall of Honor in Bella Vista.

He was photographed again on Oct. 14 while presenting a $1,000 check from money raised at a Back the Blue rally to the Sulphur Springs police chief to purchase body cameras.

Photographs of Barnett also were published in the "Westside Eagle Observer" twice in October. He was featured Oct. 21 at a Back the Blue Rally in Rogers, which was sponsored by the 2nd Amendment rights group 2A NWA STAND! Barnett appeared again Oct. 28 in a photograph posing with adults and children holding rifles at a fundraiser on his property south of Gravette. Barnett and his group 2A NWA STAND! hosted a photoshoot and fundraiser for Paula Joy and her group, Save Our Children, according to the caption that accompanied the photograph.

The fundraiser brought in more than $1,000 for Operation Underground Railroad, a nonprofit which assists governments around the world in the rescue of human trafficking and sex trafficking victims, with a special emphasis on children.

NWA Democrat-Gazette reporter Mike Jones also contributed to this story. Doug Thompson can be reached by email at [email protected] or on Twitter @NWADoug